It seems that the harder it is to access a haunted location, the scarier the ghost stories tend to be, and they don’t get much creepier than that of Grandpa, the spirit haunting the submerged wreck of the SS Kamloops. Encounters with Grandpa have proven to be extra scary because he’s not just any ghost – he inhabits a well-preserved corpse, nicknamed Old Whitey, that has remained trapped in the downed ship for nearly a century.

Way back in the early 1920s, Grandpa, whose true name has been lost to time, was a crewman on the SS Kamloops, a kind of freighter specially-built to fit through the old Welland Canal, which connected Lake Erie and Lake Ontario. The Kamloops and her small crew of about two dozen spent most of their time running cargo along the Canadian shore, from Montreal to Fort William

On the night of December 6th, 1927, Lake Superior was in the grips of a violent winter storm, and the SS Kamloops was struggling to make its way through the waves, accompanied by the steamer ship Quedoc. In the middle of a particularly nasty gale, the captain of the Quedoc spotted a dark mass rise up out of the waters, and quickly turned course, warning the Kamloops, which was shrouded in the thick fog. The Quedoc made it to Fort William safe and sound, but the Kamloops would never arrive. The last time she was seen was near the southeast end of Isle Royale, coated in a thick sheet of ice.

Search parties were sent out through the Great Lakes, all of them turning up no evidence of the ship, and on the 26th, three weeks after the ship’s disappearance, winter weather came down hard, as did hope for the Kamloops‘ crew, and the search was halted. The official record states that all of the ship’s crew were lost.

While no one is quite sure what caused the Kamloops to sink, the few clues that were discovered paint a pretty horrific picture.  It wasn’t until the spring that the first signs of the Kamloops’ demise were discovered by fishermen of Isle Royale. Scattered across the island were the remains of nine crew members who had managed to escape on a lifeboat. Some were found huddled near a makeshift fire pit, others washed up on the shore. The ones who weren’t frozen to death appeared to have been partially eaten by the island’s wolf population. The Kamloops, on the other hand, was nowhere to be found. It went down in history as one of the Ghost Ships of the Great Lakes, dozens of ships to mysteriously vanish without a trace. It retained this status for fifty years, until it was discovered at the bottom of Lake Superior, in nearly perfect condition, just off Twelve O’Clock Point on the north coast of Isle Royale. It appeared to have lost power and slid down an underwater incline, coming to rest on its side.

Divers who explored the ship couldn’t believe how well-preserved it was. The holds of the Kamloops were filled with farm machinery once destined for the Canadian plains, but even the food was in incredible condition. Since Lake Superior only ever reaches a few degrees above freezing at its depths, the icy water acted a kind of natural refrigerator. Coupled with a relative lack of life at the bottom of the lake, even things like clothing and leather shoes, still stored neatly in crew cabins, were perfectly preserved, lending a dreamlike eeriness to the exploration of the sunken ship. 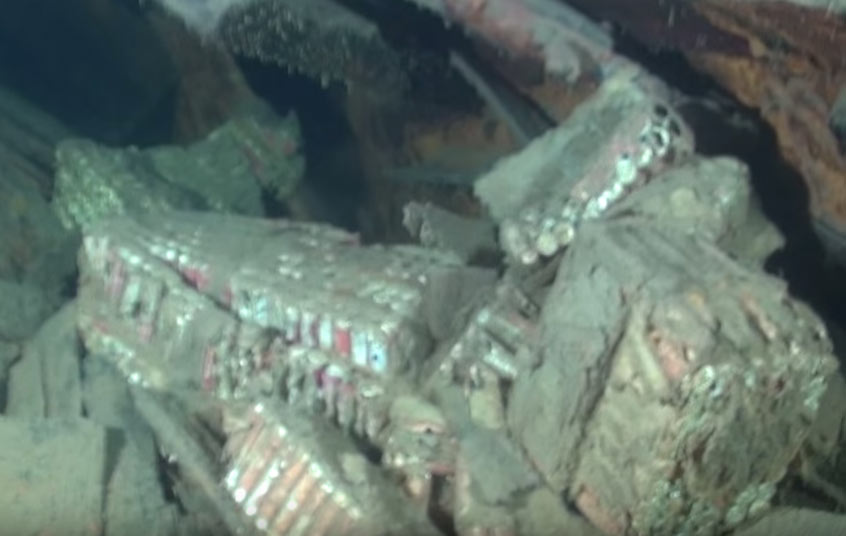 Considering the depth and temperature of the waters, the dive was reserved for only the most experienced, which meant that relatively few explorers got to wander through sunken bowels of the Kamloops. The ones who did, though, began to resurface with frightening tales. It would seem that at least one of the ship’s crew decided to stick around, and so many divers had “met” him that they even gave him a nickname: Grandpa.

As exploration of the Kamloops grew, whispers of Grandpa began to make the rounds in diving circles. Some divers reported seeing the pale white ghost kicked back in one of the crew bunks, quietly and calmly watching the explorers make their way through the sunken ship. Others claimed he would wander the boat, oblivious to the fact that it was sitting at the bottom of Lake Superior, going about his business as if he were still alive. Then there were others who reported something even more frightening: that Grandpa would follow them as they made their way through the ship, and that he wasn’t just a ghost… he was physical. Grandpa, they claimed, would actually reach out and touch them.

It turns out that the frigid waters of Lake Superior had not just refrigerated farm equipment and foodstuffs, it had perfectly preserved one of the 13 crewmen who never made it ashore. His body stiff and his skin white as snow, the nameless member of the Kamloops crew had floated inside the ship for fifty years, alone until the divers began to occasionally filter in. Some had taken to calling him “Old Whitey”, but those who’d heard the stories of ghostly encounters knew the truth: this was Grandpa’s body. Explorers began to take notice of how Grandpa’s corpse would follow them from the time they entered the ship until they left. Some of them rationalized it as currents, but others insisted that there was something unnatural, even intelligent, about the way Grandpa moved. Some even returned saying that they had seen Grandpa’s ghost and his body in the same trip, though never in the same room.

Despite how frightening a visit from Grandpa was, there was never any reason for alarm. He never attempted to hurt or drown anyone, and never appeared angry or upset. Mostly, he just seemed happy to have some company. After all, it had been awhile. Even the corpse, though initially disturbing, floated peacefully along next to the divers, revealing small details like a wedding ring still attached to Old Whitey’s stiff fingers.

The ghost of Grandpa was just lonely.

Today, Grandpa’s well-preserved corpse is still floating in the wreck of the Kamloops, where he spends most of his time occupying the engine room. Dive logs are filled with notes about “shaking hands with Grandpa”, or “paying respects to Old Whitey”, and partially because of him, the National Parks Service has protected the shipwreck as a culture treasure, though they allow only the most experienced and respectful divers to explore the location.

We’re still no closer to understanding what made the SS Kamloops sink to her watery grave, or discovering exactly who Old Whitey really is, which may have something to do with the reason that Grandpa has stuck around his watery grave all these years. Perhaps there’s still a clue about the disaster he’s hoping someone will discover, a piece of his story that will let him rest. Until then, though, he’ll wait patiently for visitors, and relish the company.

Would you shake hands with Old Whitey? Tweet us @WeirdHQ, drop us a line on Facebook, and let us know if you’d explore the depths of the haunted SS Kamloops!