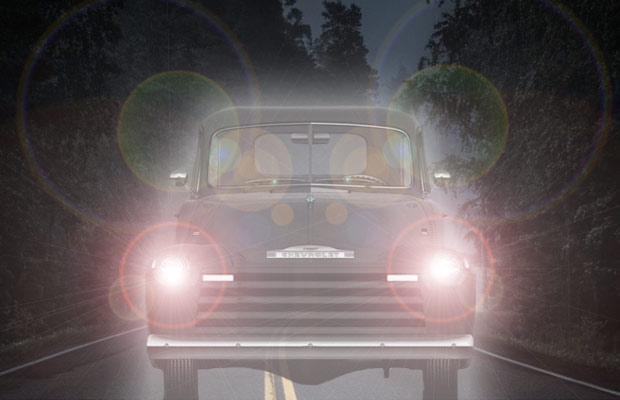 When we think of ghost stories, our minds usually conjure up visions of phantom soldiers, translucent ladies in white dresses, and creepy children in old-timey clothes, but in Maryland’s historic Ellicott City, the locals whisper tales of a stranger kind of haunting, one involving the ghost of a vehicle. For decades, the Demon Truck of Seven Hills Road has terrified residents, and when you hear the stories of their encounters with the four-wheeled phantom, you might find yourself afraid of ghost cars as well.

Just behind Ellicott City, often referred to as one of the most haunted cities in America, sit seven hills with a twisting, two-lane road running through them. It’s long been said that those who drive the stretch of pavement at night, hitting the seventh hill at the stroke of midnight, should beware the Demon Truck, a jet-black vehicle driven by a faceless entity. Those who’ve encountered the Demon Truck say it appears out of thin air, barreling down the road at a hundred miles an hour, hellbent on causing your vehicle to crash.. and crash they have.

“My brother Tim was one that lost his life on this road in 1971,” local resident Barb Pollihan sadly reflected on an online message board. “He wasn’t driving but with a group of teens that were joyriding. I can still see the picture of the twisted car on the cover of the Catonsville Times. Please don’t try to hit the 7th or any of the hills at anytime. This tragedy haunts me to this day.”

Seven Hills Road, actually named College Avenue, has claimed the lives of dozens of young drivers in the last decade alone, and injured hundreds more. A quick scan of Maryland newspapers turns up countless articles of car accidents on the legendary road outside Ellicott City, the majority of which can be linked to “Hill Hopping”, a late-night hobby linked to the Demon Truck summoning ritual. The deadly hills have seen so much vehicular carnage that it seems as if the ghostly truck was born out of the very act of death itself. On October 11 of November 2011, a family of four decided to investigate many of Ellicott City’s dark legends for themselves. After the sun went down, they hopped in the car and set off for Heartbeat Bridge (site of a local Crybaby Bridge legend), stopping to search for the ghosts of the abandoned Potapsco Women’s Institute, before deciding that it was time to test the “Ghost Car Myth”. It was an investigation that almost turned deadly.

“We made sure that no one was driving or walking so we could speed down the hills,” the youngest adventurer wrote. “We hit about ninety-three miles per hour and reached the end of the road. We had seen nothing. So we made a U-Turn and tried again. Still nothing. We tried this about five times and got nothing, so we decided that the “Ghost Car” myth, was really just a myth after all.”

The thing about ghost stories, though, is they never seem to end when you expect them to.

“We raced down the street a little after midnight just to enjoy the “butterfly” feelings we got in our stomachs when this dark-colored truck appeared almost out of nowhere. We had panicked and drove even faster, hitting about 98 miles per hour, hoping the the truck would slow down and back off. If only that had happened. The truck sped up right on our tail and we expected to get rear-ended. It was just our luck when we reached the end of the road and the truck disappeared. We don’t know what we experienced that night. We still think it was the “Ghost Car”, But we may never know. All I can say is I do believe in this “myth”. You may not believe, but I must say I do.”

This narrative is pretty common when it comes to the Demon Truck tale. A carload of skeptical-yet-adventurous kids head out to Seven Hills Road in search of a thrill, only to find themselves face-to-face with a black vehicle that stops just short of physical contact.

When I was 16 years old, my brother and I and some of our friends were out for one of our joy rides and just happened to come across 7 Hills by accident. It was well after midnight, and me being the levelheaded one, I wanted to go home, but my brother being the daredevil wanted to test the legend. It seemed like we were the only ones on the road. It was pitch black and dead silent when out of nowhere headlights were right on top of us. It freaked us out and thought the vehicle was going to ram into our car, but it didn’t. We sped up and pulled off the road, but when we calmed down enough to get back on the road the car was gone. It was nowhere and the road stretch for miles. Its like the Demon Truck appeared out of nowhere. I never forgot that experience and to this day will never drive the 7 Hills at night. – DH

No one is exactly sure when and how the Demon Truck first appeared, but the trees alongside Seven Hills Road bear the marks of the countless car accidents that have occurred over the years, many of which have forced the city to repave, install guard rails, and alter speed limits. In fact, new housing developments along College Avenue have changed the landscape considerably since the Demon Truck legend’s peak in the mid 90s. What was once a sparsely populated, spooky stretch of rough pavement is now a smooth, busy road lined with luxury homes. You might think think that such a stark change would dial down the spookiness of the Seven Hills legend, but as the land has adapted to the times, so has the haunting.

In the last few years, fewer and fewer people have encountered the sinister Demon Truck, and instead, have begun to report encounters with a strange, cloaked woman standing in the middle of the road. By the time the figure is spotted, it’s already too late, and drivers are forced to either veer off the road, or brace for impact, in which case, the entity disappears. “Last year me and two friends went out looking for the Ghost Car, and while we didn’t see any black trucks, we did see a strange woman walking down the center of the road,” one legend-seeker wrote. “She was wearing a black cloak with a hood.  Soon as we saw her, we slammed on the brakes but she didn’t pay any attention to us. When we passed her she looked up and into the car and we could see that she didn’t have any pupils. Freaked us the fuck out and we hit the gas but when we looked back she was gone. We all saw her so I know she was there.”

As Seven Hills becomes more and more populated, it seems the Demon Truck is gradually morphing into the Demon Lady. Interestingly enough, this isn’t even the first time the legend has evolved. According to long-time locals, the haunting never started with a ghostly vehicle at all, but an animal. Way back in the 60s, when the infamous Seven Hills Road was far spookier, the phantom drivers encountered was actually a black goat. The Demon Truck began to gradually appear in the 70s before finally “taking over” in the 80s. It’s almost as if the haunting is taking cues from the environment, adapting into whatever form is most likely to frighten the residents of Ellicott City at the time.

For now, the Demon Truck is still racing down Seven Hills Road, terrifying local kids who’ve gone looking for a midnight encounter with the dark spirit, but for how long? The Demon Lady is already being seen more frequently, and the Demon Goat long forgotten by all but the oldest Ellicott City locals. It seems just a matter of time before the ghostly vehicle of Seven Hills Road is gone for good.

Until then, if you’re ever on the outskirts of Ellicott City, Maryland, keep a close eye on the clock, because when the clock strikes 12:00am, you might want to pull over, just in case.

Have you ever witnessed a ghost car? Tweet us @WeirdHQ, drop us a line on Facebook, or start a conversation in the comments below!