Imagine, if you will, being stranded on a small island in the middle of nowhere. Now imagine that the island is haunted by the ghosts involved in a gruesome axe murder. Scary thought, right? Well, that island exists just two miles off the Gulf of Maine, and if you’re brave enough, you can spend the night investigating it’s paranormal activity. Welcome to Seguin Island, one of the most haunted places in New England.

Established in 1795, Seguin Island’s 64 acres is home to the second-oldest lighthouse in Maine, a building which holds the oldest Fresnel Lens in the state. Though the lighthouse, which was built in 1857, was automated in the mid 80s, it would seem that a few of the former lighthouse keepers have decided to stick around. For good. Life on the island would have been a very lonely one for both the keepers and their families, and sometimes, that loneliness can drive you mad. During the mid 1800s, the lighthouse keeper’s wife fell into a deep depression. In an attempt to raise the woman’s spirits, the lighthouse keeper made special arrangements to have piano shipped to the island, believing that all of their free time would be a great chance to learn music and provide each other with much-needed entertainment. Things didn’t quite work as planned.

The lighthouse keeper’s wife picked a song from a book, and for many months, she practiced at all hours of the day until she had mastered the tune. When her husband asked if she would like new sheet music shipped over from the mainland, she declined, continuing to play the same song over and over day in and day out. After months of being subjected to the same monotonous tune and driven mad by the torment of isolation, the lighthouse keeper snapped and destroyed the piano with an axe. Then, he took the axe to his wife. When he realized what he had done during his rage-induced fit, he took his own life.

To this day, visitors to the isolated island have reported hearing the haunting sound of piano music drifting softly from the lighthouse, only to discover that the building empty. Many believe the ghost of the lighthouse keeper’s wife has refused to leave the island, still playing her tune on a phantom piano. Some have even claimed to witness the ghostly visage of her husband trudging across the island, axe in hand. 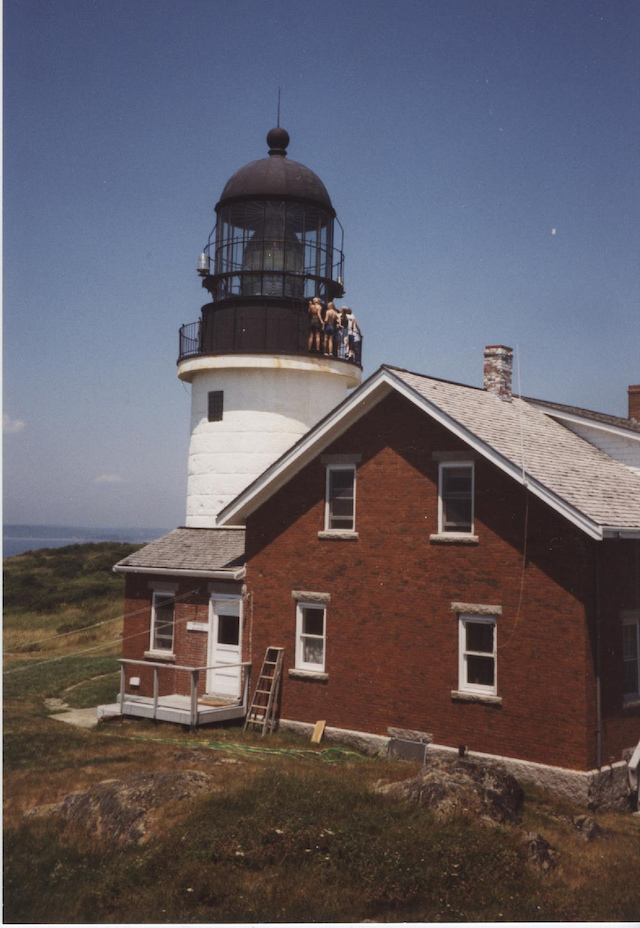 While the lighthouse keeper’s wife might be the most famous spirit on Seguin Island, she’s not the only one. The ghost of a young girl who died while living in the lighthouse is said to haunt the grounds. Many believe her body is buried somewhere close to the property, and she’s been witnessed by many running playfully around the gardens, laughing, smiling, and sometimes coughing as if she has an illness. She’s not only been witnessed by visitors to the Seguin Island, but by previous keepers who’ve called the lighthouse their home.

One of the most famous instances of paranormal activity on Sequin Island occurred when the lighthouse was being decommissioned in 1985. A warrant officer, who had made the journey out to the island in order to pack up the remaining furniture, decided to spend the night before making the trek home in the morning. During the night, he was awoken by a man dressed in oil skins, shaking his head violently. Before disappearing, the spirit managed to speak. The warrant officer shrugged off the visitation as a dream, and rather than listen to the phantom’s plea, he spent the following day clearing the Seguin Lighthouse of it’s remaining furniture, loading it onto a boat destined for the mainland. The boat mysteriously sunk while being lowered into the water, furniture and all. If a ghost pleads with you, you should probably listen.

During their investigation of Seguin Island, Maine-based paranormal investigation team Haunt M.E. made contact with many of the spirits still lingering on the island. Not only did the team experience manifestations of phantom sounds, suffer mysterious physical afflictions, and witness the famous piano notes drift from the lighthouse, at one point during their stay on the island, team member Ty Gowen was touched by a pair of unseen hands which tugged on the back of his jacket.

Seguin Island a wonderfully-preserved piece of New England history, but for those of us who are on quest for the other side its a perfect location for a paranormal investigation. Thanks to all the isolation, evidence is far less contaminated, and it doesn’t hurt that the ghosts don’t seem to be very shy

If you’re thinking about taking your paranormal investigations to the next terrifying level, Maine’s haunted Seguin Island might be just the thing. Would you spend the night stranded on Seguin Island? We want to hear from you! Tweet us @WeirdHQ, drop us a line on Facebook, or start a conversation in the comments below!