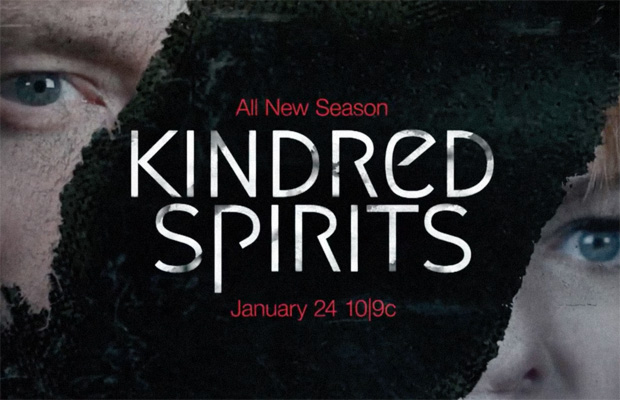 Travel Channel has announced that Kindred Spirits, the fan-favorite series starring ghost hunters Amy Bruni & Adam Berry, is returning for a third season of paranormal investigations, and this time, they’re facing some of America’s most infamous haunted locations, and they’re bringing backup.

After two seasons of some of the best paranormal television in years (seriously, read our thoughts here), fans of Kindred Spirits had come to love the show’s emotional take on ghost hunting, which focused on tackling cases involving families of the haunted. Adam Berry and Amy Bruni’s gentle approach to paranormal investigation resulted in a series that was as heartwarming as it was spooky, so it’s no surprise that it was one of the highest rated shows on Destination America before moving to TLC in 2017.

Now, Kindred Spirits has a brand new home and returns in January for its biggest season yet. This time, they’re expanding their mission to give a voice to restless spirits with ten episodes, a rotating case of special guest stars, and some of the most intriguing paranormal investigations of all time. “With its broader locations and terrifying tales, the new season of Kindred Spirits is right at home on Travel Channel,” said Jane Latman, general manager of Travel Channel. “Amy and Adam have built a strong trust with their fans who can’t get enough of their unique perspective of helping the haunted by reconstructing the faded stories of the dead — their investigations bring peace to the living and give a voice to the afterlife.”

In Kindred Spirits, investigators Amy Bruni and Adam Berry – who also executive produce – help families afflicted by haunted homes, but in season three, they’ll also be lending their hands-on research style to some of America’s darkest locations. Their multi-layered investigations dig into the past in order to identify the dead, while making use of an arsenal of cutting-edge paranormal investigation tools to give voices to the restless spirits.

With bigger cases to investigate in season three, and higher stakes than ever, Bruni and Berry have called in a small team of the top paranormal investigators in the field to assist in their mission to help the haunted. Special guests this season include hedgewitch and tarot expert Dana Newkirk, haunted object specialist Greg Newkirk, renowned paranormal researcher John E.L. Tenney, and psychic Chip Coffey. “What’s great about the show is that there’s a resolution,” Amy Bruni told us in an exclusive interview. “We take people through the entire case from start to finish. We try and turn it into more of a case study by investigating over and over again, doing really heavy research, and then at the end we don’t just walk away and say, “yep your house is haunted – see ya!” We tell them how to deal with it, and I think thats an important element that has been missing from ghost hunting for a long time.”

Set your DVR, because Kindred Spirits comes to Travel Channel for its third season on January 24th at 10PM EST, with new episodes premiering every Thursday night at the same time.

Check out the official trailer below: