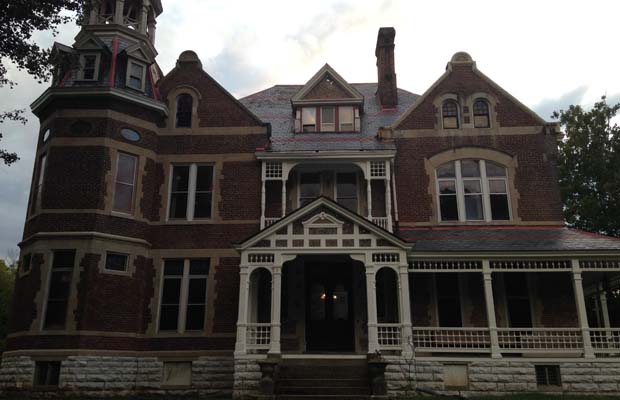 Whether for the ghosts, the history, or the architecture, it’s hard not to love big, abandoned mansions, but when it comes to combining the three, Lawrenceburg, Kentucky’s T.B. Ripy house takes things to a whole different level. Not only is the massive manor house abandoned, it’s haunted by a handful oh ghosts, including one who might even be the founder of Wild Turkey Bourbon. Week In Weird had the chance to visit the Ripy House for a private tour of the grounds and property, and let me tell you, it’s like walking into a real episode of Scooby-Doo. The incredible estate was built in 1888 by Wild Turkey tycoon Thomas B. Ripy, who had recently inherited the family bourbon business. Thomas proved himself to be a savvy business man, and when he died in 1902, he left the mansion to his 10 children and wife. For awhile, life was good for the wealthy Ripys, but then Prohibition put the breaks on the sale of booze and, consequently, the family cashflow. The Ripy family wasn’t going to let a silly little thing like a federal law get in the way of their legacy, and set out to combat the new law by having their mansion Scooby Doo-afied. Over the course of several months, the Ripy’s paid contractors on the sly to construct secret compartments, trap doors, hidden staircases to secret rooms, and a massive labyrinth-like basement,  which proved to be perfect for hiding a few hundred barrels of Kentucky Wild Turkey. Many of these secret booze hideaways are still located in the house today, and some local historians believe that more have yet to be discovered, possibly in the damp, dark basement straight out of a horror movie. Immediately after the end of Prohibition, the Ripy family resumed work at their distilleries (legally, anyway), and continued to produce bourbon in Lawrencebeurg until 1952, when the Ripys were bought out by the Gould Brothers. Shortly thereafter, the family sold the Ripy House, and by the mid-1960s, it had a new tenant, one who made Miss Havisham look like a social butterfly.

The new occupant of the T.B. Ripy House had the whole place buttoned up, aside from one floor which she lived on, which still bares the marks of an extremely eccentric old lady to this day. That particular part of the house is covered in animal print, has the bathrooms painted gold, and rooms wallpapered with bright, mismatched colors. By 2010, the house, which had not had any repairs performed in years, was worse for wear, and the Ripy family descendants re-purchased the mansion and began to restore it back to its former splendor. While the house is currently in the process of being preserved, it’s been officially added to the National Register of Historic Places, and is still a gorgeous, and fascinating, piece of architecture. As you explore the T.B. Ripy House, strange features begin to pop out at you, like ornate Greek Mythology carvings over the mantles, stained-glass windows with cryptic messages about planetary and celestial maps, and a keen eye will spot compasses etched into the wood landings at the bottom of many of the building’s  staircases, a detail that has yet to be deciphered.

And then there are the ghosts. For decades, there have been rumors about the strange bumps in the night behind the walls of the T. B. Ripy House. The most common unexplained phenomena, reported by residents and visitors alike, are hearing the sounds of voices emanating from floors of the mansion that are completely empty. In fact, this very phenomena occurred while we were exploring the servant’s quarters in the attic, even though the rest of the house was completely empty. Doors open and close on their own, dark figures are seen darting down the halls, and the sounds of heavy boots stomping up and down the massive main staircase have been recorded on numerous occasions. Even full-body apparitions have been spotting by by visitors to the T.B. Ripy House, but when pursued, the figures, seem to disappear into thin air. There’s something strange happening inside this real-life Scooby-Doo mansion, that’s for sure.

Fortunately for paranormal enthusiasts like us, the incredible T.B. Ripy House is open to overnight ghost hunts, and during the fall season, you can even take the Lawrenceburg Ghost Walk, an event which recounts the spookier side of Lawrenceburg, Kentucky history, and ends with an investigation of the building.

Paranormal investigator and Lawrenceburg Ghost Walk founder, Jeff Waldridge, has spent countless hours inside the mansion, both on the job and off, and says the T.B. Ripy House has turned skeptics into believers.

“Guests [on the Lawrenceburg Ghost Walk] see something special at the T.B. Ripy House, which is why we save it for last,” Jeff told me. “We put them in the hot spots where we have captured paranormal evidence, and they actually get to witness ghost voices – EVPs – being captured in real time. Many of them have captured pictures of apparitions as well.”

For amateur ghost hunters, seasoned paranormal investigators, and even curious folks looking for a peek into the other side, the T.B. Ripy House is like a supernatural dream come true. As you explore the old halls, of the Bourbon Baron’s mysterious mansion, it’s hard to not to feel like you’re being watched by unseen eyes, and that’s probably because there’s a very good chance you are. Would you spend the night inside the haunted T.B. Ripy House? Tweet us @WeirdHQ, drop us a line on Facebook, and let us know if you could hack it!