Home / Eyewitness Reports / Witness Report: “I Held the Cursed Idol of Nightmares and Was in a Terrible Car Accident”

Witness Report: “I Held the Cursed Idol of Nightmares and Was in a Terrible Car Accident” 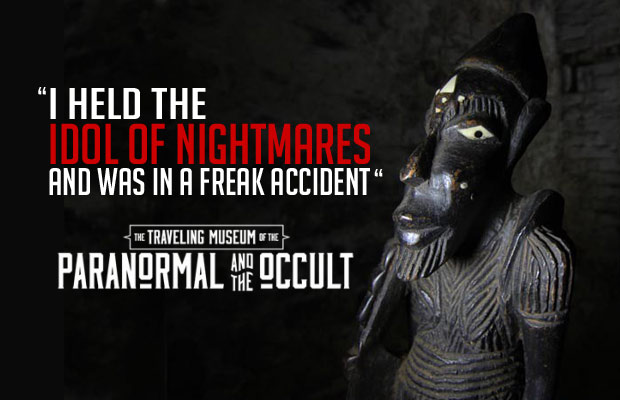 Discovered bound in burlap and hidden in a crawlspace below a home in Ohio, The Idol of Nightmares is one of the most fascinating, frightening, and paranormally-active haunted objects that we’ve ever come into contact with. But is The Idol dangerous? After a man who held the artifact suffered a horrible freak accident, he got in touch to share his terrifying experience.

Thanks to its tendency to surprise even staunch skeptics with its strange activity, The Idol of Nightmares has easily become the most popular item in the Traveling Museum of the Paranormal & Occult, even earning the affectionate nickname “Billy” from guests. Many who work up the courage to hold the artifact will report intense nightmares that feature the statue front and center, but the most incredible thing about The Idol of Nightmares is how the figure’s unmistakable, gruff voice comes through almost every EVP session we perform with it, without fail. A portion of our experiments with The Idol of Nightmares happen in front of large crowds in some of the world’s most haunted places, and if you know much about haunted objects, you know nearly all of them have a bad case of stage fright. Not The Idol. He rants and screams on recorders for audiences of two or two hundred. He’s even done it for Nick Groff, who has taken hundreds of thousands of EVP recordings during his years on Ghost Adventures, Paranormal Lockdown, and Ghosts of Shepherdstown. He’s never heard anything like it.

The following video, filmed by a guest on the Nick Groff Tour’s stop at the Ohio State Reformatory (where we’ve captured some fairly incredible evidence in the past), gives you a good idea of what you can expect from The Idol of Nightmares. The ten minute clip actually captures one of the first live, public experiments we conducted with the artifact, including some priceless reactions from Paranormal Lockdown‘s Katrina Weidman, paranormal investigator Jeff Waldridge, and a room full of ghost hunters.

Interesting to note: a later video by the same guest documents a bizarre recording error that kills the audio during the evening’s most intense group experiment with The Idol of Nightmares.

Sometimes, though, a guest has an experience with The Idol of Nightmares that goes beyond a bad dream or an EVP recording. Far beyond.

The following email comes from a man who held The Idol at a stop on the Nick Groff Tour, and subsequently experienced a terrible car accident. But he wonders – did The Idol of Nightmares cause the accident, or did it save him from it?

[Redacted] said he was talking with you about my story on your live feed last night and you wanted me to tell you about it first-hand.

I was at Ashmore Estates, on the Nick Groff Tour, where I held Billy. Three days after the event, I was driving in North Central Wisconsin when all of a sudden, for no reason, I started to think about holding Billy the Idol. In that moment a semi truck and trailer came over into my lane. I had to take massive aversive action or become nothing more than a memory for my family friends.

I had no choice but to take my truck off road or suffer a head on collision. I went down into the ditch at 65MPH and totaled my vehicle. The semi didn’t even stop! For whatever reason, I recall thinking of Billy again as I laid in the ditch in my truck.

Thankfully I walked away without a scratch.

So is it really bad luck or could be good luck? Something to think about, Greg. Despite the nightmares, creepy history, and the gruff voice that comes through on recorders, we’ve never gotten the impression that The Idol of Nightmares was malevolent so much as misunderstood, but then again, we’ve never received a report like this one either.

If you’ve ever wondered why visitors to the Traveling Museum of the Paranormal & Occult need to sign a waiver before handling the haunted objects on display, this is why.

Have you held The Idol of Nightmares? Would you? We want to hear from you! Tweet us @WeirdHQ, drop us a line on Facebook, or start a conversation in the comments below!