Bigfoot Hunters Pass Off Human Corpse as a Sasquatch Body

Home / Strange Phenomena / Strange Creatures / Found Him! Watch in Horror as Bigfoot Hunters Pass Off a Human Corpse as a Sasquatch Body

Found Him! Watch in Horror as Bigfoot Hunters Pass Off a Human Corpse as a Sasquatch Body 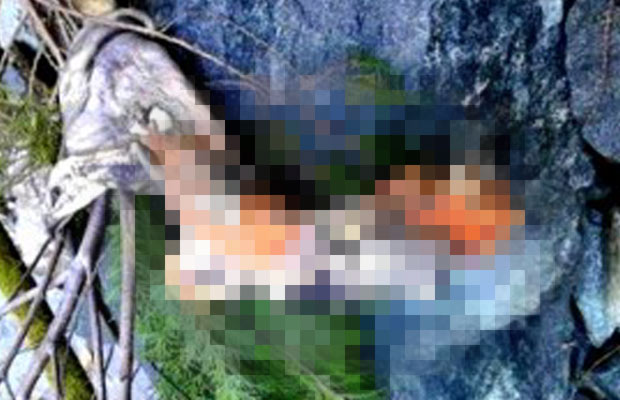 Now listen, I’m the kind of guy who, when given a fair choice, wants to believe the paranormal answer to a question over the logical one. I like living in a world where the skeptics don’t have all the answers, and because of that, I’ve been labeled everything from a mystery monger to a blind believer. But every once in awhile I’ll stumble onto a story with such a blatantly obvious answer that even my will to believe can’t overcome it.

Today, I found one of those stories, and it was one of the most surreal experiences I’ve ever had on social media.

Before I continue, I should warn you that the images you’re about to see are fairly graphic, and kind of gross. So, you know, don’t go eating an Arby’s melt while you read this, ok?

While browsing through my Facebook feed this morning (feel free to friend request me), a post in a private group that I belong to caught my eye and made me scroll back. I won’t name the group (as surreal as this whole thing is, I don’t believe they deserve to be fodder for a skeptic assault), but they’re dedicated exclusively to the study and appreciation of Bigfoot, and have some pretty strict rules they abide by. One of those rules is no swearing, and it’s one that I promptly broke by typing, “holy shit…”

In a post titled “Possible Bigfoot Bones Found Near Grants Pass, Oregon”, a man claims to have stumbled upon the remains of a Sasquatch while on a hunting trip near the Illinois River.

I was contacted by a man in Oregon named Craig who had these pictures sent to his phone by his former brother in law  who was out hunting with a friend in Grants Pass along the Illinois river a few years back when the discovered these bones near the river.

The two hunters were amazed by the size of the feet and length of the leg bones. They thought at the time they might be a big human or maybe even bigfoot. They called the local game wardens who came up to the inspect the find. The hunters said that within a hour or so 2 black suburban pulled up and these men confiscated the bones and told everyone there they never saw this “It didn’t Happen” Just for get about it. They also confiscated their cell phones but didn’t know they had already sent the pictures to Craig and other family members.

It’s a pretty lofty claim, and one we’ve heard a half a dozen times before, but these photos were different. Mainly because the so-called Bigfoot leg was wearing a sock. These guys had found a dead dude. At least that’s what it looked like to me. It appeared so obvious to me that they had found a corpse that I was having a really hard time believing that this story had not only been posted to two separate blogs (if not more), but that no one had even approached the idea that this might not be a Bigfoot.

In case you doubt me, and in the interest of presenting the whole story, here’s the images that were attached to the post. Eat lunch at your own risk.

IT GETS GROSS BELOW THIS LINE

YOU ASKED FOR IT! 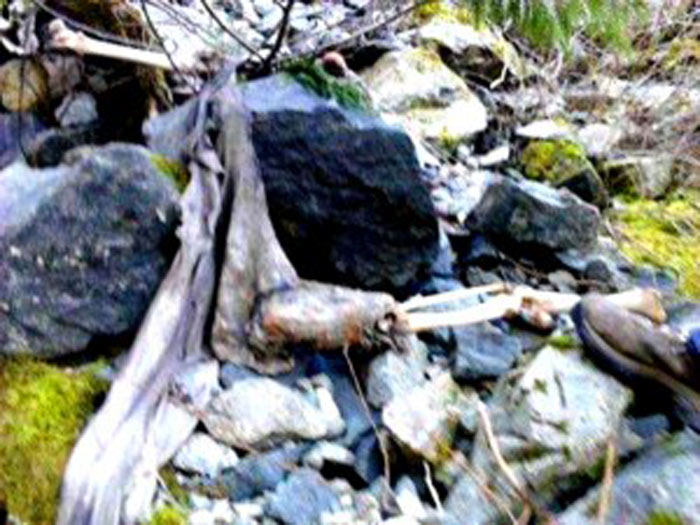 “Bigfoot” is wearing a sock?

See what I mean? From what looks to be a lone tube sock to the what appears to be the tattered remains of pants draped along the exposed leg bones, there’s very little doubt in my mind that we’re looking at a dead guy. Maybe a bear, if he just ate someone. The Bigfoot hunters, though? They couldn’t be convinced. At least Shane was with me.

As I did a bit of digging, I found that the story was actually a bit over a year old, and never appeared to get much press at the time, which is surprising considering the claims. Then again, it took a couple years for the Roswell Slides people to turn a dead kid into an money-making extraterrestrial sideshow, so we might still see a press conference about hobo bones later this year.

Here comes Beth, positing that it might be a bear. Sure, maybe that will be easier for the Bigfoot hunters to swallow. It’s gotta be, right? Nope! They pretty much ignored me, but Beth? Screw her. Why is she even there?!

Watching Sasquatch hunters pass off a badly decayed human corpse (pooooossibly a bear that just ate someone) as a Bigfoot body is even a bit too much of a stretch for me, and that’s coming from someone who believes Bigfoot is a ghost.

So what do you think? Did these hunters find a human corpse in the Oregon forest, or did Bigfoot suddenly start wearing tube socks and Dickies? Have you seen a paranormal claim that you just couldn’t wrap your head around? We want to hear from you! Share your thoughts with us on Facebook, tweet us @WeirdHQ, or get a conversation started in the comments below!