Home / Ghosts & Hauntings / Fire and Loss: Investigating the history of Gore Orphanage and Its Legends 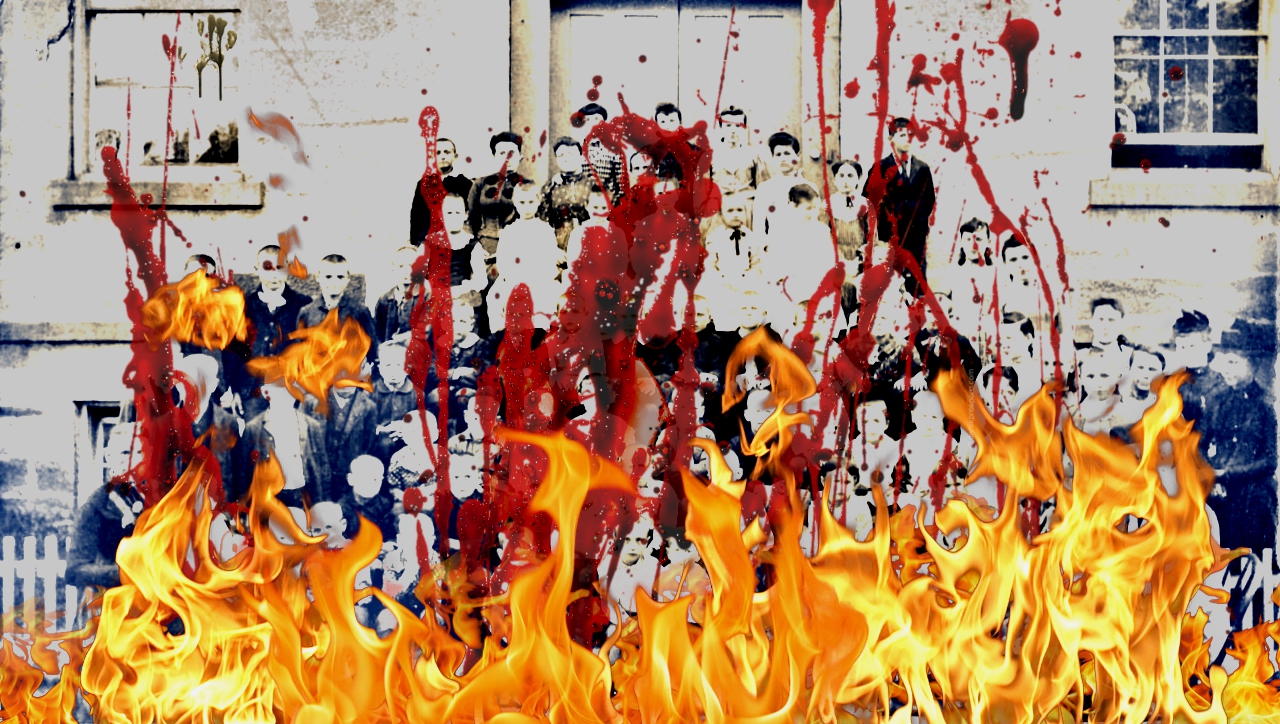 Northeastern Ohio teenagers have been creeped out for generations by the story of Gore Orphanage. A ruined stone foundation in Lorain County bears the marks of countless trespassers, wannabe Satanists, and ghost hunters searching for child spirits and telling creepy campfire tales. Now, it’s the subject of a low-budget horror flick due out in October 2015.

You wouldn’t necessarily know it from the trailer, but Gore Orphanage is billed as a horror movie. Instead of being a gore-filled scarefest, it’s more of a creepy “period piece” set in 1934 according to Executive Director Cody Knotts. The storyline follows a young orphan girl living at Gore Orphanage, her interactions with the other children, and a cast of dysfunctional employees.

Growing up in northeast Ohio, I first became aware of the legend after reading Haunted Ohio by Chris Woodyard. A prolific writer of Ohio ghost stories, Woodyard did more than just recite the rumors; she shed light on the true story behind the place. What most people know as Gore Orphanage is a twisting confusion of the truth, and some of its most interesting aspects are left out entirely.

To begin, you must know that Gore Orphanage never existed.

Gore Orphanage Road, originally called Gore Road, has nothing to do with horror and everything to do with surveying. A gore is a wedge-shaped piece of land inserted into a map to correct a surveyor’s error. Disappointing, I know. The Light and Hope Orphanage, however, did exist on this road beginning in 1903. It was one of several by that name built by Reverend John Abraham Sprunger, a Mennonite missionary and evangelist from Switzerland. The reverend and his wife/cousin Katharina lost all three of their own children in infancy which spurred their quest to care for other young unfortunate souls. Unfortunately, Reverend Sprunger believed in faith healing, which did little to improve the health and poor condition of its children. Excessively cruel punishment, malnutrition, and unsanitary conditions caused many children to run away to nearby farms for safety. Sprunger died there of a stroke on September 28, 1911; the orphanage soon fell into bankruptcy and closed in 1916, leaving the farm and four buildings abandoned. Traces of the ruins can still be found today just west of the ‘Cry Baby Bridge’ (one of Ohio’s many) on Gore Orphanage Road. The Reverend John A. and Katharina Sprunger. (Max Haines)

The overgrown foundation explored by thrillseekers hunting for Gore Orphanage was actually a mansion built in 1840 by a prosperous Massachusetts farmer named Joseph Swift. Swift named his home Rosedale, but locals referred to it as “Swift’s Folly” after the farmer made a series of disastrous financial investments in railroads. Rosedale was sold to the Wilber family in 1865 after Swift became penniless. Nicholas Wilber and his wife Eliza had a son named Miller; together with his wife Henrietta, they had four children.

Now, here is where things getting really weird.

Miller’s father Nicholas was known locally to have been a Spiritualist (not to be confused with Satanist *cough*). It was rumored that one room of the fourteen room Swift Mansion was devoted entirely to holding séances. Miller and Henrietta moved to a farm in nearby Berlin Heights. There, all four children died between January 13 and 19 of 1893, during a Black ( or “Milk-Borne“) Diphtheria outbreak. If you believe the local stories, Eliza had a nervous breakdown from the sudden loss of her four grandchildren. Not only did the family allegedly hold séances to contact them, but Eliza began a nightly ritual which attracted the attention of curious locals. She would set meals on the table for her deceased grandchildren, and every night call out, “Time for bed, children, come on!” before tucking the spectral children into bed. Rosedale, built by Joseph Swift, after its abandonment in 1901. (HABS/LOC)

Eliza passed away on November 10, 1899. Nicholas died on February 26, 1901, at which time the mansion was abandoned and left derelict. The Light and Hope Orphanage did not occupy the mansion, but it owned the property and surrounding fields. The real orphanage was built closer to the intersection with Sperry Road. But as soon as the mansion was abandoned, it became known as the local “haunted house” where teenagers would dare each other to enter after dark. This lasted until December 1923 when–either by vandalism or vagrant trying to keep warm–Rosedale burned to the ground. The story, published on December 8, 1923 in Elyria’s Chronicle-Telegram, says it all:

“Only two spectral stone chimneys now stand on the site of the old haunted house that has been a mystery at Mill Hollow for many years. The colonial mansion burned to the ground in a midnight blaze.

Neighbors, who heard mysterious noise around the place on stormy nights, swear that spirits were screaming in the trees at the height of the blaze.

How the fire started is a mystery…

The haunted house was the mecca for thousands of tourists. Names of visitors from all quarters of the globe adorned the dilapidated walls of the house.”

Local teenagers were combining the stories together as early as 1908. The tale of the four children dying from illness became attached to Rosedale. Their graves were whispered to be found along the river. From that time on, Swift’s mansion was known as a place haunted by ghostly children. Matters became worse when on March 4, 1908, the Collinwood school fire claimed the lives of 169 children and staff. The twisting of this true tragedy became retold as the burning of Gore Orphanage killing countless children. In reality, aside from the deaths of Reverend John Sprunger, Nicholas and Eliza Wilber and two of their children (Tryphenia in 1831 and Heman in 1841, aged 5 and 24 respectively, buried at a tiny cemetery south of Swift’s Hollow) prior to construction of the mansion, there were no other deaths on the grounds. (Whether or not any children from the orphanage died of disease is unknown; its records have been lost.) Crowds gathered around the smoldering shell of the school in Collinwood in 1908. (CSU)

But does this mean there are no spirits lurking near Gore Orphanage Road? That’s a matter of some debate.

Perhaps the Wilbers stirred something up with their Spiritualist séances, because strange things happen around the ruins of Rosedale. Visitors wandering through the woods in search of the fictional orphanage report finding children’s handprints on their vehicles when they return, and ghostly mists are reported near the old house foundation. I have personally visited the site several times early in my ghosthunting career with various other people. I’ve seen questionable handprints on cars, but one incident in particular has left me questioning my eyes for several years.

Around 2004 (give or take a year), I explored Gore Orphanage Road with a now-defunct paranormal group consisting of about a dozen people. Inside the old foundation, a makeshift fire pit spray painted with poorly-executed pentagrams (connect your corners, amateurs) had been set up by some curious trespassers before, and I chose that place to sit and for once, just observe without worrying about audio recordings or cameras. I let my eyes focus to the darkness, trying my best to avoid the wandering gang pointing their flashlights everywhere and the extra-chatty person sitting beside me. I could see something in the dark woods due north of my location along the path leading back to the vehicles. The more I focused, the more it appeared to be a greenish faint fog, like a miniature tornado perhaps 3 or 4 feet high and a foot or two across, drifting and wobbling in the trees. As I watched, two more faintly appeared nearby. But every time the annoying person next to me started babbling, they would get more distant. An especially loud group member approached me to brag about some “amazing” orb photos, and at that time I lost sight of the phenomena. To this day, I’m not sure if it was some trick of the eye or something as-yet unexplained.

What, if anything, lurks among the trees along Gore Orphanage Road? And What about this place has continued to lure curious people for over a century? Is it the creepy dead children, the creatively crafted urban legend, or can we simply not resist the temptation of scaring ourselves in a dark, deserted hollow?

Related ItemsFeaturesfilmsGore OrphanageHaunted OhioHope and Light OrphanagehorrorJohn SprungerJoseph SwiftnewsflashOhioRosedaleSpiritualismurban legendsVermilion
← Previous Story Life After Death? How My Sister Left Me a Sign From Beyond The Grave
Next Story → Want to live in the haunted S.K. Pierce Mansion? Now’s your chance!