Has it always been your dream to live in a haunted house? Well, if you’ve got 300 thousand bucks in your rainy day fund your dream might just become a reality.

Earlier this week the infamous S.K. Pierce Mansion in Gardner, MA went up for sale and has been peaking the interest of quite a few potential buyers. The gigantic Victorian was built in 1875 by famed furniture maker S.K. Pierce. Unfortunately for Pierce, the house on Broadway Street turned quickly from a dream into a nightmare.

Shortly after moving in his wife died suddenly from a bacterial disease, and though Pierce would go on to remarry, the loss of his first wife was an unforgettable.

Over the years the house has belonged to various members of the Pierce family, until their son Frank lost the entire estate in a card game during the 1900s. Way to go, Frank. After that, the house became the center of various lurid stories of brothels, murder, and drownings, all of which only helps to add to the recent rumors of ghostly encounters.

According to the current owners, Edwin and Lillian Gonzalez, the house is alive with the sprits of the people who lived and (in some cases) died on the property.

The tales of paranormal activity include everything from shadowy figures, ornaments that move on their own, footsteps, and even potted plants that seem to tip over by unseen hands. But that’s just the beginning…

According to Gonzalez he witnessed one of the sprits himself…

“I saw a man appear in the nursery, in broad daylight, in what was my office,” Gonzalez explained. “When I looked, this man, with jet black eyes, looked at me in this pasty white color. I didn’t expect it; I started shaking.” 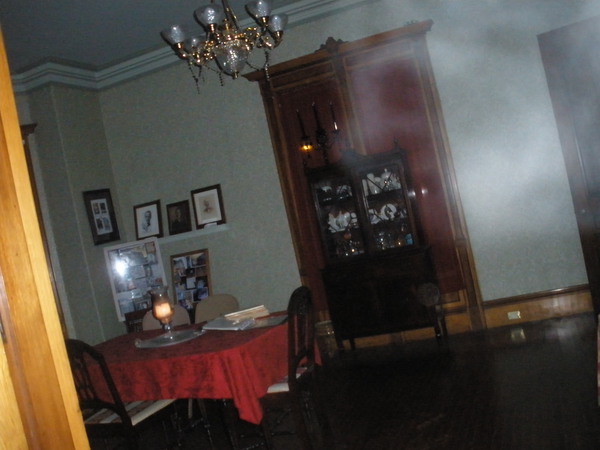 Even the neighbors tell stories of having had run-ins with the ghosts of children who lived and died at the house during their short lives.

I know that if I was looking to live out the rest of my days in a creepy old Victorian mansion filled with ghosts, this one would probably be at the top of my list! If you’re thinking about buying the house, better act quick because chances are it’ll be snatched up anytime within the next few days.