If you ever find yourself in Aberdeen, Washington, craving a bite to eat, you can find some great pub grub at Billy’s on the corner of East Heron and South G Streets. There you’ll find yourself surrounded by nostalgia from Aberdeen’s past. The town was built on the shipping and logging industry; it was a land of rough and rugged men. Though the Pacific Northwest is known for its milder, wet climate, a different sort of northern clipper found its way south to Aberdeen in 1902 to chill the citizens to the bone. Its name was William Gohl.

After a failed attempt at making a living as a bartender in the Yukon, and some time spent in San Francisco’s wharves, William “Billy” Gohl found his way south to Grays Harbor and settled in the small coastal sailing and logging community of Aberdeen. He was a cold looking brute standing 6 feet 2 inches tall and built like a Bulldog. Little did the townsfolk know that in the wake of his departure, Gohl was suspected in some peculiar deaths up north; many dead bodies of migrant workers washed up on the shore near where he was tending bar. But in Aberdeen, Gohl used his position as an official agent of the Sailor’s Union of the Pacific (SUP) to start a new career path. William Gohl (center, left of saw) at a logbucking competition in Aberdeen around 1907. (WSU)

Ever since Gohl assumed his position as Sailor’s Union agent on July 13, 1903, it was obvious that the German was not a man to contend with. He was known for igniting strikes and labor uprisings while ferreting out non-union sailors and running them off. On June 2, 1906, the schooner Fearless and its non-union crew moored in the harbor. Gohl arrived with a gang of armed toughs that night and fired his Colt at the captain. The hour-long gunfight ended with one casualty: a crew member of the Fearless. his stunt landed him in jail, but the SUP soon bailed him out.

It was about a year later, though, that something strange seemed to be happening in Aberdeen. The number of “floaters” (or dead bodies found in the water) increased drastically around the Wishkah River and Grays Harbor with such intensity that the town started referring to them as the “Floater Fleet”. This also led to a new nickname for the town: The Port of Missing Men. No one realized that Gohl was behind it all. In his second floor SUP office, he would shoot sailors in the back and steal all their valuables before dumping their bodies down a trash chute which led to the Wishkah River below. Unofficial estimates claim that he may have disposed of as many as 130 men by these means. Yet none of these crimes were ever traced back to Gohl nor did they land him in prison. It was his hot temper and distrust of his criminal business associates that would end his killing career. Gohl’s cabin built on Indian Creek where many bodies were said to have been dumped. (WSU)

On December 21, 1909, Gohl told saloon owner Paddy McHugh that he and John Klingenberg were going to kill one of his other henchmen, John Hoffman, that very night. His other crony, Charles Hadberg, would also be dead before the 22nd. Four days later, Gohl swaggered cheerfully into the saloon. When asked about Hoffman and Hadberg, Gohl said, “They went away for good.” It was more than a month later that the body of Hadberg was found floating in the river near Hoquiam. Gohl was arrested on February 3, 1910. Klingenberg confessed to the police to try and save his own skin. He claimed that Gohl forced him to kill Hadberg, but Gohl himself killed Hoffman. Hoffman “cried like a child” and pleaded, “For God’s sake, don’t kill me, Billy! Don’t kill me!” before Gohl put his Colt to the mans head and pulled the trigger. “I guess now you’ll shut up,” Gohl said before he weighed Hoffman’s body down with an anchor and tossed him into the Chehalis River. The interior of an unknown saloon in Aberdeen around 1900. (WSU)

The sensational trial ended with a guilty verdict for Billy Gohl, then known as the “Ghoul of Grays Harbor”. This was only for two counts of murder, though he was suspected of an additional 41 deaths. Judge Sheeks sentenced Gohl on May 24, 1910 to two consecutive life terms. He was transferred to the Washington State Penitentiary in Walla Walla in June of 1910 where he became Inmate 5779. There, his mental state started to come unhinged. Some allege that he witnessed too many bloody attacks between prisoners there, but it’s far more likely that he began suffering from a form of dementia brought on by the syphilis he contracted several years earlier in the bawdy houses along the waterfront. He was admitted to the Sedro Woolley Mental Hospital, then transferred to the State Hospital at Medical Lake in Spokane in 1927. There he died of complications from syphilis, ““lobar pneumonia, erysipelas, and dementia paralytic” on March 3rd at age 53.

But not everyone thinks that’s the end of Billy’s story. Today at Billy’s Restaurant, many believe that Gohl and his victims still wander. Cold spots, flickering lights, and disembodied voices are commonplace throughout the building. At the bar, glasses have the strange habit of flying through the air and smashing against the opposite wall, leading some to believe it’s the work of Billy Gohl and his ill temper. At least one employee is convinced that Billy haunts the establishment, having seen a man resembling him sitting at the bar late one night staring at her intently before vanishing into thin air. Upstairs, there are said to be the ghosts of various prostitutes from the building’s past as well as sailors–some of whom were Gohl’s victims. 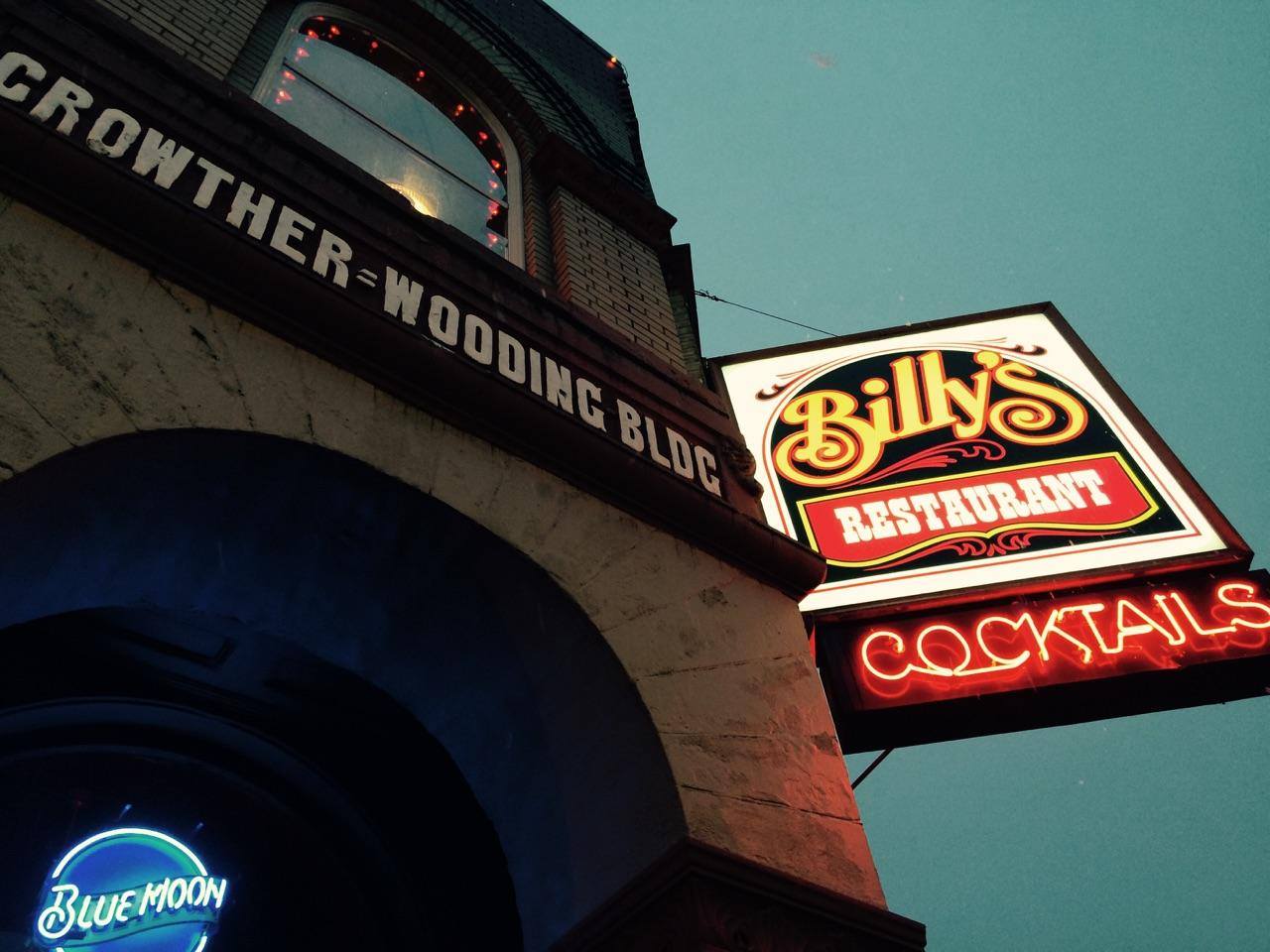 Today, Billy’s might serve more than one form of spirits.

Unfortunately, Billy’s was not the home of Gohl’s business career. The headquarters for SUP was located above the Pioneer Saloon, run by Paddy McHugh and Billy Montana, which sat on F Street near Heron Street and sat against the Wishkah River. That means Billy’s office was a full block east of Billy’s Restaurant. So what was at the site of Billy’s Restaurant? It was the Red Cross Pharmacy founded by Lovell Potter Dudley which was located in the Crowther-Wooding Building built in 1904. 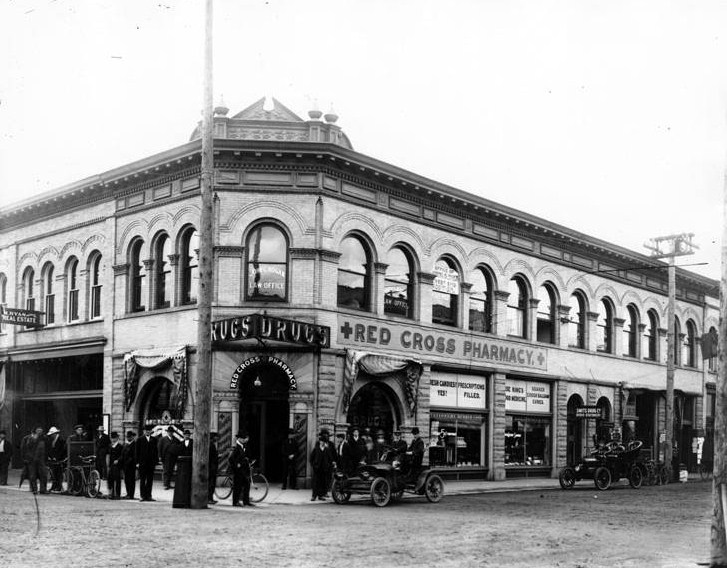 Heron Street from the direction of F Street as it looked in 1908 clearly shows the Crowther-Wooding Building (center) was predominantly occupied by a drug store. (WSU)

So who haunts Billy’s? Are the ghost just misidentified people who lived and worked in the building over the past century? Or, after the bawdy and dangerous skid row along the river was demolished, did Billy and his dead comrades jump ship and move down a block to nicer surroundings? While we many never know the answer, one thing is certain: Billy Gohl, one of the most infamous forgotten serial killers in US history, never worked there.

Related ItemsAberdeenBilly's RestaurantFeaturesGrays Harborhsuntingsmurderserial killertrue crimewashingtonWilliam Gohl
← Previous Story New York’s 1880 UFO inspired close encounter of the third kind
Next Story → Life After Death? How My Sister Left Me a Sign From Beyond The Grave