“VIRGINIA, your little friends are wrong. They have been affected by the skepticism of a skeptical age. They do not believe except they see. They think that nothing can be which is not comprehensible by their little minds. All minds, Virginia, whether they be men’s or children’s, are little. In this great universe of ours man is a mere insect, an ant, in his intellect, as compared with the boundless world about him, as measured by the intelligence capable of grasping the whole of truth and knowledge.”

It is once again that special time of year when shopping malls are full, our wallets are empty, and distant relatives make themselves at home. Children all over the world send prayers and letters to Santa Claus, a composite image of the Greek St. Nicholas (especially his Dutch form, sinterklass), the old Nordic Odin, and the creative vision of Haddon Sundblom, an artist working for the Coca-Cola company in 1931.

Of course, countless mythic and commercial interests had a hand in creating the image of Santa we cherish today. Sundblom himself turned to Clement Clark Moore’s 1822 poem “A Visit from St. Nicholas” (often called “‘Twas the Night before Christmas”) for inspiration. Moore describes Santa as a rotund and benevolent being:

“His eyes—how they twinkled! his dimples, how merry!

His droll little mouth was drawn up like a bow,

And the beard on his chin was as white as the snow;”

Those lines formed the basis for Haddon Sundblom’s paintings of Santa for Coca-Cola: fat, rosy-cheeked, red coat and hat, boots, white beard, and a sack of gifts for good girls and boys.[1] This is the image that many young people are encouraged to believe in today, and we reward the fervor of their belief with gifts that we tell them came from Santa Claus himself (as clearly evidenced by the missing cookies).

(Earlier this month, another Who Forted? contributor deftly explained some of the mythic, and possibly supernatural/fae characteristics of Santa Claus, with special attention given to Moore’s poem). 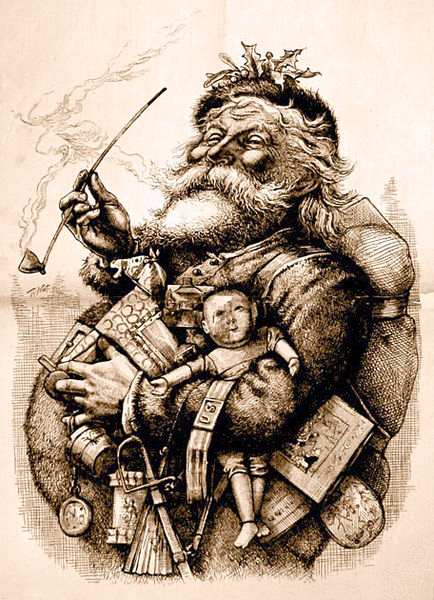 This is also the time of year when Stephen Wagner of paranormal.about.com starts to post some very interesting submissions: stories from individuals who claim to have encountered Santa Claus, but not on his break near the food court in their local mall. Stephen collects stories from people who have encountered the real Santa Claus. Stephen has been collecting and publishing these stories for a few years now, and he believes that many of his informants are well-intentioned in their submissions: for the most part, they aren’t messing with us. They do believe that they’ve seen the real Santa Claus, or at least something a lot like him, which they are at a loss to explain:

I had an experience when I was three years old and still young enough to wear footed pajamas. The year was maybe 1969, Christmas Eve. I wanted to see what Santa had brought me, so I quietly walked down the hallway and looked around the corner to our living room. I saw my parents and someone I didn’t know around our Christmas tree. The stranger was an old guy with a white beard and hair with a red suit. I quickly went back to my room as fast as I could with footed pajamas and slid into bed.

I told my mom what happened many years later and she insisted that I was dreaming or that it was my dad. That wasn’t possible because my dad was sitting in a chair behind the stranger and my mom was standing right next to my dad! I’m African American, and during that time the tenants in our building were all African American, so Santa stood out! -Joanne

An old friend came to see me a couple of weeks ago. We lost touch years ago, but he managed to trace me and he brought me a Christmas card. After a few minutes, I asked him if he remembered the Christmas Eve about 30 years ago when we were outside our houses. We grew up next to each other.

It must have been around 7.30 p.m., a clear night, when we suddenly heard a bell or bells in the distance getting closer real fast. As we both looked up, there was the reindeer, the sleigh and Santa flying very fast and low over my house. It was brief, but we both ran to tell our families. Of course, everyone laughed, but I tell you it was real!

So when my friend turned up I asked him if he remembered, and he said of course he did… but he didn’t like telling people about it now. You can imagine why! – Jimmy

You can check out the entire selection of Santa encounters here.

Even in a fairly skeptical 2012 article on Wagner’s Santa reports for the Boston Globe, London author Chris Wright was impressed by the serious tone of many of the accounts: “…the overall tone is of people giving courtroom testimony…Reading these accounts, you feel that these are people who are desperate to be taken seriously, and who see Wagner’s site as a chance to present their case.” [2]

(Mr. Wright’s article also included what might be one of the greatest quotes from any paranormal investigator in history: ‘The only possibility of this being real is if it’s an alien or a ghost pretending to be Santa.’ – Loyd Auerbach, Atlantic University. Anything is possible at Christmas, Loyd. And what’s with leaving out Bigfoot?) 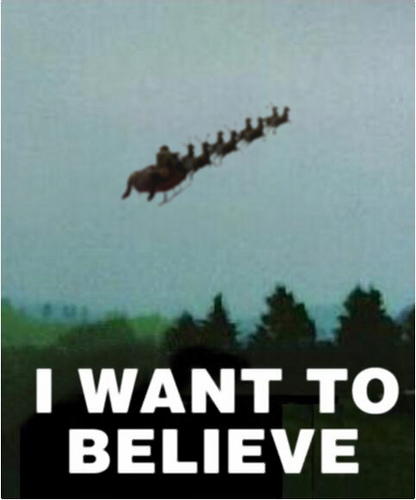 In his fortean classic The Mothman Prophecies, John Keel describes the home and work of a writer named Walter Gibson, a prolific novelist whose subject was a character named “the Shadow.” As Keel relates it, the Shadow was “fond of lurking in dark alleys and wearing a wide-brimmed hat.” Interestingly enough, an apparition matching the appearance and behavior of the Shadow now appears in Gibson’s former residence, the very place in which he dreamed of and wrote about the character so often. Keel suggested that this Shadow-like apparition might be a “tulpa”: a thought-projection, a being brought into existence by the concentrated mental energy of human belief. [3] Keel postulated that Gibson’s years of thinking about the Shadow in that space eventually  brought a Shadow-like apparition into existence there. He then went on to wonder whether some of the other apparitions people were seeing might be something like a tulpa.

Keel drew the idea of tulpas from the Belgian-French explorer Alexandra David-Neel’s 1929 book Magic and Mystery in Tibet, in which she describes their tendency to eventually develop their own agency, entirely separate from the pure will that generated them:

“Once the tulpa is endowed with enough vitality to be capable of playing the part of a real being, it tends to free itself from its maker’s control. This, say Tibetan occultists, happens nearly mechanically, just as the child, when his body is completed and able to live apart, leaves its mother’s womb.” [4]

Or as Santa leaves the North Pole?

Since Keel introduced us decades ago, forteans have fallen in love with the notion of the tulpa. Nick Redfern referenced the idea heavily in his book Three Men Seeking Monsters (in which the cryptozoologist Richard Freeman conjures a spider-tulpa in the basement of his home), and Chris Savia of The Anomalist once suggested in an article for Who Forted? that the belief in “Slender Man” among the denizens of the internet has granted the entity “form and agency as a tulpa. Just like the Jersey Devil.” [5] If one person thinking about the Shadow was enough to generate an apparition, could the believe of the world’s children generate a Santa-tulpa? Could this be the source of people’s Santa encounters? 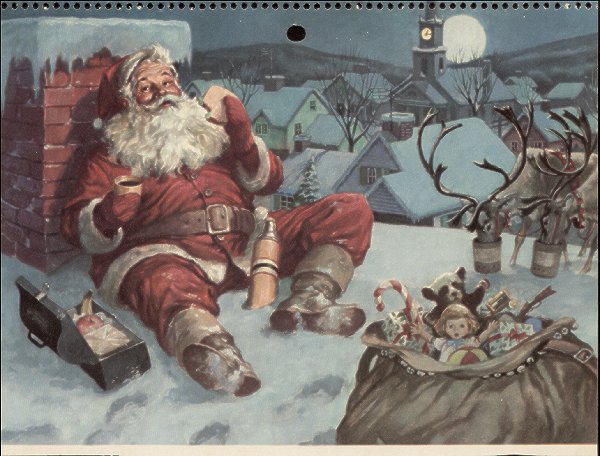 I can almost hear your stockings getting in a bunch. Do I really mean to suggest that Santa Claus is as really real as our thoughts, or as (now I’m looking at you, Loyd) “ghosts” and “aliens”? No, I am not writing this in an effort to prove that the collective powers of children’s minds have created a red-coated being who lives at the north pole, operates a high-flying sleigh, and keeps elves as slaves. I’d rather not even take a stand on the objective reality of any sort of tulpa. It is, however,  my intention to point out that if tulpas are indeed an appropriate explanation for the various fortean phenomena to which we might ascribe them, then we must be willing to consider the far-reaching implications of suggesting that the human mind has the ability to conjure thought-forms of any sort. If Walter Gibson’s mind was enough to create an apparition of his character, shouldn’t the imaginations of all the world’s children conjure the image of Haddon Sundblom’s Santa Claus? But why stop there—maybe this spring Stephen Wagner should solicit Easter Bunny reports. In fact, we would have strong ground on which to question the utility of describing certain apparitions as “tulpas” if no one ever claimed to encounter the real Santa, given that sincere belief in him is so widespread. The fact that many people seem to actually experience something like the real Santa Claus supports the tulpa-ish notion that there may be blurry lines between belief and experience, between place we describe as thought and the thing we agree to call reality.

As forteans, our supreme objective is the consideration of every available data-set. There is nothing Charles Fort detested more than the rejection or suppression of data that did not conform to existing paradigms of the time. And if there’s one batch of stories that does a poor job of conforming to today’s paradigms, it’s Stephen Wagner’s Santa-data.

The only indisputable fact to come out of all this is that a great many people have come forth with their stories of Santa encounters, and isn’t that the raw material of the fortean endeavor itself? Fantastic stories? The present writer, for one, celebrates the experiences of those who have been lucky enough to encounter that jolly old elf. I’d like wish you a holiday season as full of magic as these stories. 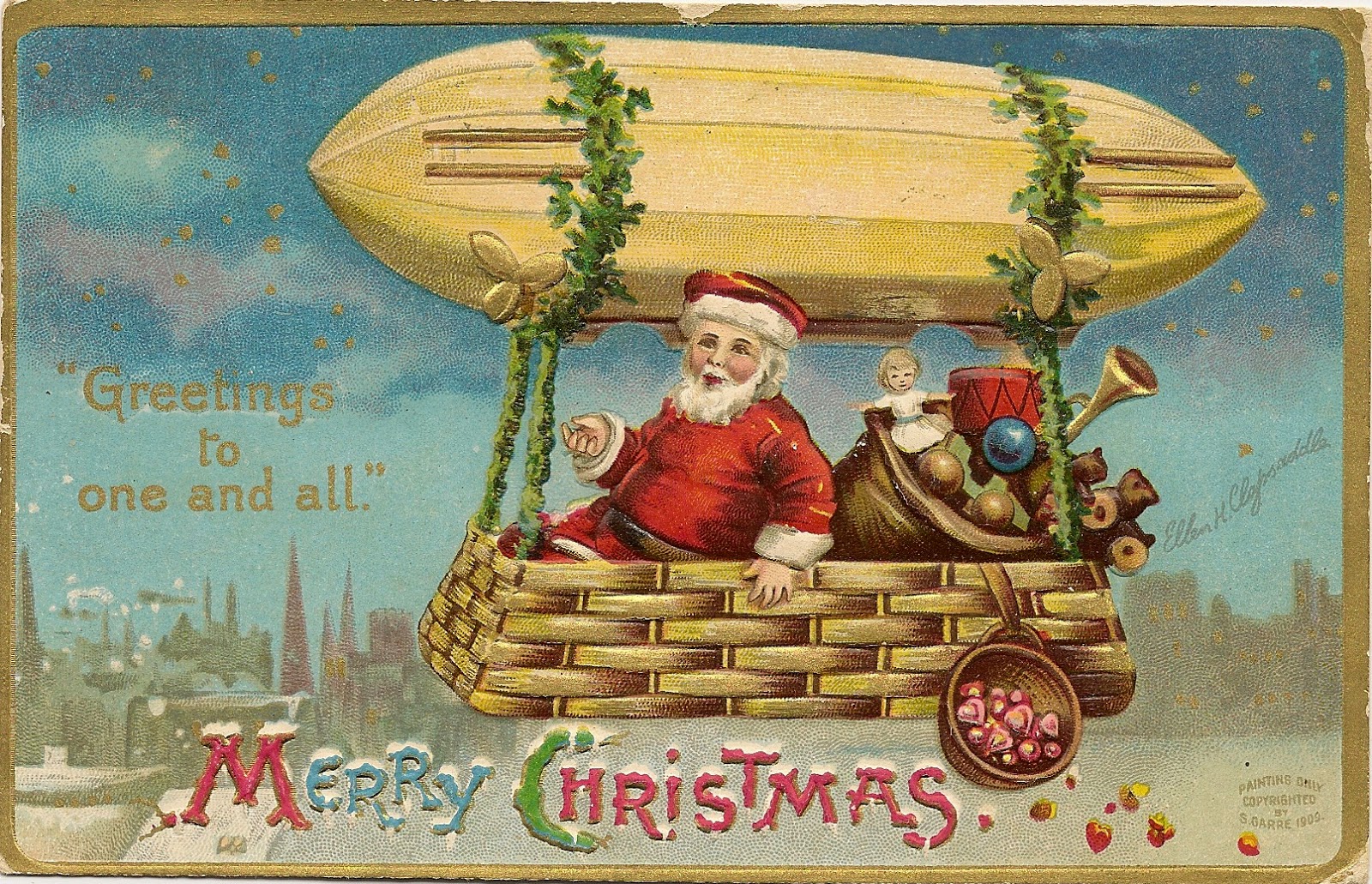