Home / Ghosts & Hauntings / Was a Ghostly Materialization Accidentally Discovered on an Old Roll of Film?

In a series of photos uploaded to the internet last week, a photographer who finally got around to developing an old roll of film claims he made a startling find: the last three photographs on the roll seemed to show the materialization of a robed figure.

“This really scary succesion of pictures came up on my roll of film when I developed it,” he told Reddit. “I hadn’t used the camera for a few months, and I realized that the film was done so i went to develop it. The gif im posting is the last three pictures that were on the roll. It kind of looks like a ghost wearing some sort of shawl.”

The photographer took the three photos and combined them into an animated .gif, which he says shows an even stranger aspect of the images that he can’t recall snapping – the fact that they’re in such a tight sequence.

“Whats weird is that the photos are in succession. I put them in a GIF and it looks like a video panning down from the top of the “ghost” to the bottom. The problem is that the camera needs to be forwarded before you take another picture. Its impossiple to accidentaly take two pictures in a row–let alone three.”

The image bears a lot of similarities to the vintage images of “ectoplasm” snapped during the height of the Spiritualist movement, though some viewers have pointed out that the supposed figure looks quite a bit like the Virgin Mary with her hands clasped to her head in prayer. Perhaps the photographer captured a miraculous manifestation rather than a ghostly one?

For those wishing to take a closer look at the photos, you can find the un-gif’d images below (click to enlarge). 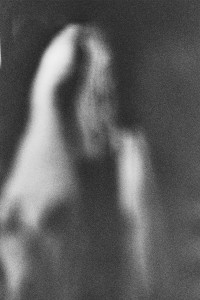 What do you make of the “materialization” captured on camera? Did the film capture the appearance of ghosts, miracles, or was it something more simple? Let us know what you think! Tweet us @WeirdHQ, message us on Facebook, or leave us your thoughts in the comments section below.