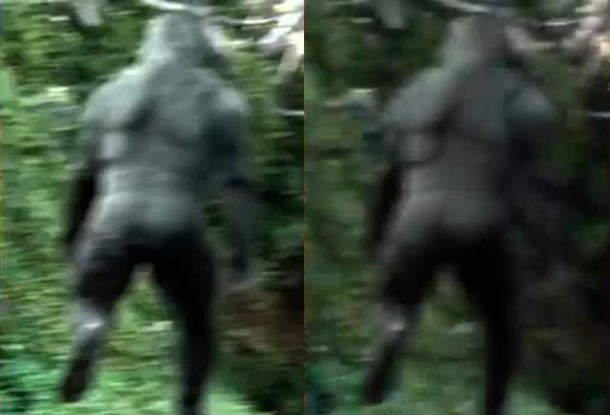 A new, blurry Sasquatch photo is circulating the internet this week, which normally wouldn’t be anything to get terribly excited about, except this one is actually pretty impressive.. if it’s real. Information on the photo is terribly slim, but the story is that it’s a scanned copy of a photo snapped on a 35mm camera a few years ago, and sent out to Bigfoot researchers where it has since spread like wildfire.

Right away, you can see that the qualify of the photograph is easily comparable to the infamous Patterson-Gimlin film, long considered the best ever evidence of North American Man-Apes. The hulking creature looks as if it’s in mid-stride, all of the body features are easily made out, and one of the most striking qualities of the image is ability to see the monster’s muscle definition. Squatch does squats, apparently.

Alas, as with all Bigfoot evidence, we might do well to take this one with a grain of salt. For one, the stance looks an awful lot like the lawn ornaments sold by SkyMall. Secondly, the creature almost appears to have “articulation joints”  like an action figure. Seriously, take a look at the crotch.. that’s an action figure package if I’ve ever seen one.

So what do you think? Is this photo a genuine snapshot of the big guy? Or was someone having some fun with their toys? I want to know what you think. Tweet me at @WeirdHQ, swing by the Facebook page, or leave a message in the comments below.