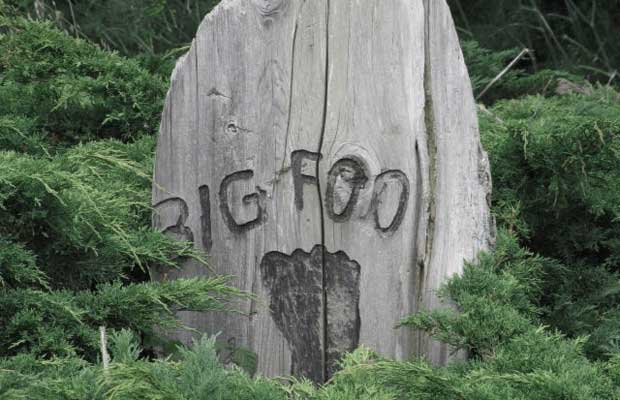 Exactly 35 years ago this week, Washington’s Mount St. Helens erupted, blowing nearly a cubic mile of ash and boulders as big as buildings into the atmosphere, causing over a billion dollars worth of destruction. It remains the most deadly and destructive volcanic activity in the history of the united states, claiming the lives of 57 people… and possibly one cryptozoological creature.

The massive eruption of Mt. St. Helens caused massive streams of mud and silt to come roaring through the forest at speeds of up to 70 mph, destroying anything in their paths. One of the unfortunate victims of the eruption was a brand new A-frame house. By the time the dust had settled, the owners returned to find the home filled with 200 tons of ash and mud. The half-buried home still sits where it did nearly four decades ago, now the main attraction at the North Fork Survivors Shop, a roadside curiosity completely dedicated to the 1980 explosion of Mount St. Helens. But while the A-frame might draw most of the attention, there is one piece of history on the property that’s a lot more interesting: Bigfoot’s grave. After the eruption, Sasquatch disappeared from the scene, leading many of the locals fearing that the disaster had killed their favorite local monster. After all, the Pacific Northwest has always been a hotbed of Bigfoot sightings, so it’s reasonable to think that the big hairy guy might have become a victim of the explosion. The North Fork Survivor’s Shop took it upon themselves to honor the untimely demise of the creature by erecting a gigantic sculpture of the beast, considered to be one of the largest Bigfoot statues in the world, and the only one marking his grave. Today, the gigantic grave marker is hard to miss as you travel the Spirit Lake Highway in Toutle, Washington. For years, travelers have been stopping by the strange monument to pay their respects to the big guy, some even laying flowers at his grave.

While it might be easy to make a joke about how the eruption doesn’t seem to have made a noticeable dent in the Sasquatch population, consider this: Finding Bigfoot has been looking for the monster for half a dozen seasons now… and they still ain’t found him. Better pay your respects just in case.

Do you think the Mount Saint Helens eruption could have killed Bigfoot? Have you ever been to the grave at the North Fork Survivors shop? We want to hear from you! Tweet us @WeirdHQ, drop us a line on Facebook, or leave join the conversation in the comments below.

Related ItemsBigfootbigfoot's gravedead Bigfootmount st helensmt st helensnorth fork survivors shopSasquatchwashington
← Previous Story The Haunted Shades of Death Road is the Most Terrifying Stretch of New Jersey, and That’s Saying Something
Next Story → Man discovers eerie photo of a UFO close encounter on his phone, only he has no memory of snapping it…