Spooky Video of Abandoned Mine Captures Ghost Voices on Camera, Other Creepy Activity YouTube is awash with blatantly fake videos of paranormal evidence as far as the eye can see, which is why when I stumbled across a set of videos entitled “The Horton Mine: Encountering a Ghost in a Haunted, Abandoned Mine” I let them sit in my bookmark folder for a week before actually sitting down to watch them. Boy, was I wrong.

The videos, which were shot over the course of a year, were filmed by the YouTube channel Exploring Abandoned Mines in CA, NV, and AZ. I should note that the camera man, known only as Frank, isn’t a ghost hunter, in fact, his channel has nothing to do with ghosts or the paranormal at all. He’s an urban explorer who sticks to poking around in underground tunnels and mines, documenting the past in the process. 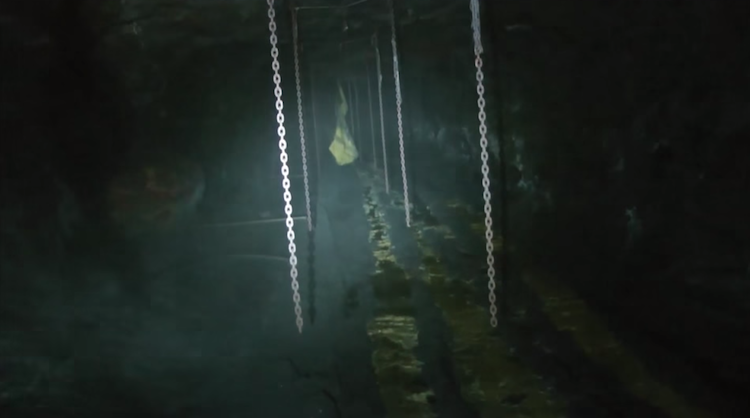 The tunnel in question is California’s Horton Mine, which was used in the late 70s as a transport tunnel to move ore from the nearby Victorine Mine. According to Frank, the mine has been abandoned for years, which is obviously one of the reasons it drew his attention in the first place. In the first video (below), which was shot in the summer of 2013, Frank makes his way down the tunnel, nearly making it to the end before something catches his attention. Hanging from the ceiling of the mine are countless chains, which at the time would have been used to help suspend the ventilation tubing. What’s strange is that only one of those 40 pound chains suddenly begins to swing, while the others remain untouched.

I won’t lie, if I was Frank I would have hit the bricks in an instant. There’s something about the consistency of the swaying that is so unbelievably off-putting. Watch the video and you be the judge:

If you thought that was creepy, just wait. The second video, which was shot one year later, is a hell of a lot more interesting. In this clip Frank finally makes it all the way to the back of the mine, and just as he begins to head back in the direction of the entrance, the mine shaft erupts with the strange sound of men talking. Obviously shocked, he panics and begins to make his way out of the mine, and just as quickly as it started, the strange sounds are gone. Skip ahead to 7:30 mark if you just want to hear the mysterious sounds.

There are a lot of theories floating around in the video comments section about what could have possibly made the sounds, from discarded walkie-talkies, to a radio signals, to the fringe “recorded stone” theory. One YouTuber believes he was able to make out what the strange voices are actually saying, and even stranger, he says the voices are speaking French. Here’s the translation:

Are you prepared to die?

you went too forward

Whatever conclusion you come to, I think we can all agree that the videos are undeniably creepy and definitely worth a watch. For added effect, I highly recommend waiting until you’re the only one awake at 1am and giving them a listen…

What do you think? Did the unnamed camera man capture the voices of miners from the other side? Watch the videos and leave your thoughts in the comment section below!

Related ItemsabandonedevidenceevpghostshauntedHorton MinemineMistparanormalurban explorationyoutube
← Previous Story In the Psychic Town of Lily Dale, New York, The Veil Between Life and Death is Especially Thin
Next Story → The Haunted Shades of Death Road is the Most Terrifying Stretch of New Jersey, and That’s Saying Something