John Zaffis, the Haunted Collector himself, is on the move. After searching long and hard for a suitable new home for his Museum of the Paranormal, he has found a fitting new location inside a former funeral parlor in the small town of Adams, Massachusetts. Even better, the large vacant building had a list price of only $79,000. On March 23, the Planning Board finally approved plans for rezoning the former funeral home for the purposes of Zaffis’ museum of ‘haunted objects.’ Plans include more than just a museum showcasing ever-changing exhibits of allegedly haunted artifacts; he plans to give lectures there, hold ghost hunts, and even weddings. With planning out of the way, all that’s left is the purchase of the building and moving of his collection.

If you’re worried that the building might face major remodeling, Zaffis told reporters, “I love the way it was laid out it was perfect the way the rooms are. I don’t have to alter anything… at this point in time, as far as alterations, there isn’t much I want to do. I love it the way it is.” Realtor records claim the house was built around 1900; Zaffis told reporters that half of the building was a former parsonage for the nearby church that was later attached via an extension to the funeral home. One local reporter stated that the building has been empty for a decade. Unfortunately, you shouldn’t rely on what any realtor (or reporter, even) tells you. Apparently, all of these facts are actually wrong.

“I don’t think there is really much with the building, and it is more so with my items because all of those have been removed from haunted locations,” Zaffis said. “I think people will be more interested in that than just per say the building.” But the truth is, this building has a rather long and interesting history well worth telling visitors. The 1876 Berkshire County Atlas map of South Adams clearly shows both buildings (highlighted in red) at their current location.

6 Liberty Street (originally the south half of the current building) appears on atlas maps dating back as early as 1876. It was once the residence of Dr. Harry Bigelow Holmes. Together with his father Horace, Dr. Holmes had a practice in town and was a member of the Massachusetts Medical Society. Before becoming a physician, he worked for a Chicago mercantile then spent a year working for the Atchison, Topeka, and Santa Fé Railroad. His home was at 37 Park Street.

On October 24, 1898, according to the North Adams Transcript, Dr. Holmes married Angeline Maria Sayles. The reception was held at Angeline’s home which would eventually become the second half of 6 Liberty Street. Angeline was the daughter of Charles Franklin Sayles, a civil engineer who designed a new plan for Maple Street Cemetery in 1869, who married in 1869 and moved to Liberty Street shortly thereafter. (Charles’ house has since been razed.) Before that, he was heavily involved with surveying for several railroads. Between 1859 and 1860, his first work in that field was as a rodman for a surveyor working on the nearby Hoosac Tunnel. 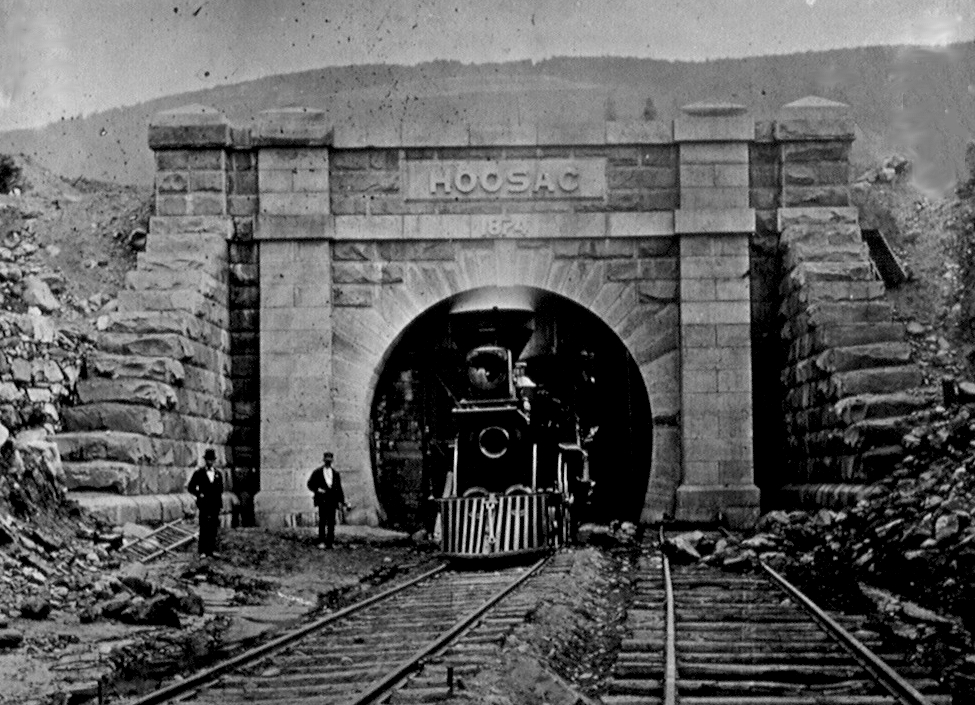 The first trains began running through the full length of Hoosac Tunnel in 1875. (Paul Marino)

Tunnel construction continued until 1877, but not before costing the lives of around 200 workers, earning it the nickname “the Bloody Pit.” Two of those workers–Ned Brinkman and Billy Nash–are believed to be the source of the hauntings. Both men died by being buried under tons of rock after an explosives “accident” on March 20, 1865. The man who had set off the charge too early, Ringo Kelly, was found strangled to death two miles inside the tunnel ten days later.

Harry and Angeline Holmes lived together on Park Street until at least 1902. Angeline’s mother Maria passed away in July 1904. That same year, the Berkshire County Atlas shows the couple were residing at 6 Liberty Street. Dr. Holmes died in June 1933; Angeline passed away in September 1963. McBride Funeral Home began in 1900 in North Adams. It was established by former professional baseball player Peter William “Pete” McBride who died at his business of a heart attack in 1944. Whether or not Pete passed away at the present building is unclear; though local papers say the funeral home relocated there in the 1920s, the Better Business Bureau states that it opened there in 1957. With the passing of Charles Sayles in 1921, it’s plausible that the McBride family purchased the property then for their business. Upon the retirement of Anthony McBride, the third generation of owners, the funeral home closed in 2011 and has been vacant ever since.

While it’s not the spookiest history of a building, it’s far more than just a disused funeral home. And at least some portions of the structure are more than 140 years old. While John Zaffis understandably wants to focus on his own collection, let’s hope he finds a few ways to give a little nod to the lives (and corpses) who graced those rooms over the years.