Classic Cryptid: The Truth Behind The Legend of the Jersey Devil - Pt. 1 - The True Story

Home / Strange Phenomena / Mysteries / Classic Cryptid: The Truth Behind The Legend of the Jersey Devil – Pt. 1 – The True Story

Classic Cryptid: The Truth Behind The Legend of the Jersey Devil – Pt. 1 – The True Story Almost everyone who lives in the northeastern United States has heard of the Jersey Devil once or twice. It’s one of the most famous early American legends, and one of the most often investigated and sought-after cryptids; the earliest reported encounters with it date back as far as the late 1700s or early 1800s. And as with many legends, there are almost as many different versions of the creature’s origins as there have been sightings of it.

The most common version of the legend goes a little something like this: In the 1700s, a woman named Deborah Smith emigrated from England to marry a Mr. Leeds, and went to live in the area of New Jersey now known as the Pine Barrens. When the story of the Jersey Devil truly begins, Mrs. Leeds had given birth to twelve children, and had discovered that she was about to give birth to her thirteenth.

Some versions of the story say that when she learned that she was pregnant with her thirteenth child, she reacted with fury and disgust, crying out “I hope it’s a devil!” or “May it be a devil!” 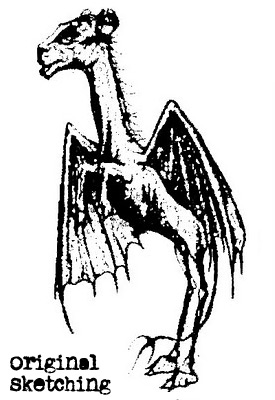 Other variations say that she invoked the devil during the particularly difficult and painful labor that followed. Be that as it may, when the child was born it was either immediately known to be unnatural by its appearance – being born with horns on a horse-like head, wings and a tail – or shortly after its birth changed into a devil-like creature. Again, these differences depend on the version.

There are even versions of the versions. One says that rather than cursing the child herself or calling on the devil during the birth, the child’s devilish nature was the result of a family curse, though it doesn’t mention which side of the family. Still another version mentions that the creature visited Mrs. Leeds every day; she would stand at her door and tell it to leave, until finally it relented and never returned.

Some stories say it was the sixth child, or the eight, tenth, twelfth or thirteenth. Some say it was born normal, others deformed. Some say the mother immediately drove it out of the house, while others say she confined it to the cellar or attic.

Another popular alteration of the legend says that a Mrs. Shrouds of Leeds Point, New Jersey, made a wish that if she ever had another child, she wanted it to be a devil. Her next child was born misshapen and deformed (though not necessarily unnatural). She kept it hidden in the house so curious neighbors wouldn’t be able to see him. Finally, one evening the child flapped its arms – which turned into wings – and escaped up the chimney, never to be seen by the family again.

Burlington, New Jersey claims (as do a few other locations) to be the birthplace of the Jersey Devil. They say that in 1735, Mother Leeds was in labor on a stormy night with her friends and family gathered around her. Rumors said that she was a witch, and that the child’s father might even be the devil himself. When the cursed child wasborn, it appeared to be perfectly normal, then in front of the eyes of the room, changed from a normal baby into a creature with hooves, a horses’ head, bat wings and a forked tail. It proceeded to beat everyone present, then flew up the chimney. It circled the village before heading toward the pines, and commenced to harry the town until a clergyman banished the creature for 100 years in 1740. In every version of the story, there are some consistent details. The name “Leeds” enters into many of them, either as a location or the name of the cursed family. Most agree on the final appearance of the creature as it left its birthplace.

There is also, potentially, some historical precedent for the story. One historian discovered that a Daniel Leeds owned land in Great Egg Harbor, New Jersey, in 1699, and that his family lived in Leeds Point. He also discovered that a Samuel Shrouds came to Little Egg Harbor in 1735, and lived across the river from the house of Mother Leeds. The Leeds and Shrouds names appear in many versions of the legend.

Another professor found that a “devil” was mentioned in historical and religious writings from the Burlington area as early as 1735. He noted that the name “Burlington” was used to refer an area of New Jersey from the city of Burlington to the Atlantic Ocean, which encompasses Leeds Point and several other locations associated with the legend.

It’s worth noting that the Pine Barrens itself is a fascinating region of heavily forested land. The area’s soil is sandy, acidic and nutrient poor, which led to sparse settlement as it was poor farming land. In spite of this, the uncommon conditions there enable the Pine Barrens to support a diverse spectrum of unusual plant life, including orchids, carnivorous plants (such as the Venus Flytrap), and a rare pygmy variant of the Pitch Pine, amongst others. Even before the birth of the Jersey Devil, the Lenni Lenape Native American tribes of the region referred to the area as “Popuessing,” meaning “place of the dragon.”

All of these details have to have come from somewhere, and that somewhere would be the huge body of encounters people have had with the creature over the past 275-odd years. We’ll look at some of those encounters in part 2.