The Green Man: The Pennsylvania Legend of Charlie No-Face On the outskirts of Pittsburgh, near where Piney Fork empties into Peters Creek, there’s an old neglected railroad tunnel covered in graffiti and filled with road salt. It was built in 1924 as the Piney Fork Tunnel to service coal mines along the Pennsylvania Railroad’s Peters Creek Branch. Abandoned since 1962, the locals have given it another nickname. To many people in the Pittsburgh area, this is Green Man Tunnel. Teenagers used to drive into the tunnel, turn off their lights, and call out to the “Green Man” who would appear from the darkness, his skin tinged green from a tragic electrical accident. If he touched your car, his electrical charge would either stall the vehicle or make it difficult to start. This might sound like just another urban legend, built up from fictional ghost stories centered on the decaying relics of past industry, but in this case, it’s a story established on truth. In order to find the real story behind the myth, you have to travel 70 miles north to a remote site near Youngstown, Ohio, known for generations as Zombie Land.

Zombie Land is a rural spot just north of Hillsville, Pennsylvania, where many urban legends were born. (Read more about it here.) Among the creepy things said to inhabit the area is the Green Man. Horribly disfigured in an electrical accident (or a lightning strike, according to some versions), this man with eerily-glowing green skin was said to wander the roads at night and chase anyone he came across. Teenagers looking for a good scare still head out to the area at night hoping to catch a glimpse of the Green Man, but they won’t find him. He passed away over 20 years ago. But he wasn’t a crazed lunatic or ghostly apparition. His name was Raymond Robinson. The #114 streetcar on the Harmony Route

Ray was born in October 1910 and grew up as a normal child in Monaca, just south of Beaver Falls, Pennsylvania. His father passed away when he was only seven years old, but his mother remarried soon after to her late husband’s brother. Just two years later, Ray’s life changed forever. He was with some friends on the bridge near 4th street which carried the Harmony trolley over Wallace Creek when the kids spied a bird’s nest high in the girders carrying the overhead wires. Ray was dared to climb up to it and he did. When he reached the top, he made contact with the wire carrying 22,000 volts of electricity. The force of the jolt threw him down to the bridge with severe burns on his face and body. Doctors at Providence Hospital didn’t expect him to live, but by some miracle, he did. 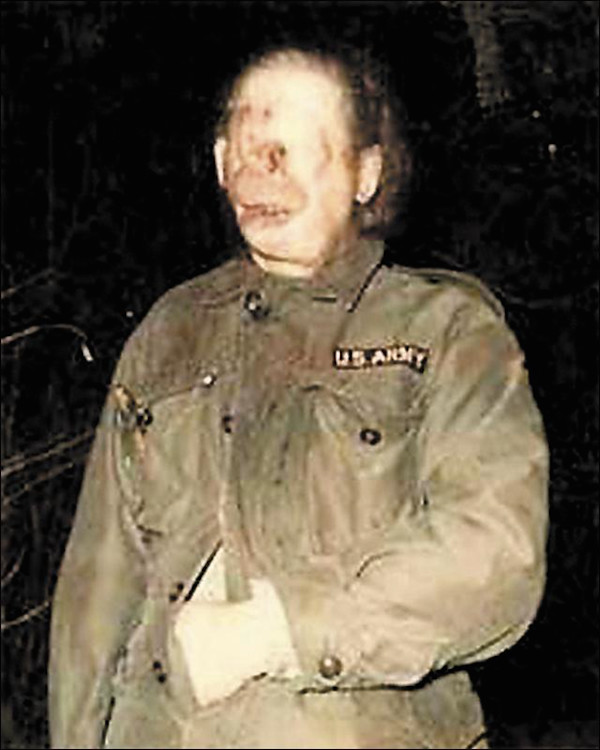 The incident left its permanent mark on Ray. His left arm was amputated at the elbow and his body riddled with scar damage. His face bore the brunt of the damage; Ray lost his nose (leaving just a hole) and his eyes, and his mouth was bloated and twisted. He became an unwilling recluse, fashioning floor mats and belts and wallets to earn some money. Eventually, he moved with his mother Lulu to a new home just west of Koppel where he lived in a house crowded with relatives. Restlessness overcame him, though, and Ray began taking walks during the day for exercise. His disturbing appearance alarmed locals. Some say neighborhood parents asked him to stay away because he scared the children; other reports indicate he disliked the attention. Either way, Ray chose to take his walks in the late hours of the night along State Route 351 between Koppel and New Galilee with one foot on the pavement, the other on the gravel. Though he was blind, he used a walking stick to help him feel his way through the darkness. Day and night looks all the same when you’re blind. “Charlie No Face” poses with teenagers

After being discovered by accident on his nightly walks, the tale of the Green Man—or Charlie No Face, as he was also called—developed. There are conflicting stories about where the “green skin” idea came from. Some accounts say he always wore his favorite green plaid shirt or other green clothes that reflected the color onto his pale skin while others say his skin was a pale shade of green. Either way, it became a popular pastime to head out to Route 351 and look for Ray. Those who weren’t too terrified to stop would chat with Ray over a smoke. He even posed for pictures, often in exchange for beer or cigarettes. 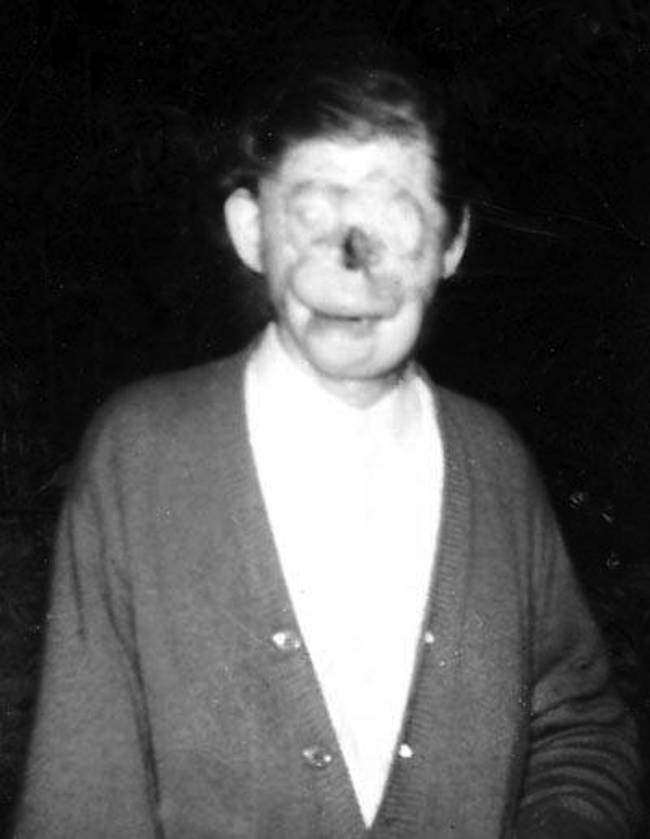 Those who knew him or took the time to stop for conversation found Ray to be very kind and one of the nicest people you could ever meet. Unfortunately, his disfigurement turned many people away. Even the negative attention and taunting he would get on his walks didn’t stop him; deep down, Ray was a lonely person who craved interaction with people outside of his family. His popularity reached its peak in the 1960s when cars caused traffic jams along the road as people gathered, hoping to catch a glimpse of Charlie No Face. Grave of Ray Robinson and his father

As old age slowly crept up on him, Ray ventured out for his walks less and less. By the 1980s, he moved into the Beaver County Geriatric Center (now called Friendship Ridge Nursing Nome) in Beaver, Pennsylvania. It was there where Ray passed away on June 11, 1985, at the age of 74. He was buried back in Beaver Falls at Grandview Cemetery, just a short distance from the location of the bridge where he met with his tragic fate as a child. You can read more about Ray’s story and the Green Man legend in the 1998 Post-Gazette article “Green Man’s Legend Continues to Grow.”

*UPDATE* The Green Man legend also appears on Ohio, according to the book Ohio’s Ghostly Greats by David Gerrick. This time, the setting is a remote section of Geauga County where, according to the legend, a town drunk crawled into a power substation one night and was electrocuted by a transformer. He survived, but his skin was tainted green. Embarrassed by his condition, he would only go out at night and occasionally peeked into the windows of cars parked along the roads nearby.