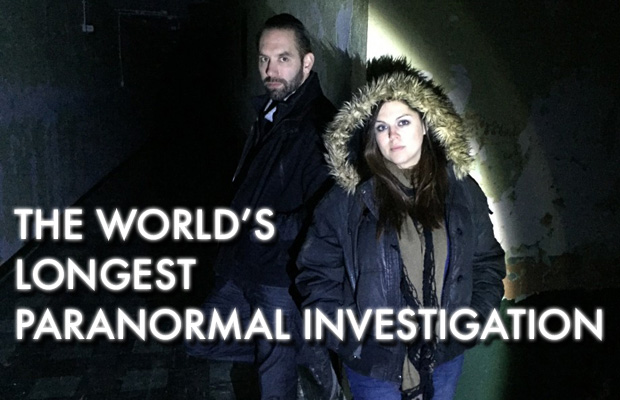 Halloween is only 100 days away, and today’s Paranormal Lockdown announcement at San Diego ComicCon is giving us even more reason to be excited about the spooky season. Destination America’s upcoming two-hour Paranormal Lockdown Halloween Special will not only be taking place inside one of the most legendary haunted homes, it’s also slated to be the longest paranormal investigation ever aired on television. Premiering Monday, October 31 on TLC, ghost hunters Nick Groff and Katrina Weidman will spend an extended period of time locked inside one of England’s most infamously haunted locations, The Black Monk House. The site of  one of Europe’s most violent hauntings, it was in the Black Monk House that the infamous Pontefract Poltergeist tormented the Pritchard family throughout the late 60s and early 70s.

The activity that went on inside the building during the time that the Pritchard family resided there is shocking, to say the least. Children were being thrown from their beds and dragged up stairs by unseen hands, objects were said to disappear into thin air, and upside-down crosses eventually began materializing on the living room walls.

“There are few locations in the world that frighten me to investigate, and the Black Monk House has a strong energy pull like nothing else I’ve ever researched,” Nick Groff told the press. “The history of the land holds a massive amount of bloodshed, and the house has a heart still pumping the negative forces continuing to harm the living.”

Many have theorized that the haunting may be partly due to the fact that the Pritchard family home is located directly across from what were once the local gallows. The terrifying activity that continues to occur inside 30 East Drive in Pontefract is often attributed to the Black Monk, a Clunaic monk who was hung for the rape and murder of a young girl. “The Black Monk House is an absolutely terrifying location that, as we’re hearing from the cast and crew, is already haunting the production team as they prepare to begin filming on location,” said Jane Latman, general manager of Destination America, “Marking Destination America’s first ghost hunt abroad, the special is an exciting milestone in our quest to present paranormal fans with the scariest supernatural stories known to man.”

The special Halloween addition of Paranormal Lockdown is guaranteed to be terrifying, and with the extended amount of time the duo will have to investigate, I think it’s safe to say we’re likely to be treated to some pretty fantastic evidence.

In addition to the special Halloween episode, Paranormal Lockdown is currently in the middle of filming its second season for Destination America, which is slated to air in 2017.

The Halloween episode is set to air October 31, at 9PM EST on TLC. Let us know what you think about the longest investigation ever aired on television in the comments below. If you’re looking for even more weird news, follow us on Twitter at @WeirdHQ or like us on Facebook!