Unpredictable: The Strange Life of R.C. “Doc” Anderson, The Hardest Working Psychic in the Bible Belt A promotional postcard advertises Anderson’s many skills for hire

As a youth, one of Robert Charles “Doc” Anderson’s earliest “visions” was of his brother’s face being blown to pieces by a German sniper. He told this story to his mother, who told him he was “waxin’ dramatics” and “gave (him) a good thrashin’… then she told my pa and my father worked me over too”. It doesn’t take a psychic to see where this story is going. The very next day a telegraph arrived with the news that Anderson’s older brother had been killed in action in Germany. He referred to himself as an astrologer, but built a career on his prophetic visions, including the death of FDR (and approximate date of his death) – which got him questioned by authorities and nearly arrested.

Anderson would gain attention for a number of written predictions, including the FDR predictions, he made on Christmas day in 1944 – described in Doc Anderson: The Man Who Sees Tomorrow as “one of the most impressive documents in psychical history”. In it, he predicted correctly the date that WWII would end in Germany; also predicted was the fact that post war Germany would be a country “disunited”, and that our war ally Russia would become “one of our worst enemies”. Anderson alluded to what could be seen as descriptions of the advent of the A-Bomb, and its’ game-changing use in Japan in 1945: “…we will create a devastating device that will tear the elements apart in it’s intensity, and that something will happen about the earlier part of August, 1945, that will change the whole course of the war against Japan…” Nuclear bombs were, of course, dropped on Hiroshima (8/6/45) and Nagasaki (8/9/45), and the war in Japan was over within days.

The molasses-voiced Anderson was described in one of the several tomes written about him as a “hearty, robust” man, a “six-foot-two inch giant” who sported a “trim, stylish mustache and beard”. After the success of his early predictions, he opened an office on the Tennessee/Georgia border near Chattanooga, where – over decades – he built a “psychical” empire for himself and his enthusiastically supportive wife, Ruth, and the couples’ four daughters. Over the course of decades, his business card expanded to include many specialties, among them: Matador, Circus Strongman, Prize Fighter, Marriage Counselor, Philosopher of Humanity and Astrologer. 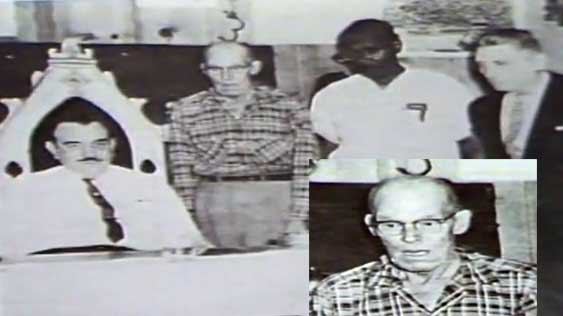 His predictions were accurate enough to garner him national attention on many occasions. Notable clients over his 40 plus year career would include a few Hollywood types – such as Doris Day, Eddie Albert (of ‘Green Acres’), and Denver Pyle (who played Uncle Jesse on ‘The Dukes of Hazzard’). Anderson was dubbed by various creative reporters as “The Man Who Sees Tomorrow”, “The Georgia Seer”, “The Man With The Radar Mind” and a “Master Mentalist”. His entertaining repertoire included various feats of the mind, including an act in which he claimed to be able to smash a glass by merely thinking about it. In the late 60’s, in a fit of theatrical genius that was likely inspired by his relationship with client John Shaw, an “oil man” from Texas, Anderson flawlessly blended Roman-Catholic mysticism, the art of dowsing, and hard core Capitalism in a new endeavor he referred to as “stigmata”. He claimed to be able to locate underground oil deposits with ease, as blood would appear and flow from his palms when he passed over a potential well.

Doc claimed that “he always knew (ahead of time) when he was going to get hurt” prior to several injuries of various severity in his days as a matador. In 1980, he told a Chattanooga news crew that at the age of 72 he was planning a “Final Olé” in Mexico that upcoming March. Alas, it was not to be. No one can know for sure if Doc had any premonitions of his impending doom – which was to take place just one day prior to his scheduled flight to Mexico and “Final Olé”.  Anderson tried to navigate a flooded roadway along a creek on the way to his office that morning. His car stalled in rising flood waters caused by heavy rains, and he foolishly attempted to walk to dry land. Witnesses along the roadside saw him lose his footing and become swept away in the rushing current. Rescue crews were unable to locate his body for a few days due to flood waters, and his body was eventually recovered just 100 yards from where he was seen being drawn under the water. Doc’s personal assistant claimed after the funeral that Anderson indicated to him before the tragic event that he “knew”. Doc Anderson artfully fends off an angry bull in Mexico

In 1970, Doc Anderson touted that he had  “ninety five percent accuracy in prophecy”. Here are a few of the predictions that he published that same year:

“we’re going to see cornfields and orchards wired for music”; “there will be a tremendous breakthrough with the discovery that plants and trees have a system similar to the human nervous system”

“vaudeville will return by 1976” on transcontinental flights, as passengers tire of in-flight movies and begin to demand live entertainment.

There will be a boom in “investment opportunities in every part of the nation” for trailer parks in the 1970’s, as high interest rates cause new housing construction in the US to grind to a near halt.

“Lasers will be used on coast to coast automatic highways. Your car will be guided by a laser beam, while you nap or read.”

Doc correctly predicted “Casual Friday”: “Informal dress will be accepted in the business world, and executives will work in dungarees, shorts or slacks!”

Corporations will hire prospective new executives in auctions similar to Antebellum slave auctions in the southern US, with prospective employees paraded in front of groups of businessmen as their attributes and details of their personal lives and resumes are shouted over a loudspeaker.

“Our High Schools will be racked with violence and turmoil”, “police sentries will guard the entrances”, “closed circuit televison will be installed to monitor the activity of students”

“Israel will prevail against all of her enemies”

“The US government under president Nixon will defoliate the entire Canadian border between our two countries. A strip from 50 yards to 100 yards wide will be chemically treated to remove all vegetation. Following defoliation, the border will be sealed with a wire fence to prevent unauthorized crossings.”

“I predict that a large ship filled with oil from the new fields near the arctic circle will collide with an iceberg. Immeasurable quantities of oil will spill… The efforts of many nations will be necessary to save the wildlife…”

“ARKANSAS: A HILLBILLY DISNEYLAND! I predict that an enormous, highly successful amusement center with a ‘hillbilly’ theme will be constructed within a few years near Bentonville, Arkansas. This will be the largest amusement and recreational complex in the nation…” Wal-Mart corporate headquarters is located in Bentonville, AR. Coincidence? I think not.

“A strange half-man, half-ape will be captured alive in the Oregon forest in 1978”

“The five cent beer will return to American life when a young man in Maine invents, and markets, an “instant beer pill”. These tiny pills will create a hearty glass of premium beer when they are dropped into a glass of ordinary water”