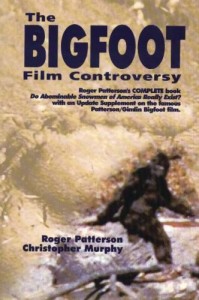 Hancock House Publishers of Surrey, British Columbia, Canada has done a great service to Bigfoot researchers by reprinting Roger Patterson’s original book on his quest for Sasquatch and a detailed analysis of the controversial film he shot.

Patterson says his search began in December, 1959, when he read Ivan T. Sanderson’s The Strange Story of America’s Abominable Snowman in True Magazine.

The article reprinted in Chapter One tells how Sanderson’s interest was piqued by Gerald Crew’s plaster casts of Bigfoot tracks published in the Humboldt Times newspaper in 1958. Patterson then collected newspaper articles from several California publications and began correspondence with Ivan T. Sanderson who shared copies of correspondence from his files. His search then lead to correspondence with John Green, the Canadian newspaperman who had started collecting information which eventually lead to the publication of three classic books on the subject of Sasquatch.

The early articles and illustrations Patterson collected are reprinted in full in Part One. Published in 1966, Patterson’s original book concludes with his accounts of his first “pre-expeditions” with Bob Gimlin into the Ape Canyon area of southern Washington. A year later, Patterson made his historic movie. Suffering from Hodgkins lymphoma and embroiled in controversy, Patterson was unable to update his book before his death in 1972.

Part Two is the “Update Supplement: The Filming and its Aftermath” compiled by Christopher Murphy. Murphy appears to be a latecomer to the field of Sasquatch research who is trying to capitalize on the work of others. Loren Coleman raises some interesting questions about Murphy’s history as a researcher. According to Coleman, at one point, Murphy questioned the veracity of the film, claiming to see a zipper in an artifact produced by enlarging the images. Murphy apparently changed his mind and began working with Rene Dahinden who had the copyright to the Patterson movie. Murphy published large format stills from the film, then wrote a book,Ohio Bigfoot, claiming to see “Baby Bigfoot” in enhanced images from the film, at which point Dahinden parted company with him. Although Murphy appears to be a dubious character, the material he presents in this book supports Patterson’s veracity.. After summarizing the events surrounding the filming, Murphy presents conclusions reached by experts who examined the footage. Two Russian hominologists affiliated with the Darwin Museum of Moscow, Igor Boursev and Dmitri Bayanov, considered the film “an authentic documentary of a genuine female hominid.”

Another Russian, Dr. Dmitri Donskoy, Chief of the Chair of Biomechanics at the Central Institute of Physical Culture in Moscow , evaluated “…the walk of the creature as a natural movement without any signs of artfulness which would appear in intentional imitations.”

A third expert, Dr. D.W. Grieve, Reader in Biomechanics at the Royal Free Hospital School of Medicine in London, England, hedges his conclusions based on the unknown filming speed. Patterson was busy being thrown off his horse at the time and neglected to notice whether the camera was set at 16, 18, or 24 frames per second.

Jeff Glickman, a Certified Forensic Examiner at the North American Science Institute performed an intensive computer analysis over three years, culminating in the publishing of a research report titled Toward a Resolution of the Bigfoot Phenomenon. He cites eleven reasons the film is not a fake and summarizes them with the statement “Despite three years of rigorous examination by the author, the Patterson Gimlin film cannot be demonstrated to be forgery at this time.” His most surprising finding is his estimate that the creature in the film weighed 1,957 pounds!

The late Dr. Grover Krantz wrote, “No matter how the Patterson film is analyzed, its legitimacy has been repeatedly supported. The size and shape of the body cannot be duplicated by a man, its weight and movements correspond with each other and equally rule out a human subject; its anatomical details are just too good. The world’s best animators could not match it as of the year 1969.”

In Chapter Seven, Murphy investigates some of the hoax claims that have surfaced over the years. Some claim the make up artist who won an Academy Award for Planet of the Apes, John Chambers, made the suit used in the film. In a 1997 interview, Chambers denied any involvement with Patterson and said that neither he nor anyone else could have fabricated the creature seen in the film. He was aware of the rumors about his involvement but didn’t try to correct them because it was “good for business.”

Perhaps the best part of Murphy’s work was debunking the claims of debunker Greg Long who fabricated The Making of Bigfoot, The Inside Story (Prometheus Books, 2004). Long makes many allegations about why and how Patterson faked the film but he has no evidence for any of his claims. A fellow named Bob Heironymous claimed to be the man in the suit, but couldn’t recall whether it was made of horse hide with hair glued on or a commercial gorilla suit from Philip Morris Costumes. Although Murphy does not mention this, it seems unlikely to me that any maker of commercial gorilla suits ever added breasts. 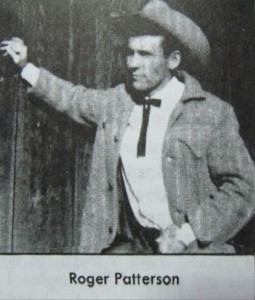 Murphy points out one glaring flaw in Heironymous’s story, “One claim made by Heironimus is impossible to accept. If he had been to the film site, he would surely remember that the site is some twenty difficult, twisting miles from the highway, not about four or five miles as he states.”

Having seen the Patterson film several times, read the book, and reviewed the controversy on Wikipedia, I am inclined to think the creature is exactly what Patterson and Gimlin said it is. If and when somebody does somehow collect a specimen someday, it will look like the creature in the film.

Regardless of what the skeptics say, the creature is not a man in a suit. There are plenty of hoax videos of idiots in ape suits on You Tube. The fakes are all clumsy, obvious to the most casual observer. To think that a rodeo riding cowboy from Yakima could create the creature seen in the film is ludicrous. No matter what some people may say about Roger Patterson’s character, the creature was beyond his, or anyone else’s, abilities to fabricate with the materials available in 1967.

The only thing that could change my mind is if somebody actually came up with the costume used in the movie and replicated the scene exactly. I don’t think that is going to happen because the suit doesn’t exist.

It is important to remember that not only did Patterson and Gimlin film the creature but they also collected its tracks which were pressed so far into the sand that no human could possibly have made them. Patterson also passed a polygraph test.

Whatever the reason they succeeded, Roger Patterson and Bob Gimlin are the greatest Bigfoot hunters in history. With patience, perseverance and rare courage, they tracked down the most elusive creature on Earth and captured its image on color film for all to see. These two men made one of the greatest scientific discoveries ever and suffered slander and scorn from small-minded people ever since. Roger Patterson is the quintessential tragic Western hero who was right all along but died before being vindicated. At least he had the satisfaction of knowing he had answered the question his book title posed—the Abominable Snowmen of America really do exist.