Something weird is lurking in the snowy forests of Pennsylvania, and one woman claims to have captured evidence of it on camera.

A woman named Polly took to Facebook a few days ago in order to post this photograph of a “sasquatch” that was snapped on her friend’s rural property. Like all great images of mystery creatures, the digital zoom has been clearly cranked to a max, making any kind of fine detail next to impossible to define, but it appears to show a gangly, crouched creature moving on all fours. Polly told Facebookers that the creature didn’t fear humans and moved like a juvenile primate:

A friend of mine lives in Pennsylvania and saw this as she called her dogs in. She was scared, because it didnt run off. She has 2 big black Chows. We think she saw a baby sasquatch. And that is what she thinks also, because she has never seen anything like this. She knows what a bear looks like, and she said it looked like a little gorilla. – Polly

The gangly beast does’t seem to fit the profile of other Bigfoot snapshots, so many commenters have taken to referring to it as a “troll”.

My first thought, and maybe I play way too many video games, is that the beast looks an awful lot like one of the Grunt’s from Halo. Someone get Master Chief on the the line.

What do you think is peeking at us in the bizarre photo? Are we looking at some kind of undiscovered monster? Or is there a more mundane answer to the pixelated image? Have you ever captured a photo of a strange creature lurking in your yard? We want to know! Share your thoughts with us on Twitter at @WeirdHQ, or share your evidence with us at our official facebook page. 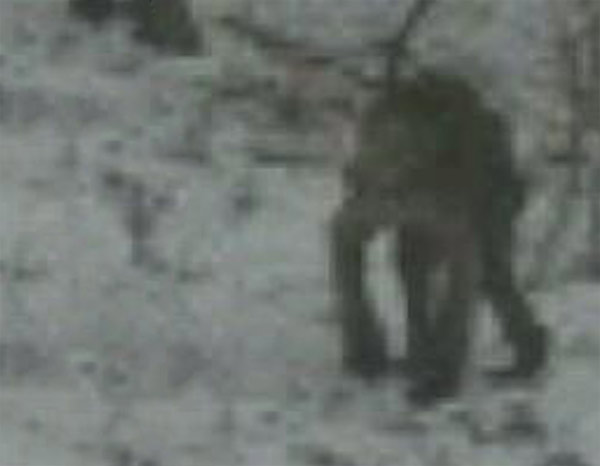