An argument can be made that the most feared of the tools of the arcane arts is the talking board.  Birthed out of the tradition of spirit writing, the talking board was first popularized in the early 1870s.  The first patent on the tool that is commonly recognized as a Ouija board was by Elijah Bond in 1890.  It was, however, one of his assignees, Charles Kennard who claimed to have been the originator of the name “Ouija” when, upon request,  the spirit board itself spelled out the name for him.  It was his contention that the name meant “Good Luck.”  Bond and Kennard proceeded to market their new invention through their partnership, The Kennard Novelty Company.  Thus the modern legend of the Ouija board was born.

The Ouija board has a stigma that makes it a object of avoidance and distain by even some of the most ardent investigators of the unexplained.  Tales of demons summoned from the darkest depths attach themselves at the faintest whisper of the Ouija board.  Everyone has heard a local legend of a Ouija board used at a slumber-party that sent frightened users into panic.  Tales exist of boards used to commune with entities existing in the realms of darkest depravity.  Other stories exist of Ouija boards that were so powerful, they were unable to be consumed by fire after the user attempted its destruction.

In early July, 2012 I was approached to review a modern version of the classic talking board.  This new version was no longer a board and planchette, but rather an app for the iPad.  Always looking for something new to explore and with no fear of being sucked into the abyss, I embraced the challenge.  The app I am referring to is called Ouija Table by an Italian outfit called Digital Press with the designer listed as Roberto Lombardo.  Please keep in mind that this review does not represent the totality of my interaction with the app.  It is representative of the time set aside specifically for research and review analysis.  What follows are the results of that review.

First, it should be said that I have professionally reviewed hundreds of products over the years.  While specializing in other types of media and equipment, I took reviewing this iPad app seriously.  I endeavored to give it a fair shakedown and put through the paces as one might use this app in the para-field or for their own amusement.

AESTHETICS OF THE DAMNED The first thing one sees upon activating the app is the words, “Ouija Table is Not a Game.”  Spooky music and chimes fill the air as the screen shifts to a menu-type display with a multi-meter of some sort (presumably an EMF meter) in the lower left corner.  Sitting in a common location checking out the basics of the app, the magnetic meter read 100+, with the radio/microwave reader in the .5 (high) range.  Upon clicking on the “About” button, the user is greeted with the following messages: “Ouija Table Is Not A Game,” “You Don’t Have Need To Do Nothing,” “Don’t Use Ouija For More 17 Continue Sessions.”  The preceding quotes are exactly as written.  There was one thing for sure, there was no supernatural force assisting the designer with English grammar.

After examining this area, the disclaimer section begs the user to click.  The following disclaimers are boldly presented: “Not Use Ouija If You Are Easily Conditioned,” “Don’t Request a Logic Result, We Not Manipulate Scanning,” “If You Feel Something Strange Don’t Use Ouija.”  These are followed by a longer disclaimer about how the app uses different sensors inside the device to capture anomalies near the device.  There is an explanation of some type of algorithm that translates the anomalies into words.  The English grammar of the disclaimer is so jumbled that it is difficult to determine if this is a simple game, or if the user is about to venture into the void.  I kept being subconsciously reminded, “all your base are belong to us.”

Lastly, before starting the first session, I set the device to “Airplane Mode.”  Previous research has reveled that when using similar para-apps (in spirit communication or other such work), using “Airplane Mode” cuts down on interference from the device itself.  Having read all the warnings and done my due diligence, I set out to find three locations to use the Ouija Table app that would present fair and diverse results.  At this point, how could one resist taking on the infernal beyond?

The first session took place on 7/9/2012 at an undisclosed location that can only be said to be a place of extreme trauma and misery.  The magnetic meter read steady 6-7, with the radio/microwave reader in the .1-.2 range.  The learning curve was low-moderate as I found myself wanting to ask questions, but then remembering that, “You Don’t Have Need To Do Nothing.”  I immediately noticed that the Ouija Table presented only letters of the alphabet, no numbers, no traditional “yes” or “no” and no “hello” or “goodbye” indicators.  Admittedly, this lack of holding to the traditional talking board design turned me off somewhat.

Most para-hobbyists would consider the name “Elizabeth” a direct response to a direct question.  Over time, however, I discovered that the app spells out random names, at random intervals, but in not so random sequences.  Further, sometimes the first letter was capitalized and sometimes it was not.  The names were primarily in English (with the later exception of Jeorge).  However, I attribute that particular name to the demographic group spelling with which the developer was probably most familiar. 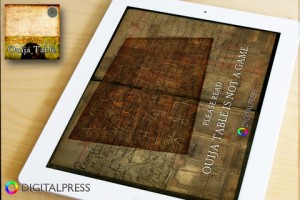 Session number two took place on 7/11/2012.  The location was the stereotypical ghost hunter haunt, a cemetery.  While a cemetery is not a place I frequent (other than for research purposes unrelated to the paranormal), a cemetery is where I could imagine many users of this app gathering to enjoy their new divining tool.  Again, I wanted to be fair.

Session two was what I considered more sterile.  During this session I asked no questions.  This was another forty-five minute session.  Six minutes in the device spelled the word combination “remove,” “hand,” “Samantha.”  Each word was exactly 2 minutes apart.  At sixteen minutes the device spelled out “turn,” “sentiment,” “red.”  Lastly, at the thirty-four minute mark the device spelled out “short,” “gate,” “illuminate.”  None of the words that were provided throughout the session seemed to be associated with my surroundings.

I can hear the rumblings of the para-apologists, so I should be clear in stating that there was no lack of illumination, no short gate, and I did not see any headstones with the name Samantha.  I would agree that a cemetery certainly can raise sentiments, but I was subject to an even more bizarre coincidence.  After ending the session, I was later notified that an associate had attempted suicide and almost bled out (red) at fifteen minutes after the hour which I started the session. Interesting, but not Earth-shattering to the reasonable mind.

At this point, I was looking forward to the third and final session.  This session took place in what I considered a neutral location on 7/12/2012.  This location was one that  I could neither confirm nor refute had any type of paranormal (or spiritually abnormal) activity.  At this location, I again asked no questions.  It is worth noting that in the notes that follow, I have used the capitalization as provided by the app.  At five minutes the device spelled out “go,” “grandfather,” “thomas.”  At nineteen minutes it gave me “fall,” “grandmother,” “alexia.” At thirty two minutes it spelled out “throw,” “gun,” “manson.”  Finally, at fifty minutes it spelled out “feel,” “document,” “jeorge.”  I could not determine any significant relevance between any of these words and my specific location.  It was interesting that back-to-back messages offered both “grandfather” and “grandmother” followed by direct names.   This was clearly the most names I received from the device in one session.  However, upon review of all the data, I got a name 70% of the time and always as the last word in the sequence.  This spoke to me more of programming than true randomization or spiritual contact.

The Verdict of the Damned:

Over the course of this Ouija Table experiment and review I have to admit that the app had its fun moments.  However, the bulk of the time was spent being bored to tears with zero interaction between the user and the device.  The user simply gets to stare at the screen and watch the orb roam about, wondering what the next word grouping will be.  The entire idea of a talking board is interaction.  That is what keeps the tension and excitement alive.  If one is looking for a random word generator, they may fare better building a ShackHack ghost box or thumbing through the dictionary pointing at random words.  It would even be more exciting to do the old style Scrabble divination (pulling random tiles out of a bag and see if they spell anything).

I did not find this app remotely as entertaining as Digital Dowsing’s iOvilus (which is a similar random word generator using sensors on an iPhone) or their ITC app.  At least those apps have more functionality and interactive features.  Further, much like EMF meters, tri-field meters and the like, zero evidence exists to show that any of the sensors in these devices pick up any type of signal, wave, vibe, etc that can be proven to be linked to the spiritual realm.  Also, the reading on the alleged EMF meter in the app seemed to have no bearing on the regularity or intensity of word sequences.  One would be better served using a real talking board or other such device for a more interactive and enjoyable experience, whether it be for fun or alleged research.

It is my opinion that I gave the Ouija Table a fair examination.  I was willing to accept the information it provided, but unwilling to make leaps of logic and connect the word sequences with any event or object of substance.  Doing so would have been no different than pointing to an blob in a wooded photograph and calling it a Sasquatch.  That is simply not my style.  Could longer time periods devoted to more intense “research” reveal more evidentiary results?  Anything is possible.  If that sounds interesting to you, then be my guest.  I have watched my last floating orb on an a digital letter-board.  To be fair, I should mention that I really hate orbs.  Overall, I was less than impressed.

If you still feel like giving the Ouija Table iPad app a whirl, you can pick it up at Apple’s app store. Maybe your experience will be spookier than ours.