There’s no shortage of fascinating ghost hunting technology on the market today. Whether you’re looking to see invisible spirits, hear their voices, or even communicate with them, there’s a good chance that some mad scientist out there has a gadget that claims to do just that. But for those who are less interested in communicating with spirits as much as banishing them, they’re usually stuck doing things the old fashioned way with holy water or sage.

Well, the days of relying on a biological exorcist are over. A new device claims it will blast the phantoms from your home with “Wave Killer” technology.

The Thai company Super Boondee has released a brand new version of the Trisaksri Ghost Repellent, a device with a design straight out of Ghostbusters, which the company claims will rid your residence of unwanted spirits thanks to its specially-designed circuitry. 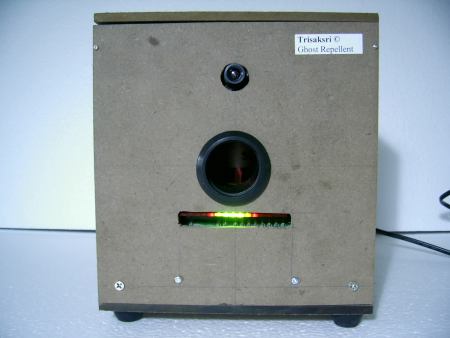 So how does it work? Well, when you’re ready to clear your home of negative entities, you simply flip the switch on the Ghost Repellent box, which activates a low-level electromagnetic field, condenser microphone, and infrared camera that work in unison to detect paranormal activity. Super Boondee calls this the “phenomenon receptor”.  When the machine detects an anomaly, it automatically fires off a “Wave Killer” radio blast that they claim is enough to force the nasty phantom to abandon its chosen haunt. Much like those sonic-rodent repellents, the box will simply continue to drive off ghosts no matter how many times they attempt to return. The Trisaksri Ghost Repellent makes some big promises, but it is an intriguing device, because it seems pretty par for the course when compared to other ghost hunting gadgets on the market. It makes use of infrared cameras and EMF meters, which are already found in any paranormal investigator’s tool kits, but the “Wave Killer” blast might need a little more explanation before ghost hunters bite. It’s also more than a little rough around the edges. While it might seem like a new innovation in supernatural circuitry, this is actually the second model of the Trisaksri Ghost Repellent that Boondee Labs has created. The first one was released way back in 2009 to much delight of the press. In fact, the company received so much ribbing for their ghost-busting device that they decided not to mass produce it, instead choosing to sell a couple prototypes on eBay. It appears like they’ve decided to give the gadget a second chance with a 2016 redesign.

So how much will the Trisaksri Ghost Repellent set you back? A cool $1500 plus an extra $140 for overseas shipping. That price might just be scarier than the ghosts in your house, especially when we have yet to see one in action after seven years in existence. If you’re curious and cash-flush, you can order one right here.

I’m curious to see whether such a device has been attempted by paranormal-minded inventors, if such a thing would be viable, how one would even be built, and how it could be improved-upon. We’d love the chance to test one out if anyone has the know-how and desire to whip their own version up. Like to tinker? Get in touch!

For what it’s worth, here’s the schematic that Super Boondee has presented:

What do you think about Super Boondee’s Trisaksri Ghost Repellent? Tweet us @WeirdHQ, drop us a line on Facebook, or start a conversation in the comments below!