Demons, Curses, and the Truth About Spirit Boards: Is Ouija's Dark Side Just Another Witch Hunt?

Home / Features / Demons, Curses, and the Truth About Spirit Boards: Is Ouija’s Dark Side Just Another Witch Hunt?

Demons, Curses, and the Truth About Spirit Boards: Is Ouija’s Dark Side Just Another Witch Hunt? Some call it evil. Others say it’s a portal to unspeakable horrors. But we all know it as the Ouija Board. Demonized by some, scoffed at as nonsense by others, this simple game has enthralled us for more than a century. Is it an evil tool or just a mirror of our own fears and prejudices?

Wood isn’t inherently evil, yet this board seems to have the power to make people convinced that they must get rid of it for their own protection. We often see the destruction or removal of things in fiction as a banishing of evil. In Tolkien’s The Lord of the Rings, a simple ring is destroyed to save Middle-earth. And who can forget a certain Baltimore poet’s talking bird refusing to leave and driving a man insane by simply uttering a single word:

“Prophet!” said I, “thing of evil!- prophet still, if bird or devil!-
Whether Tempter sent, or whether tempest tossed thee here ashore,
Desolate yet all undaunted, on this desert land enchanted-
On this home by horror haunted- tell me truly, I implore-
Is there- is there balm in Gilead?*- tell me- tell me, I implore!“
Quoth the Raven, “Nevermore.”

Spirit boards have a long and fascinating history dating back long before the Ouija name became associated with them. But it was the Kennard Novelty Company that launched the “mystifying oracle” from homemade contraption to household name. William Fuld didn’t invent the board, but he did take over the company and turn it into the Ouija Novelty Company in 1892. It was a lucrative enterprise, and the Baltimore-based business quickly expanded. Strangely enough, William Fuld died from a fall off the roof of his Harford Avenue factory–a building the Ouija board told him to build. 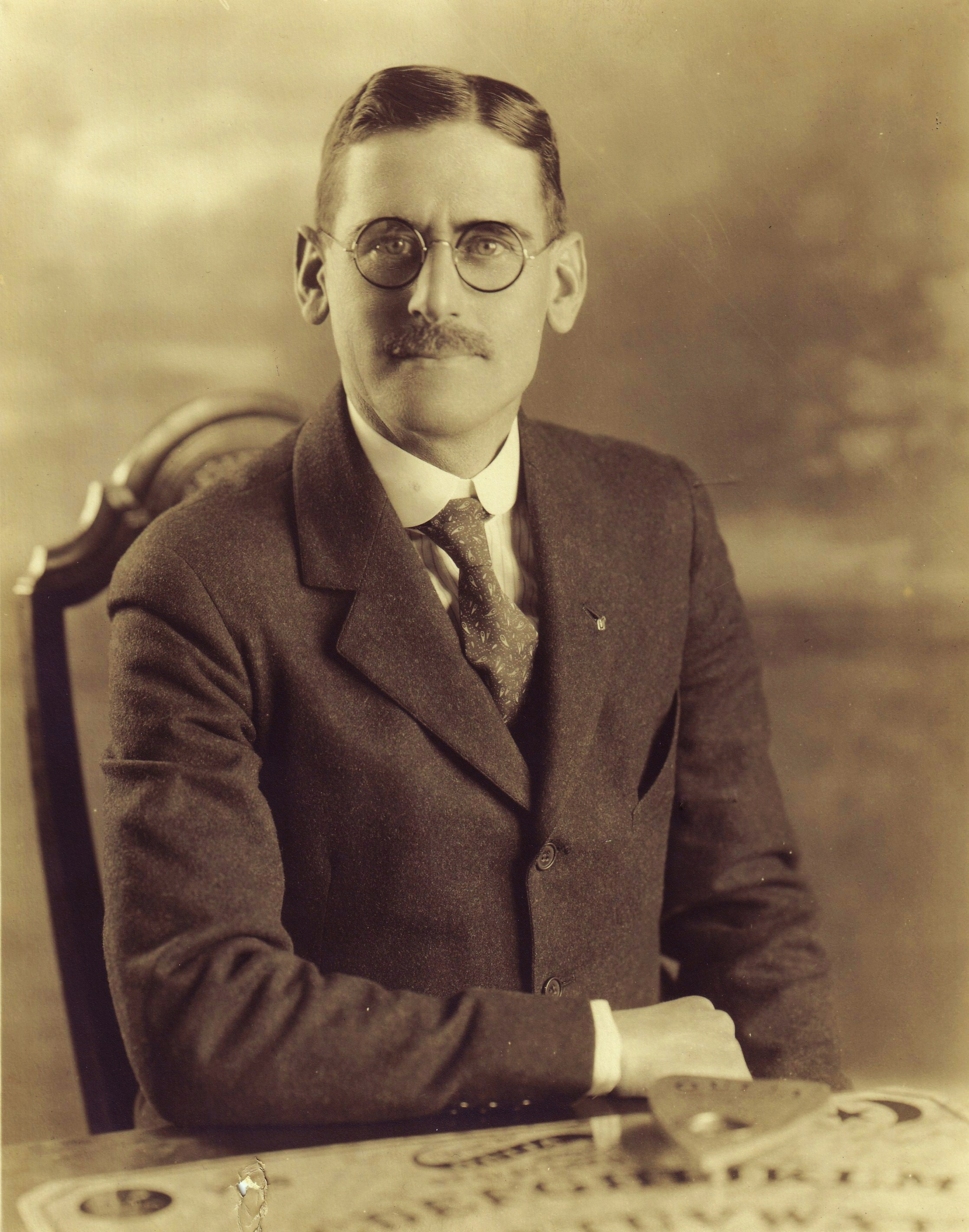 William Fuld, the man who made Ouija famous, poses with his board circa 1917. (Robert Murch)

Yet that wasn’t the first time bad luck was associated with spirit boards. Burning or breaking these boards is a custom as old as the board itself. In old newspaper accounts, frequent use or unsavory answers have led people to smash them to pieces. The Religio-Philosophical Journal reported on March 13, 1886 that the household of Jeremiah A. Long of Akron, Ohio, was experimenting with the new spirit board, but his many children were sleepless with nervousness about it. “You would not believe it, unless you should operate it yourself, what wonderful and strikingly pertinent answers are made,” Long told the New York Tribune.  “The whole town has been filled with the machines, but I smashed the one at my house.” That same year, the Democratic Northwest stated that a man named Jack who thought his family was spending far too much time using a spirit board burned it in the fire before leaving home on a trip. Puzzled by its absence, the family made another board and asked it what happened to the previous one. The board’s response, J-A-C-K B-U-R-N-E-D I-T U-P, came as quite a shock to Jack when he returned home.

Even today, some people decide to burn Ouija boards as a precaution. (reddit)

But it was not just innocent fun experienced by users. The November 21, 1891 edition of the San Francisco Morning Call told the tragic story of 28-year-old Mrs. Eugenie Carpenter of Bridgeport, Connecticut. Depressed over the separation with her boyfriend, she and a friend played with a newly bought Ouija board. When Eugenie asked the board if her lover would come back, it spelled out, “HE HAS CEASED TO LOVE YOU. HE WILL NEVER RETURN.” A few days later, a neighbor awoke to find Eugenie wandering the street in her nightgown muttering, “Ouija said so, and I knew it was so.” Her physician pronounced her insane, a “victim of Ouija”. In the early 20th century, Ouija boards were such a popular, fun amusement that Normal Rockwell made it the subject of a painting for the Saturday Evening Post.

According to the New York Times, Ruth Townsend of Chicago was sent to a mental hospital in February 1921 after admitting to doctors that her Ouija board communications turned from providing sermons to convincing her to live with her dead mother’s corpse for 15 days before burying her in the garden. And Ouija boards have been named by several murderers of the past century as the true guilty culprit. In one such case on March 7, 1930, Clothilde Marchand was murdered by two Seneca Indian women named Nancy Bowen and Lila Jimerson after Bowen’s late husband spoke through the board saying Clothide was a witch who had murdered him.

And speaking of witchcraft, there’s something about this behavior that echoes another time of drastic action based on fear: the Salem Witchcraft Trials. In the same way Ouija boards have been blamed for unfortunate and terrible incidents, suspected witches were singled out in Salem in 1692-3 as the cause of a range of maladies. What started at ‘fits’ experienced by three young girls escalated into the discovery of telltale signs of the accused being witches, allegations of shapeshifting, and “molestations from the invisible world.” Today, we understand that what happened in Salem was the result of mass hysteria. Spirit boards are often burned for their evil ways; back in Salem, it was people being wrongly accused and murdered (but not burned at the stake; that was in Europe).

Even with all the Ouija-related insanity, the board was generally thought to be a fun source of entertainment. But everything changed in 1973 when The Exorcist hit movie theaters. Those few screen moments of Regan playing with a Ouija board which led to an eventual exorcism connected all the dots in the collective fear centers of viewer’s brains. From that moment on, Ouija was no longer a game; it was now a tool of Satan. That belief inspired by a movie has stayed true to this very day. Pea soup: an unfortunate side-effect of Ouija board use. (The Exorcist/Warner Bros.)

In the past, bad incidents involving spirit boards were isolated incidents. Now, everything and anything is blamed on them. The vast of paranormal community still denounces them, and it’s impossible to throw a digital stone without hitting an internet story about how “Ouija ruined my life” (or even made someone possessed by a demon). (If you own a Ouija board and want it gone, please send it to me instead of burning it.)

Is the Ouija board really a vessel for evil? A prophet like Poe’s raven? Or just an amplifier for our own non-conscious thoughts? Are the puzzling, trickster-style responses occasionally received through it triggering us to blame it for our own unpleasantness? Or are we so determined to avoid acknowledging our own dark nature that we blame our own potential for evil on a piece of wood?

*Though a rare perfume mentioned in Biblical accounts, the phrase is a metaphor for a singular treatment to heal spiritual wounds (i.e. spiritual salvation).

Related ItemsBaltimoreEdgar Allan Poehistorymurderouijapossessionsalemspirit boardWilliam Fuldwitch trialswitchcraft
← Previous Story David Huggins, Father of Many Alien Hybrids, Paints His Abductions
Next Story → Got Something Haunted, Anomalous, or Just Plain Weird? Send it to the Traveling Museum of the Paranormal!