For centuries, one location in the United States has captivated the collective creepy imagination. Its mere mention is enough to mentally transport us to a moonlit dirt road in dark, creepy woods. Still a favorite topic of movies and television shows, you could call it “a ghouled place to live”, but Sleepy Hollow will suffice.

Now, Sleepy Hollow is indeed a real place. It’s not the same as it was back in 1818 when Irving penned his classic American ghost story, but almost two centuries later, the town still celebrates its biggest claim to fame. Formerly known as North Tarrytown, this village was renamed Sleepy Hollow in 1996 to pay homage to Irving’s story and identify itself as the home to America’s very first wildly popular ghost story. But while The Legend of Sleepy Hollow was a work of fiction, there are countless ghost stories and haunted places throughout the Hudson Valley making this spot one of the most haunted places in the country (if not the world).

When you think of New York, the legendary ghost ship known as the Flying Dutchman is certainly not a connection you might draw. But the ship was said to make landfall every seven years. One such place is the wide, lake-like part of the Hudson River called Tappan Zee. During terrible storms, the Dutchman has been reported sailing up the river. As if that’s not reason enough to avoid the water, the Manitou (or spirits of those who’ve drowned in the Hudson since native times, numbering at least several hundred) are blames for the rogue waves and sudden storms very common to the waterway there. Near Donderberg Mountain, it remains a custom for sailors to tip their hats out of respect for the imp, or dwerg, of John Coleman, skipper to Henry Hudson who drowned there in 1609, or else face the storms he will send down to try to sink their ships. Elsewhere on the Tappan Zee, Captain Kidd and his ghostly crew of the Adventure Galley are believed to haunt the waters beneath Bear Mountain Bridge in search of buried treasure, and the ghost of Rambout Van Dam appears in the Sunday morning mist below the Tappan Zee Bridge as a skeleton with glowing green eyes wearing ragged clothes in a rowboat. Brigadier General “Mad” Anthony Wayne is also believed to haunt the river, patrolling for enemy ships. Fog and storms are routine, unpredictable encounters on the Tappan Zee.

Ghostly women seem to be one common theme in Sleepy Hollow as well. (And I don’t mean the ‘Lady in Black’ said to haunt the apartments near Patriot’s Park.) Sleepy Hollow’s more frequently reported ghost, the Lady in White, is often seen and heard around Raven Rock. Her wailing is said to be a harbinger of oncoming winter storms. Her story, however, has a few different variations. Some say she was an Indian maiden who leapt to her death in the river at Raven Rock and was turned into a spirit by ravens. Another version says that an old woman was trapped in a blizzard while foraging for firewood near Spook Rock (a.k.a. Raven Rock). There is another variation which says that a woman went to the rock in her wedding dress to wait for her fiancé to return from war and froze to death in the snow; some people claim that during winter storms, you can still hear her calling, “My Beloved! Have you come for me?” Whichever version you prefer, people report floating lights crossing the cemetery on their way to Raven’s Rock on Buttermilk Hill, accompanied by ‘unearthly moans’, before harsh winter storms approach. An old legend claims these moans emanate from Raven Rock itself stemming from an old Indian curse. Another female spirit there is that of Mother Hulda, an old German woman living in a hut alone near the old burying grounds and Raven Rock. Though shunned by the Dutch community, her herbal remedies were always secretly in demand. In 1777 when the Redcoats marched in to Tarrytown, Mother Hulda took up her musket to defend the town. She lost her life in the battle and was buried in an unmarked paupers grave on the north wall of Old Dutch Church. There, she can still be seen wandering among the tombstones. She may have some spooky company in the form of a statue, as well. The ‘Bronze Lady’ of Sleepy Hollow Cemetery is a statue at a mausoleum. Teenagers claim that if you sit in her lap, spit in her eye, kick her in the shins, knock on the door of the tomb, and look inside, you’ll be plagued by nightmares for two weeks. Although if you ask me, that’s asking for trouble. The King Mansion, at Tarrytown House Estate and Conference Center, is haunted by the white-gowned ghost of Sybil Harris King who paces the second floor hallways. A popular place for weddings, the King Mansion may come with its own ‘woman in white’.

While Washington Irving’s headless horseman was a fictional character, he borrowed the idea from old European legends like The Wild Huntsman as well as historical incidents around Tarrytown. British Major John Andre was pulled into the treasonous plot of the infamous Benedict Arnold and captured by patriots near a tulip tree along Albany Post Road. He was later hanged for his involvement on October 2, 1780. Today, a large tulip tree still grows about where that fateful moment occurred near Andre’s Brook in what is today called Patriot’s Park. Still today, shortly before dawn, people have reported hearing a horse galloping fast past the creek, followed by the sound of uncontrollable sobbing, said to be that of John Andre mourning over his mistakes. If legends are to be believed, the only way to stop his piteous crying is to utter the words his captors first spoke to him: “What party are you from?” But what about the headless Hessian, you ask? Well, you might be surprised to learn that there actually was one. Many Hessians fought with the British as mercenaries during the Revolutionary War. (And yes, Irving was named after General George Washington.) One of the clashes with American troops occurred just nine miles from the heart of Sleepy Hollow in what was known as the Battle of White Plains. According to a memoir written by General William Heath in 1798, a cannonball took off the head of a Hessian artilleryman during this campaign. And of all dates for this incident, it happened on Halloween of 1776. A year later, bodies strewn over the same hills were removed and it’s believed that this headless Hessian’s skeleton was then taken and interred among the dead at Old Dutch Burying Ground. At midnight, the headless Hessian is reported to ride his horse at the Old Dutch Church and Sleepy Hollow Cemetery even to this day. Other sightings include a headless Hessian in full uniform on Mount Airy Road near Teller’s Point some ten miles north of Sleepy Hollow and yet another on Albany Post Road at the Rogers-Haight Homestead (where allegedly a soldier lost his head in an argument with another soldier over a pig). Lastly, no list of hauntings in Sleepy Hollow would be complete without mentioning Washington Irving’s hone named Sunnyside. Originally a simple tenant farmhouse built back in 1656, what Irving called “Wolfert’s Roost” became his home in 1835. He remodeled it extensively, adding a Spanish monastic-inspired tower and turning the house into what resembles a Dutch mansion. But even when Irving moved in, there were whispers that the house was haunted. 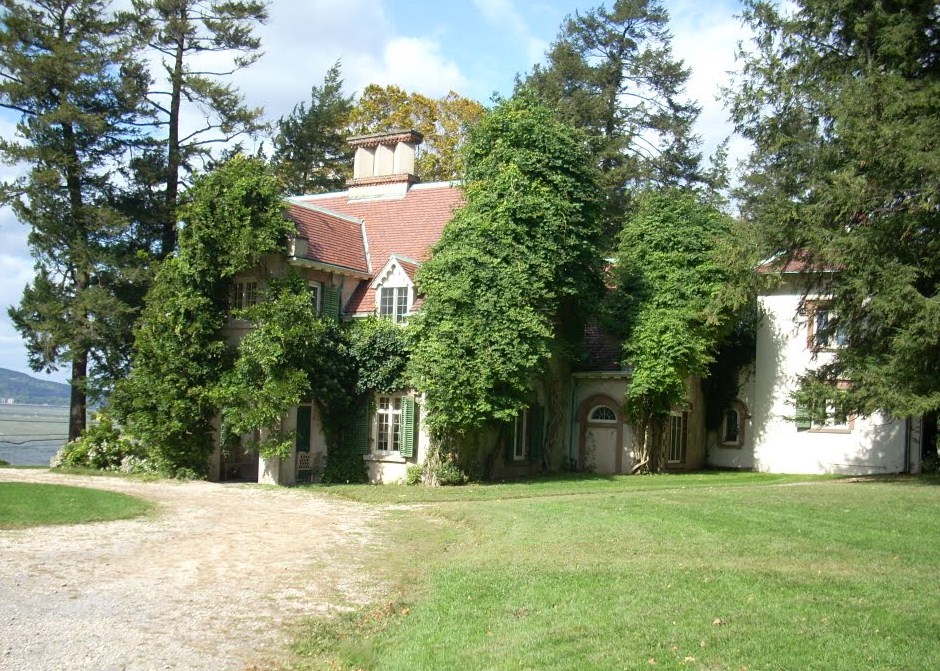 Sunnyside, the historic (and haunted) home of author Washington Irving.

After thorough renovations in 1945 made possible in part by John D. Rockefeller, Sunnyside opened as a public museum in October 1947. According to the New York Times article on its grand opening celebration, the centuries-old ghost story is that of a haunting by “…a young lady who wandered through the orchard. She is said to have died of love and green apples.” Irving himself claimed to have seen her in an upstairs bedroom on one occasion. She may have otherworldly company, though, since Irving’s five nieces are believed to haunt the house and property, tidying up the museum after it closes. Even the love of Irving’s life Matilda Hoffman—tragically killed at 17 by consumption and believed to have been part of the inspiration for Katrina van Tassel—is said to still peek at visitors from behind trees in the old orchard. The home’s original owner, Wolfert Acker, also haunts the same orchard.

Yet the second best-known ghost of Sunnyside is none other than Washington Irving himself. In 1843, Irving wrote, “I really believe that when I die I shall haunt it [Sunnyside]; but it will be as a good spirit, that no one needs to be afraid of.” An “amiable ghost”, Irving has been witnessed in his former bedroom where he died on November 28, 1859, as well as his study. Whether or not it’s quite considered amiable, it’s believed that Irving’s ghost has a habit of occasionally pinching the butts of women. Forever the ladies’ man, I guess.

As if that weren’t enough ghosts, every April 25th, the spectral Lincoln Funeral Train is said to roll past the estate on the old Hudson River Railroad line making its annual spooky pilgrimage to Springfield, Illinois, as it has since 1865.