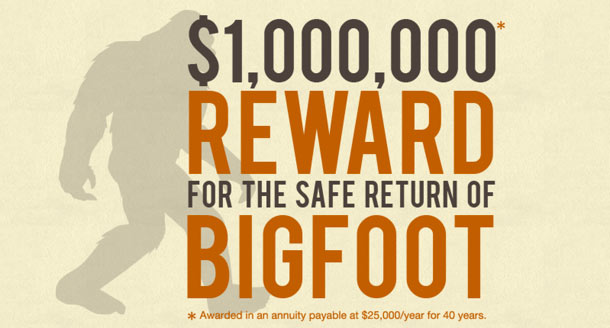 The Olympia beer company is now offering a $1 million reward for what they call “the safe return of Bigfoot” in the pacific northwest.

According to a press release, the owners of the Pabst Brewing Company is offering the reward for “irrefutable” evidence our our hairy friend Bigfoot.

Olympia Beer states that the rules are that the winner must prove the “the irrefutable existence of Bigfoot at some time during the period beginning January 1, 1989 through March 31, 2014.”, and they are serious about the evidence being irrefutable. The rules state that proof must be DNA, from either hair, blood, tissue, or saliva. I wonder if someone could get Bigfoot to spit at them.

We have been sharing the same backyard for over a century and we believe it’s time to do what has never been done, and that is to offer a one million dollar reward to anyone who can ensure the safe capture of Bigfoot. When we say safe capture that means Bigfoot has to be alive and breathing folks, with no wounds. That’s right you can’t use any act of violence, no guns/knives/boxing gloves/nets/etc, only sugar or sweets to lure him in.

Bigfoot and beer, what could go wrong? No offense to beer drinkers around the world, but I hope that we do not get a bunch of drunk hunters chasing down every hairy animal in the woods near them.

Are you interested in an “easy” $1 million? Olympia Beer wishes you happy hunting! To register for the contest, you can visit the official website.

What do you think?  Is this a good idea to help in finding bigfoot, or will it cause more hoaxes? Are you going to take a crack at it? We want to know! Tweet us @WeirdHQ, drop us a line on Facebook, or leave a message in the comments!

Related ItemsbeerBigfootbountyContestHuntingmillion dollarsOlympia Brewing CompanyPabstSasquatchyeti
← Previous Story Ask a Wizard: What the %@($ are the Black-Eyed Kids?
Next Story → Lawyer Sues Priests for Failure to Banish “Fart Demons” from Home