Is there something on Mars they don’t want us to see, or is it just a big old red desert, as we’re led to believe?

Last week the latest in tip-top technology NASA have soldered together landed on the red planet safely in the latest bid to provide us earthlings with information from our neighbors. Yet, only moments after the Curiosity rover landed, the conspiracy world went abuzz once more with stories about the Martian landscape. Our intrepid robot explorer seemed to photograph a massive crash or explosion in the distance, sparking rumors that it was an alien craft that Curiosity had caught crashing into the Martian surface. But engineers were soon out with their pens and rulers and supercomputers trying to explain what the photographs had shown. And they came back with this explanation; the ‘explosion’ captured by Curiosity was actually its landing device, or ‘Sky Crane’ which helped to lower the rover into the Mars atmosphere, which had severed itself from Curiosity and purposely crash landed, some 2,000 feet away, in the distance, thus causing this pyramid shape of soil and debris flung into the air by the craft. The fact that gravity is 38% less of that on Earth was the reason that Curiosity managed to capture the event. Yet many scientists still claim that it was statistically impossible for the rover to capture its own crash landing. And so more doubt has been cast over what is really going down on the Martian surface, hmmm… 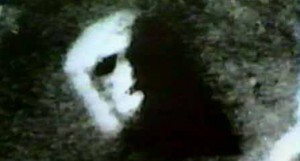 Of course, this isn’t the first theory that Mars was or is inhabited by some extraterrestrial beings. The theories go way back, and involve a whole plethora of dubious yet somewhat enthralling research and imagery, mainly thanks to our recent ‘human’ presence on the red planet. Of course this ‘research’ goes from being in the ‘hmm, that’s kind of interesting’ variety to the, ‘wow that person should be in a padded cell’, end of things. The classic example is the face on Mars in the Cydonia region of the planet as snapped by the Viking 1 Orbiter back in 1976, which has sparked many a debate surrounding the idea that our neighbor Mars was once inhabited. And then the monumentally less impressive ‘skull’ which was just laying about the surface, and not to mention the dead storm trooper that somehow strayed from his pals, a deserter of the Empire, perhaps. My personal favourite though, is what has been dubbed the Mars mermaid, or the ‘Woman of Mars’. What is more than likely an oddly weathered rock formation does look creepily like a woman pointing to something, but to what!? Sadly no follow up pictures were ever snapped, so we’re left wondering.

But it doesn’t end there, oh no. Near the ‘face’ in the same region, Cydonia, the Viking orbiter also photographed what appear to be pyramids. These ‘pyramids’ are probably the biggest feather in the conspiracy world’s cap, as it lends quite strongly to the idea that the race that built the pyramids on our own little blue world, weren’t of this planet at all, but some distant, alien breed. Interestingly, the second man on the moon, Mr. Buzz Aldrin, also supports a similar claim. Buzz went live on national TV and announced that there was a monolith on the Martian moon Phobos. Now, I’m not always one to believe the word of an old man without evidence, but when that man has actually been in space, it makes me think, a bit. Which is interesting, because apparently there’s a similar monolith on the Mars surface too.

Then there’s the unusual case of George King, another man who claimed there was life on Mars, including a number of other planets in our solar system. King claimed that in 1954, while washing some dishes, a voice told him “Prepare yourself! You are to become the voice of Interplanetary Parliament.” Intriguing, no? It continues, “A week later, an unnamed but supposedly world famous swami was reported to have entered King’s locked apartment. King claims the swami instructed him to form a group dedicated to helping the planet, and that the swami further taught him in yoga, prayer, and meditation. According to King, this training enabled him to receive telepathic messages from Venus, the first coming from Aetherius. King rented space in Caxton Hall in London, in which he channeled Cosmic Masters and recorded their messages. Based on his experiences and these messages, King founded the Aetherius Society in the following year, 1955.” King also claimed that his mother travelled in a flying saucer, an event which was recounted on a now famous BBC show, documenting King’s claims. In the same show King also channels and extraterrestrial in what must have been television gold at the time. Of course King was largely discredited by all and everyone, mainly scientists, though the Atherius society he founded still exists in some shape or other today.

Of course, then there’s the whole other side of the conspiracy fringe, the less than reputable Alex Jones, whose info-wars website claims that the US government for some time has been planning on defending us from an impending Alien invasion, of course unless this is just a false flag for our enslavement and the reptile led NWO to take over our brains and force us to make tennis shoes for our new alien overlords for all eternity.

This list of conspiracies surrounding Mars goes on, seemingly, forever. Perhaps an ancient civilization did once inhabit the land, perhaps they came here when their fuels and food began to disappear, or, perhaps, they’ve just got a load of really cool shaped rocks. You decide, or let Curiosity kill the cat.