America’s most uncelebrated UFO hotspot first came into public perception in 1987, when it was mentioned in passing in Dr. J. Allen Hynek and Philip Imbrogno’s, Night Siege: The Hudson Valley UFO Sightings. Though Pine Bush played only a minor role in the fantastic Hudson Valley UFO flap of the mid-1980s, it was just outside of Westchester and Putnam counties, where the bulk of the sightings were taking place.

The Pine Bush sightings, however, would continue to grow both in number and frequency. Even as reports of the Hudson Valley’s much publicized “Westchester Wing” or “Westchester Boomerang” began to diminish after reaching a peak of nearly two thousand sightings between 1983 and 1987—just next door in the Wallkill River valley area of neighboring Orange County, Pine Bush was becoming more and more active with unexplained phenomenon of its own.

In 1991, New Jersey resident Ellen Crystall published Silent Invasion, a book chronicling her eleven year investigation into the mysterious activities in and around Pine Bush. For the most part the book fell on deaf ears. Many UFO enthusiasts scoffed at Crystall’s outlandish claims of having seen up to a dozen strange craft in the sky at once, landing in and rising out of fields—often at close range, sometimes merely a stone’s throw away. Still others remained skeptical of the unconvincing photographs which accompanied the book. These photographs are unclear, Crystall explains, due to intentional “magnetic” or “microwave” disruption focused on the camera/film by the aliens, in an effort to “camouflage” their craft and to protect their anonymity.”

But, even though it was overlooked by the media and mainstream UFO culture, Pine Bush did begin to slowly attract attention. PM Magazine did a segment, (and many years later Sightings and Strange Universe would visit), Ellen Crystall embarked on a short-lived talk show jaunt—Joan Rivers, Geraldo, People Are Talking. She brought Omni Magazine out into the fields to see the strange lights for themselves. She took thousands of photographs. But for the most part, Pine Bush continued to go unnoticed. 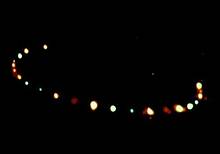 For the few who did notice, and were curious enough to journey to the small town to see for themselves, however, Pine Bush proved intriguing enough to bring them back. Again and again. A small, eclectic group of eccentric investigators and dedicated skywatchers began to form, returning regularly to the mysterious fields and back roads. And the phenomenon itself was becoming stranger all the time, and harder to define: Reports of lights in the sky abounded, back then. Phantom beings and strange animal sightings were not uncommon. Mechanical rumblings from deep underground were often heard. Farmers reported seeing strange lights over their fields at night, only to discover large sections of earth on their properties had been moved, as if by tractors, the next morning. Warm gusts of air were felt blowing from out of the woods, even on the coldest of nights. Strange white orbs of light (affectionately referred to as “Tesla Globes”) and intrusive red mist (invisible to the naked eye) began to appear regularly in photographs.

It was the early nineties. The “UFO abduction” craze was spreading like wildfire throughout the country, and Pine Bush was no exception. Abductees began to come forward, organizing meetings and support groups, and planning excursions into the fields to go skywatching, or “UFOing”as the locals termed their nocturnal pastime. And (though rumors abounded among the small, yet growing, group of skywatchers who gathered almost nightly on West Searsville Road) famous abductee and author Whitley Strieber was still half a decade from admitting that much of his own experience, eerily and starkly described in his best-selling Communion, did in fact take place in his cabin outside Pine Bush.

Even as the core group of Pine Bush locals continued to watch the skies, keeping to themselves and eschewing all newcomers and outsiders, the number of interested people making the sojourn out to the small farming community continued to grow, until, by 1995 you could find a line of cars parked along West Searesville Road on virtually any weather-permitting night. Dedicated UFO enthusiasts would gather together to discuss the paranormal, to fling wild theories, and watch odd lights dart about the skies.

It was this ever growing, evolving group of people who began to define the personality of Pine Bush. While some of them were genuinely deluded, seeing UFOs and conspiracies everywhere, some were quite level-headed, bringing new investigative talent and insight into the field. Some skeptical, some convinced. But all inexplicably drawn to this place for no reason other than to gaze up at the night sky, up to the stars, hoping against hope to catch a glimpse of the unknown. In the Summer of 1992, Ellen Crystall was contacted by Dr. Bruce Cornet, a geologist who, after reading Silent Invasion, felt compelled to visit Pine Bush. By this time, the first signs of encroaching urban development in the area were becoming evident, as civilization began to close in on the rural hotspot. Ms. Crystall’s own investigation was winding down, and she began to frequent the area less and less. Dr. Cornet, on the other hand, could be found almost on a regular basis, and was initiating an investigation of his own. He conducted magnetic and geologic surveys of the area, and came to some rather startling conclusions. Cornet claimed to have discovered underground transmitters sending polarized magnetic photon beams up into space. His theories went on to become even more esoteric. He boasted frequent close encounters and interaction with extraterrestrial craft which he called TLPs (Transient Luminescent Phenomenon), as opposed to the more generic term UFOs. He claimed telepathic communication with the entities behind the phenomenon, and believed that they were gradually educating him, slowly revealing their presence and intentions, in a way that he could handle on an intellectual level.

As Dr. Cornet continued to immerse himself in the Pine Bush phenomenon, the continued urbanization of the area began to seriously threaten the sanctity of the skywatchers. New homes were popping up everywhere, and with them, “No Trespassing” and “Private Property” signs appeared in places that had traditionally been open to skywatching.

By the end of 1996, sightings had reached an all time low, and Dr. Cornet’s theories were becoming more unorthodox. Hotels, restaurants, banks, and convenience stores began to appear, almost overnight, and Dr. Cornet announced his belief that, according to his most recent geologic studies, the entire Wallkill River valley area was an exact scale replica of the Martian landscape Cydonia, home of the infamous and much alleged “Face” and “Pyramid.” He dubbed Pine Bush “Cydonia II”, while police began to quietly patrol the once quiet backroads, courteously asking skywatchers to keep it down, or to please find somewhere else to park. The Pine Bush saga was at an all time low.

Then, on May 17, 1997, Dr. Bruce Cornet, along with Marc Whitford and Dinah Bertran, recorded, on high eight video, the flight of a mysterious black triangle at close range. In a time when Pine Bush was going through an inordinate, paranormal dry spell, this was a much needed reaffirmation of the existence of a true enigma. Though not necessarily supportive of any of the particular theories or wild speculations that had cropped up during the phenomenon’s recession, this was a refreshing confirmation of the persistence and faith of the dedicated skywatchers.

This faith and dedication would soon be put to the test, however. Just as sightings and reports of strange lights and phenomenon began once again to pick up pace, with a renewed vigor not seen in nearly five years, so did the continued urban development. New homes along West Searesville threatened issues of freedom and privacy. It was not long before the new residents of these homes began to take notice of the men and women outside, staring up into the star filled sky, searching for flying saucers. Conflict was inevitable as, for the first time the general public confronted the UFO culture on common, neutral ground. For the first time, public perception of the UFO phenomenon is taking place on a personal level, free from the sensational glamorization of the media. This is a unique, unprecedented occurrence, and the sociological implications are fascinating. Only human culpability and open-minded understanding will determine the future of UFO watching in Pine bush.

Update: As of January 2004, skywatching has been banned in Orange County. Though the legalities of this are uncertain at the time of this writing, apparently anyone found guilty of trespassing or parking with the intention of “skywatching”will be subject to incarceration and/or fine.

Many of the researchers and skywatchers of the area have moved their efforts to the mysterious and enigmatic Wanaque, New Jersey, where they claim to experience many bizarre sightings and “interdimensional phenomenon.” They have dubbed the place “The New PineBush.”