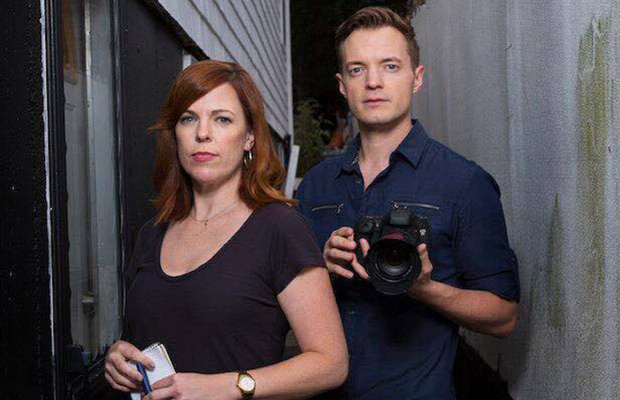 As if we weren’t already excited to watch Ghost Hunters alumni Amy Bruni and Adam Berry on television again, the duo just dropped some big news: their new series, Kindred Spirits, is moving to TLC. Even better? It premieres next month. We’ve seen it, and it’s fantastic.

Ever since their departure from SyFy’s Ghost Hunters in 2014, fans of the dynamic duo have clamored for them to return to TV, so when Bruni and Berry announced that they were slated to executive produce and star in a new series for Destination America, viewers were thrilled. So was Destination America’s parent company, Discovery Communications, because they’ve moved the series over to TLC, a channel with huge viewership numbers.

The series, titled Kindred Spirits, follows Amy Bruni and Adam Berry as they investigate ghostly cases that revolve around frightened families who are often unsure of who they’re being haunted by or why. As two of America’s leading ghost hunters, the duo leave no stone unturned as they attempt to crack the case and help bring peace to both the restless spirits and the families they haunt.

The first episode features a mother and daughter from Little Meadows, Pennsylvania, who have been dealing with broken lights, mysterious scratches, and most alarmingly, a strange figure appearing to watch them from the woods at the edge of their property. It takes Amy and Adam multiple investigations to get to the bottom of the strange activity, but the case takes a heartbreaking turn when they do. I’ve seen the first episode, and can attest that this the kind of paranormal reality series that television has been sorely lacking. Kindred Spirits offers a deeply personal look at families haunted by loved ones, the effect these hauntings have on them, and offers solutions to paranormal activity that rely on sensitivity rather than bravado. I couldn’t imagine this show in the hands of anyone other than Amy and Adam.

Kindred Spirits premieres on TLC on Friday, October 21st at 10/9c, immediately following the premiere of A Haunting at 9/8c. Stay tuned for our review of the first episode and more exclusive looks at Kindred Spirits as we near the premiere.