The Ghosts of A Horrific 1973 Arson at the Upstairs Lounge In June of 1973, gays and lesbians across the United States were celebrating the fourth anniversary of the Stonewall Riots in New York City. Gay Pride parades marched throughout major cities across the country. But meanwhile in New Orleans, the disorganized LGBT community made little effort to hold any official events. Sunday, June 24, marked the end of what little celebration the city witnessed. An all-you-can-drink beer bust was held at Upstairs Lounge, marking the close to pride weekend.

In the theater room, the small congregation of the Metropolitan Community Church held Sunday service. The gay and lesbian congregation had just recently relocated to the home of Reverend William R. Larson, yet the bar held significance as their “spiritual home.”

As the voices singing United We Stand wafted from the assembly, bartender Herbert Cooley continued pouring drinks for the dwindling crowd. Regular customers both young and old sat both at the bar and among the scattered tables around the room. An argument broke out in the afternoon, and Herbert ordered two men to leave–one of whom was a well-known hustler and troublemaker named David Dubose. In a rage, David stormed out of the bar, shouting, “I’ll burn them all out!”

A can of lighter fluid was purchased by an unidentified man at a nearby drugstore minutes later. The tragic blaze at the Upstairs Lounge destroyed everything in its wake. (Times-Picayune/Landov)

Shortly after 7:00 PM, a man approached the front of the Upstairs. He opened the heavy steel entrance door and tossed in a Molotov cocktail. Before fleeing the scene, he slammed the door shut and padlocked it. The fire quietly smoldered between the two closed doors. Then, the taxi buzzer rang. Rasmussen thought it was strange, since no taxi had been called. He asked Luther Boggs to shout down to the cabbie that there was no need for him to wait. As Luther opened the stairwell door, the influx of oxygen fed the flames. In seconds, a fireball engulfed the bar.

Panic swept through Upstairs Lounge as men and women scrambled to find an exit. Some hid beneath the white grand piano while others clamored at the windows. Douglas “Buddy” Rasmussen, bartender in the downstairs Jimani Lounge, hurried upstairs through a back door to find his partner Adam Fontenot. Buddy rounded up as many people as he could find in the dense smoke. He led about twenty individuals to an unmarked rear exit and out to the streets below.

From the windows, the trapped crowd screamed and fought their way through the solid iron bars covering the openings, squeezing through the openings and leaping in a panicked heap on the street. The crowd below watched in horror as the customers unable to squeeze through the narrow slots tried in vain to escape. Reverend Larson struggled at the side of a window, reaching out with his arm and head. As the flames crept higher, he cried out, “OH, GOD! NO!” His lifeless body stood burned in effigy poised in his final moments of escape.

Sixteen minutes after the blaze engulfed the lounge, the New Orleans Fire Department extinguished the flames. The intense heat left bar stools twisted like pretzels. Victims were burned beyond recognition. The inferno left a death toll of 29 souls. Three more died from their injuries. 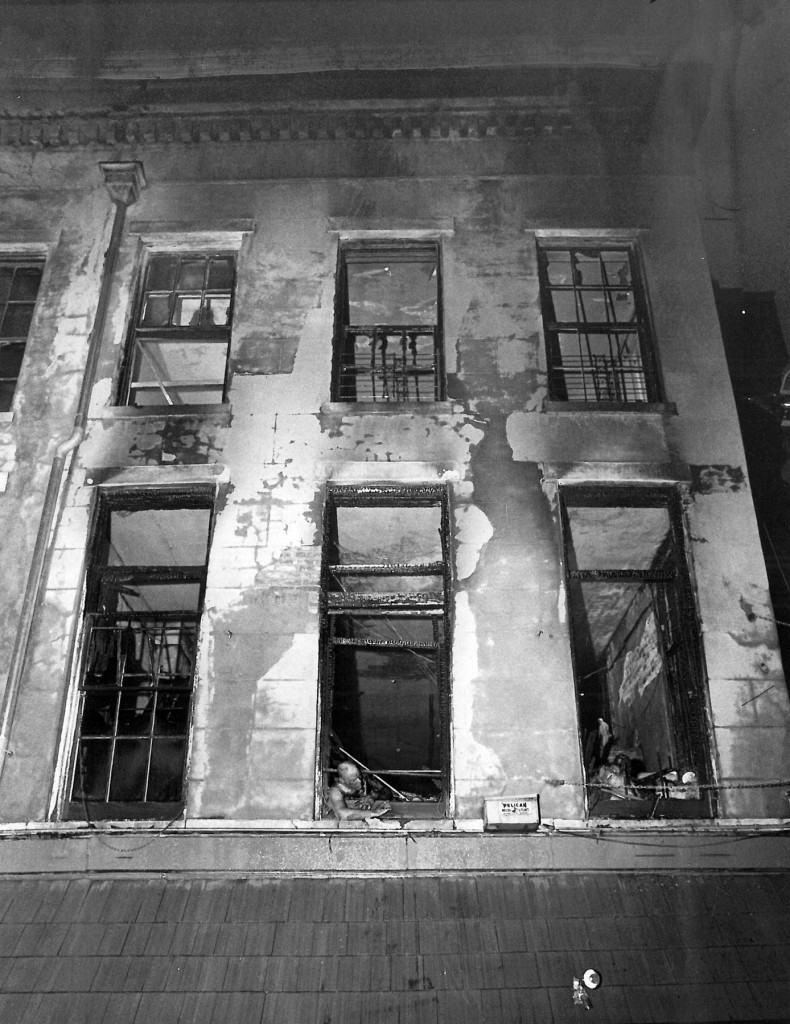 The aftermath of the Upstairs Lounge fire which claimed 29 lives. Reverend Larson’s charred body can be seen still left carelessly in the window. (Times-Picayune/Landov)

Though Dubose later bragged about committing the crime, he passed a lie detector test and was never charged with arson. One year later, he committed suicide. A second suspect, Roger Nunez, suffered a seizure while being questioned. He was taken to the hospital by officers where he eluded law enforcement after his release.

Within two days, the deadliest fire to hit New Orleans in nearly two centuries disappeared from the headlines. Officials and police seemed uninterested in solving the crime. As an ultimate act of disrespect, workers sifted through the charred remnants of Upstairs Lounge leaving the reverend’s body on display in the window for several hours. News reports undermined the importance of the incident at a “gay bar” while citizens joked on the streets about the victims being buried in “fruit jars.” More unidentified victims found piled together near a window. (Times-Picayune/Landov)

Thirteen bodies had been identified by the following day. Dental records were used to identify other victims. The three unidentified victims and unclaimed body of Ferris LeBlanc were buried in Holt Cemetery–a potter’s field. Churches throughout the city refused to allow services to be performed for the dead. St. Mark’s Community Center finally allowed a quiet service offered to a few hundred mourners on Sunday, July 1. Reverend Troy Perry, head of the MCC, flew to New Orleans from Los Angeles to give the sermon. His closing words spurred on the LGBT community:

“As long as one brother or sister in this world is oppressed, it is our problem. Names such as faggot, queer, fruit, and fairy are the language of the bully and the bigot—insensitive, stupid labels that will never put us down. Those human beings—our friends—who died so horribly, have dignity now. It does not matter what unknowledgeable people have stooped to say; our friends will always have respect because they are forever in our hearts. The memory of our love ones is so viable that I can almost feel their presence. If they could speak they would tell us to hold out heads up high.”

The case was closed by the fire marshall’s office in 1980 due to “a lack of leads.” and today it still remains officially unsolved. Twenty-five years after this horrific event, the city of New Orleans began its first attempts to make peace with those affected by the fire. A memorial bronze plaque set in brickwork adorns the sidewalk of Chartres Street near Iberville Street. The silent peace offering and apologies of governmental members may have soothed some of the memories of this forgotten tragedy, but local residents believe there is no peace to be found above the Jimani Lounge. Back in 2009, Aaron Ragan-Fore wrote an essay chronicling his night with a psychic at Jimani Lounge. And in 2012, during Season 8 of Ghost Hunters, TAPS made a trip to New Orleans to investigate the Jimani Lounge and the former site of Upstairs Lounge. The owner contacted the show after witnesses began reporting black apparitions resembling charred bodies, but even before then, some  staff members of the sports bar refused to set foot upstairs. The steel door leading to what once was the bar still bears scorch marks from the 1973 flames. Even the bravest of men feel a sense of unease on the stairs. Today, it’s a stopping point for NOLA’s Ghost City Tours.

Visitors can still catch pungent wafts of smoke in the spot the blaze began. Bloodcurdling screams and terrifying moans are occasionally reported coming from the second floor. Intense heat from phantom flames drifts along the steps. Explorers report feelings of panic and sense the empty area holds the spirits of the many fatalities so many years ago. For those who’ve paid a visit to this tragic place, it seems the building is still haunted by the ghosts of victims caught in an eternal struggle for their lives.

To learn more about the whole story of that tragic day, you can watch the new documentary Upstairs Inferno or read Johnny Townsend’s book, Let the Faggots Burn: The Upstairs Lounge Fire.