During an April 7, 2001 lecture at the 13th Annual Bigfoot Conference / Bigfoot EXPO 2001 in Newcomerstown, Ohio, cryptozoologist Loren Coleman lightheartedly remarked that he wondered if “10 percent of the Bigfoot population, matching the figures we have for Homo sapiens, might be gay.” That one statement was blasted out of proportion by the media with claims Loren stated, “Bigfoot is gay,” which was followed by an avalanche of hate mail directed toward him for ‘calling Bigfoot queer’. In all fairness, it was an interesting thought. With so many animals around the world observed having homosexual interaction and intercourse, why not? If the creature is in fact real, it’s certainly a valid question. 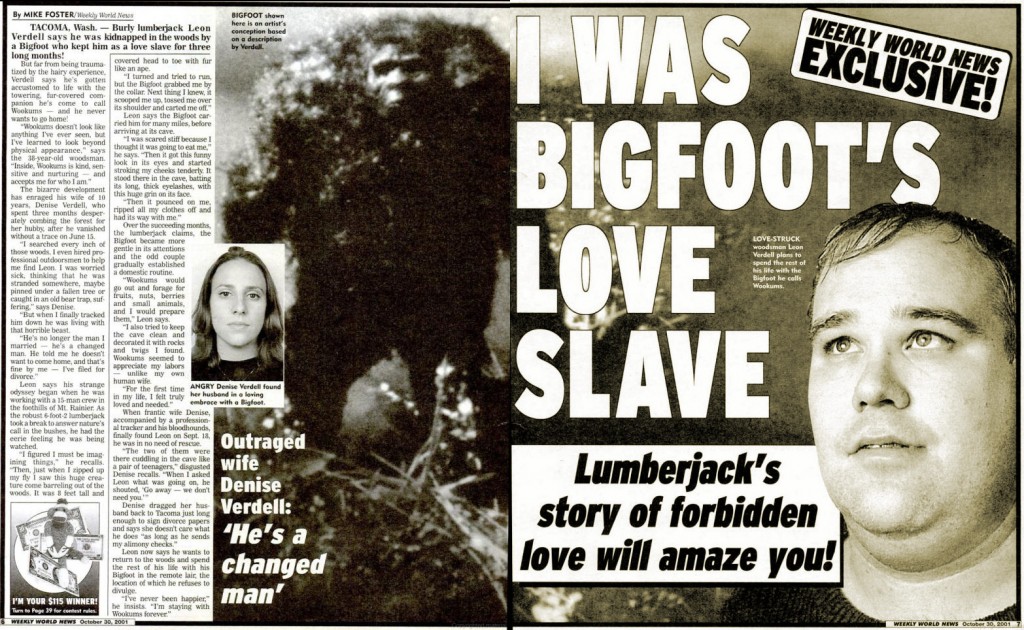 “Coleman figures ancient cultures used myths to explain factual events, which means that Iraq could be chock full of artifacts proving the existence of Bigfoot’s gay past.”

Enkidu was said to be a “wild man” (possibly a feral human, Bigfoot, or even a werewolf) in the Epic of Gilgamesh, raised by animals absent of human civilization. In her book When Heroes Love: The Ambiguity of Eros in the Stories of Gilgamesh and David, Susan Ackerman points out the sexual–and yes, even homoerotic–language in the text, but sees this as an ancient concept of gender roles rather than the contemporary view of same-sex relationships. But often, folklore and stories are based on at least a faint kernel of truth. Could there be a bisexual or homosexual “wild man” deep in Sumeria’s past which inspired the stories? Stone carving depicting Humbaba, the guardian of cedar forests, being killed by Gilgamesh and Enkidu. (Museum of Anatolian Civilizations)

In his book Bigfoot!: The True Story of Apes in America, Coleman states, “Frankly, the subject of sex and the Sasquatch is avoided. Never mentioned are Bigfoot bestiality, Sasquatch penises, and that more human males than human females have traditionally been kidnapped by Bigfoot.” (See Part III, Chapter 13: ‘Sex and the Single Sasquatch’.) There have been some reports of encounters involving some sexual overtones and he makes some references to the mysterious Jan Klement’s first-hand accounts of his interaction with a Sasquatch in his book The Creature: Personal Experiences with Bigfoot.

According to Klement, on one occasion he noticed “Kong” (as he had named the animal) sporting a difficult-to-conceal erection and being a bit fearful of what he might be capable of he yelled at the Sasquatch to get it away from him. A short while later he noticed something in the distance. ““As I approached the bottom of the hill I could see the cows on the pasture on the other hillside,” he wrote. “There was a commotion among the cows and I when I put the water jug down and walked over I could see Kong. He was mounted on a large Holstein cow and was shoving away.” Upon seeing such a sight (obviously it can’t be called “beastiality”… perhaps “inter-species relations” is better) his first thought was probably, “Better Bessie than me!” Sure, you can argue that we’re trying to place conventional human gender roles onto inhuman creatures, but studying any animal’s mating habits isn’t such a ridiculous idea. In fact, it’s part of understanding any animal’s whole story. It would be impossible for any creature to maintain a population without getting its groove on. Even Sasquatch must have more to its life than leaving footprints, screaming in the hills, gathering berries, devouring deer, and pooping in the woods. (Though it is worth pointing out that, according to neurologist Patrick McNamara, Ph. D., “Many male animals display erections during aggressive interactions with conspecifics in order to display dominance or to protect territory.”)

Normally, I’d leave such conversations to be entertained by out-and-proud individuals in the Bigfoot field such as Finding Bigfoot‘s biologist Ranae Holland or Ten Million Dollar Bigfoot Bounty contestant Rictor Riolo, but with questions like these left for punchlines, terribly-made YouTube videos, and comedy sketches, it does make you wonder if somewhere in some remote forest, there’s a same-sex Sasquatch couple snuggled up beneath the stars.

Related ItemsBigfootbooksFeaturesGayhomosexualityLoren ColemanSasquatchsexuality
← Previous Story Found Him! Watch in Horror as Bigfoot Hunters Pass Off a Human Corpse as a Sasquatch Body
Next Story → Case Closed: New Photo Proves “Roswell Alien” in the Kodachrome Slides is Definitely a Mummy, Maussan