The Terrifying Tale of the Fear Parasite: A Violent Ghost Afraid of Fire

The Fear Parasite: Recounting a Horrifying Childhood Encounter With a Violent Entity Afraid of Fire

If there’s anything scarier than a good ghost story, it’s a true one, the kind of harrowing tale that happened to the person telling it. After reading about my visibly painful brush with something unexplained in Ohio State Reformatory, Keb wrote in to share her own terrifying encounters with the “Fear Parasite”, a malevolent entity that tormented her as a child growing up in Southern California.  It’s a story that’s guaranteed to give you chills.

Years ago when I was a child, I lived in a small town called Los Banos. My family and I lived a couple of blocks from a local cemetery, and I regularly heard strange creakings and other things growing up in the house there. It wasn’t an old house by any means, and was part of a new subdivision. I remember being extremely frightened as a young child, thinking that the house never felt safe (the fact that I lived in an abusive household is besides the point).

As I got older, I learned to tune it out, or just ignore it completely. Sometime between ages 11 and 13, I started noticing strange things again.

I remember going downstairs for some reason, and looking out the window into the backyard. I thought I saw movement, but it was dark outside, so I couldn’t quite tell… and then I saw this strange, translucent, amorphous shape. It was kind of like a soap bubble with the way it seemed to trap rainbows within it, almost like an aurora, but it had this strange, milky-look to it. There were no discernible features, or limbs…it just sort of moved through the yard, and changed shape as it went. It was probably a little bigger than a soccer ball, an I watched as it floated by our fence. 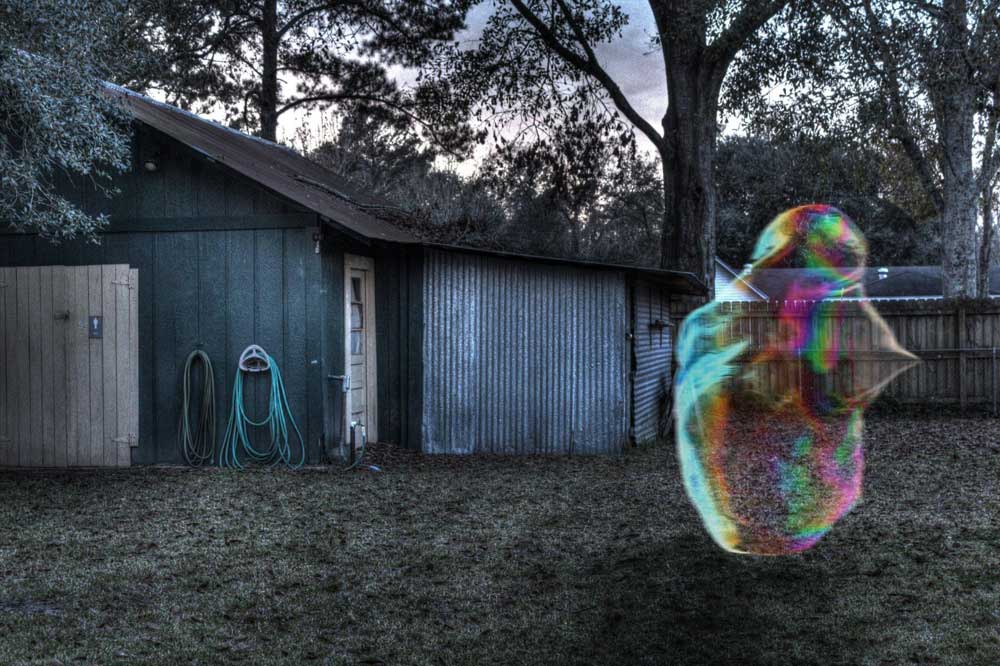 For some reason it terrified me. It was this strangely beautiful thing, but I couldn’t get over the idea that it felt evil.

This event seems to mark when I first started having encounters with “spirits” of one variety or another.

Sometime after that, I started hearing strange sounds outside at night. It was almost like hacking cough, but it sounded like it came from everywhere, and elicited feelings of terror. It was like its very essence was fear. Shortly after that it would feel like I couldn’t move. This always happened when I was already in bed, trying to sleep for the night. As time went on, it seemed like I was being pinned down by some unseen force. This was almost a nightly occurrence between the years 13 and 15. Sometimes I woke up with strange scratches. They started much like the welt-like scratches that you have in your photo. But as this became regular, sometimes I would wake up with scratches that were more like scratches, marks that were more like teeth. On rare occasions I woke up with what almost looked like strange animal bite-marks, with dried blood. Sometimes I was attacked on the stairs. I’d be walking up them, and suddenly be knocked over and pinned down, feeling the claws of something unknown on my back. I considered that some of my wounds might have been self inflicted somehow, or that maybe somehow I’d injured myself… but when you wake up in the morning and it looks like someone closed a miniature bear trap on your heel, how could that be self inflicted? I was a kid, and had nothing that could do something like that to myself. It wasn’t there when I went to bed, and was when I woke up. If I’d simply gone crazy and hurt myself with something, with as much dried blood as there was, and with how bad the wound was, there had to be some implement laying around. I looked. I never found one.

I was convinced for the longest time that it was demons, and that God was testing me. I turned to the Bible for answers, kept one in my nightstand at night, and tried doing things like reciting Bible verses that I’d heard in Sunday school, etc. That didn’t work either. It just made the attacks worse.

I don’t remember why I did it, but at some point I took my parents fireplace lighter, and started keeping it with me. When I felt its presence, I’d flip the lighter on. It seemed it didn’t like fire. As I studied mysticism later in life, I realized that this was because of what it symbolized, and that the essence of things is how they are symbolized. That’s a bit simplified, but this is a big topic to cover. I don’t know if it was a ghost, a demon, or what it was, but once I understood its nature, I was able to strip it of its power by starving it. The attacks reached the worst point they ever had. This thing needed me to fear it. It used its remaining power to try to attack me during the daylight- the one time I had previously felt safe. At one point I was outside lounging in the sun by the pool, and it tried to chuck me into it.

It started influencing people around me, showing me its power, and why it was something to be feared (this only really happened once, where my parents were drained and fell asleep in the middle of the day while it attacked and I tried unsuccessfully to wake them up).

It did whatever it could to trip me up, to startle me, to make me afraid so that my fear would feed it. But over time, its energy depleted from these outbursts and it was no longer even able to mark me.

I don’t know if it died, or just left. By the point that I had discovered that it was afraid of fire, I had started studying western occult philosophy, and mysticism. Some people might have called me a witch if they knew. But honestly, I was just a girl looking for answers, and learning how to develop my will, ego (which had been crushed from years of parental abuse) and focus enough to dominate the thing that was trying to dominate me.

The Tibetans have a word for an entity that is formed from your thoughts and emotions. They call it a Tulpa. Other people call them thought-forms. While I don’t know for certain if that is what this was, or if it was just a spirit that attached itself to me as a parasite; I do know that this thing existed, and that it haunted me, and hurt me for several years until I was able to identify its nature as a parasite and weaken it.

All of this happened before everyone had a phone with a camera. I wrote things down, but I had no other way to document them at the time. I assume that as time goes on, there will be more and more people showing photographic evidence of their wounds and terrifying experiences involving them. If wounds look possibly self inflicted, but people are claiming a supernatural cause…please don’t dismiss them outright. It could be that they, like myself, encountered something that had built up enough “energy” to manifest in a more physical, and terrifying way.

Do you have a true story about a paranormal encounter that you want to share with the world? Email us! We love hearing true tales of the strange and unexplained, and we just might feature yours right here.