Ohio's Bible Walk is The Largest and Scariest Wax Museum in the State. Oh Yeah, and it's Haunted

We Visited Mansfield, Ohio’s Haunted Bible Walk, The Largest (and Scariest) Wax Museum in the State Just down the street from the Ohio State Reformatory, one of the Buckeye State’s most notoriously haunted prisons, sits a building that houses something scarier than ghosts could ever be: a Christian-themed wax museum filled with children on the verge of sacrifice, werewolves, and gnarly Biblical scenes to rival any heavy metal album cover. Oh yeah, and it’s supposed to be haunted. So naturally, we had to investigate it for ourselves.

As you head towards Mansfield, Ohio, it’s hard not to notice the prominent, brightly-colored billboards advertising the Bible Walk, but it’s generally the kind of billboard that gets lost among other, far more extreme, roadside religious statements so popular in the Midwest. In fact, Dana and I hadn’t even planned on visiting the Bible Walk until it was suggested to us during a visit to the Ohio State Reformatory.

“You like weird stuff, right?” our tour guide asked. “You’ve got to check out the Bible Walk. It’s the largest wax museum in the state, and man, it’s creepy.”

That’s all I needed to hear. As we finished up our guided tour of Mansfield Reformatory, we asked a few other adventurous prison-perusers if they’d ever been to the Bible Walk. Much to our delight, they not only backed up our guide’s suggestion, they dropped an interesting tidbit: rumor has it, the massive Biblical wax museum wasn’t just weird… it was supposedly haunted to boot. 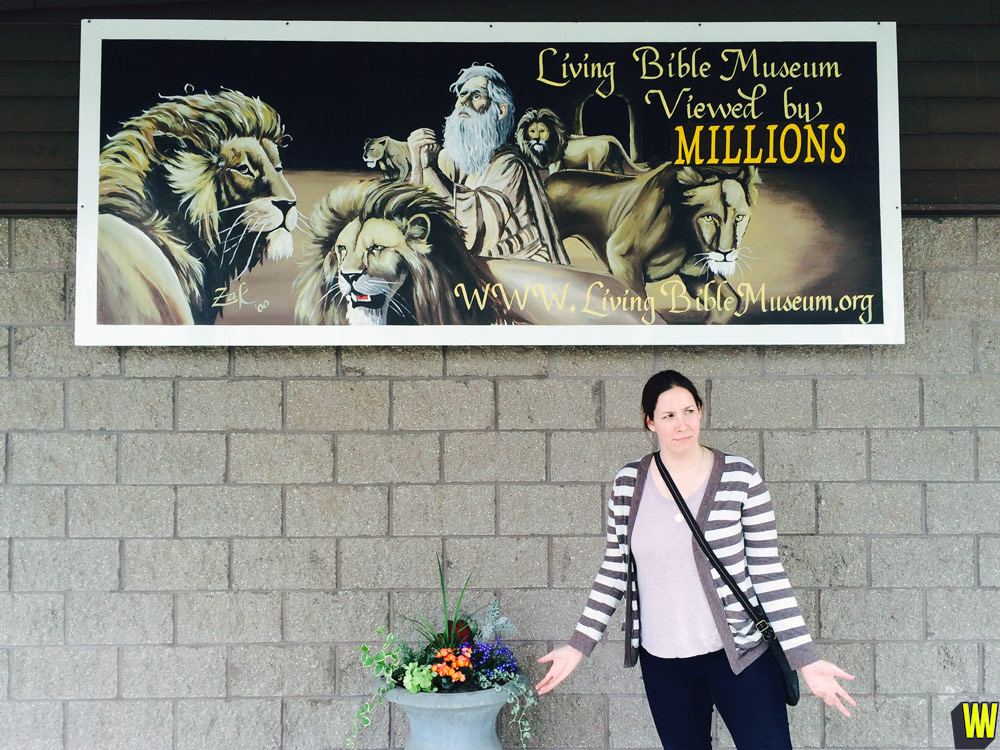 Seeing as it was about an hour until closing time, we hopped in the car and made our way down the street and pulled into an empty church parking lot, wondering if we were in the right place. A lit sign at the end of the parking lot assured us that this was, indeed, “The Living Bible Museum viewed by MILLIONS”!

As we made our way into the lobby, I couldn’t help but think I was standing in a regular church. It smelled like a church, it was as quiet as a church, and it even looked like a church, aside from the giant wax figure of Jesus at the entrance.

An extremely nice, and extremely happy man rushed over from behind the counter to greet us and tell us a bit about the museum. When I mentioned how weird it was that the largest wax museum in the state was located in the middle of nowhere, he dropped a bomb on me. Although it boasted over 300 wax figures in over 70 religious scenes, The Bible Walk most definitely was the largest wax museum in the state, but it could have laid claim to that title with just one wax figure. You see, it’s the only wax museum in Ohio. Our guide informed us that the building actually houses four museums. There’s the Old and New Testaments, the Heart of the Reformation, and the Museum of the Christian Martyrs. With only an hour until closing time, we could only view one, so we needed to choose wisely. New Testament? Not hardcore enough. Heart of the Reformation? Too boring. I suggested that the Museum of Christian Martyrs might be the most fun, but was disappointed to hear that was not, in fact, wax depictions of the actual martyrdom. This left us with the Old Testament, an hour long tour through the gnarliest stories outside of Revelations. Once we paid our $6 entry fee, the tour guide informed us that they liked to welcome visitors by joining hands in prayer, an experience that’s more than a little bizarre for anyone who isn’t particularly religious. After blessing our visit and asking God to touch us, the guide led us into a dimly lit, hallway with walls painted pitch black. “The tour is self-guided, but I promise, it’s idiot proof,” he said. “You just hit the big white button and everything starts. It’s impossible to do it wrong.”

With that, he shut the door, leaving Dana and I alone in a dark corridor of an eerily quiet church. None of this was what I expected to see. I figured we’d we’d walk into a large, dusty museum filled with life-size figures, make a loop, look for ghosts, get bored, and leave. But now we were trapped in a dark maze, a little wigged out from a prayer bum-rush, waiting to push a big white button. It felt like we were subjects in a strange experiment. “I’m a little scared,” Dana said as she slowly reached for the button.

Seconds after hearing the click, a stream of light burst from the ceiling and the booming words of God filled the room.

“In the beginning God created the Heavens and the Earth….”

Unfortunately, the first diorama is easily one of the worst on the tour, so as the narration continued to give us the history of a six thousand year old planet as told by an almighty God with a southern accent (every piece of voice work was recorded by members of the church congregation), I turned to Dana and asked, “you’ve heard all this already, right?” A nod of agreement and we were already on our way to the second display, eager to get to the “good stuff”.

As I fumbled around in the dark looking for the big white button, the Supreme Ruler of the Universe ran through the finer points of the third day of Creation with a distinct twang in his voice. Finally, as my hand found the smooth plastic button, I breathed a sigh of relief and pressed until I heard a satisfying click. Except nothing happened. No matter how many times I pressed the giant white button, God just kept droning on about birds, and fish, and plans, and seeing that it was all good. It had become apparent that the game was rigged. In order to assure that everyone received the full message of the Bible, each animatronic diorama had to completely finish its run before it was even possible to start the next on. The Bible Walk wasn’t just the largest wax museum in Ohio – it was a purgatory simulator.

When God finally decided we’d had enough, the floodlights kicked off, and we were able to move along to the Garden of Eden, where Adam and Eve’s conveniently leaf-covered naughty parts were shielded from the pervy eyes of a talking snake. No big surprises here, but as we continued to move along the dark, twisting corridors, we could see the eyes of the tour guides following us through the cracks in the doors as the tableaus got progressively more violent and shocking. Now, I’m not a very religious person, but I grew up in a very religious household – my dad was a Baptist minister, after all – so I’m pretty comfortable around even the most devout Christians. I’ve attended more baptisms, deliverances, and shitty church potluck dinners than you could imagine. But this… this was fucking weird.

As Lot’s wife slowly turns to show that she’s been turned to a pillar or salt, or King Solomon raises a sword to a baby dangling by its leg, the entire display took on a vibe I can only describe as “Christian Horror”. It’s like the operator of an 80s-era haunted house suddenly found Jesus and hurriedly repurposed his bloody scenes into Bible verses come to life. “Esau was covered in hair? Hey, I’ve got a werewolf that will work just fine!”

As it turns out, that deduction wasn’t too far from the truth. A little light reading in the lobby would later inform us that the Bible Walk’s 300+ figures were actually purchased from a wax museum out of New York, which explains why Elizabeth Taylor and Clark Gable were hanging out in front of Solomon’s Temple. The work they had done to transform the finest classic actors into religious figures was impressive. As we continued our journey through the Bible, we saw Jonah get spit up by a giant, plush whale, watched the giant stone roll away from Jesus’ tomb, and witnessed watched Moses part the Red Sea (complete with a mist blown into our faces by an industrial fan), but the greatest diorama, hands down, was Moses standing on a mountain clutching two stone tablets. As lightning bolts cracked through the blood-red sky, Dana remarked that it was one of the greatest metal album covers she’s ever seen.

This place would be amazing if you were stoned. It wasn’t long before we’d reached Jesus, who heralded our exit from the Old Testament. An hour had gone by, but much like one of the Biblical days of creation, it felt like a thousand years. As the searing light of day blinded us upon our exit from the dark corridors of the Bible Walk, we walked into a small room with a big cross and a kneeling pad. If the commanding voice of Southern God and the sight of Burt Reynolds preparing to saw a baby in half had overwhelmed you with the urge to repent your sins, this is where you’d do it. We were both feeling particularly sin-free, so we we sauntered on by, but as we headed toward the front door, the lone guide rushed to us, eager to hear how our Bible Walk had gone.

“I really hope you were touched in there, did you both enjoy it?”

I channeled my best Sunday School school teacher, and after mentioning what a delightful and inventive museum they were running, I asked our beaming guide a question of my own.

“So, I heard a rumor that there might be a ghost or two wandering the building. I can only imagine how spooky it must be in here after dark. Do you think  that the Bible Walk is haunted?”

He cocked his head ever-so-slightly, reached out and put his hand on my shoulder, and gently said,”Brother, the only ghost wandering the Bible Walk is the Holy Ghost.”

Have you been on the Bible Walk? More importantly, have you seen any ghosts on the Bible Walk? Do you know of any other weird and underrated museums we should check out? We want to hear from you! Drop us a line on Facebook, tweet to us @WeirdHQ, or leave a message in the comments below. Amen.

Related Itemsbible walkchristianityFeaturedFeatureshauntedJesusliving bible museumMansfieldmiraclenewsflashOhioreligioussupernatural
← Previous Story When Ghosts Attack: How Getting Scratched by an Invisible Monster Changed My Opinions on the Paranormal
Next Story → Crowd-Sourcing Paranormal Investigation: The Case of the Spooky “Burlington Boogeyman” Trail Camera Photograph