Home / Features / Ghost Sex and The Women Who Love It: A Brief History of Spectrophilia from Eve to Ke$ha

The idea of steamy hot sex with supernatural beings has been around as long as people have been writing things down, it seems – with the mention of erotic encounters with devils dating back to ancient Mesopotamia. (6) The mating of humans with ethereal creatures goes back, in Judeo-Christian faiths, to the idea that Eve mated with a serpent to produce Cain. There are some modern white supremacists who employ this Bible story in validating their antisemitism, citing that since Jews are the sons of Cain, and Cain was the product of a Serpent Seed, therefore the Jewish race is forever tainted as evil. (5)

In another bizarre, early Christian story, the Bible alludes to a race of giants, as described in the books of Genesis and Ezekiel. “The Nephilim” were said to be a result of the coupling of “the sons of God” and “the daughters of men”. (4) The idea of “Gods” changed to “devils”, when Gregory of Nyssa (300 AD) touched on the subject of the formation of demons, postulating that women who mated with demons produced more demons. (7) The sin of copulating with demons gained momentum in the 1400’s, when an eccentric German Catholic priest named Heinrich Kramer set out to write a convincing tome on the lifestyle, identification of, and suggested punishments of, witches. Up until that point, belief in witchcraft had been seen by the church as a throwback to more primitive times, and that those who believed such a thing existed “had been seduced by the Devil in dreams and visions into old pagan errors”. (1,2) Kramer was tenacious in his beliefs, and a self-appointed inquisitor – which got him “thrown out” of the city of Innsbruck, and denounced by his local bishop as a “senile old man”. (1) Indeed, his ideas were, by any era’s standards, bizarre. In attempts to sour the male parishioners’ view of accused witches in the community, he told stories of tainted hags collecting dozens of chopped off penises, which they would collect in “a bird’s nest, or shut them up in a box, where they move themselves like living members and eat oats and corn.” (2, p.303) Kramer’s life’s work was published, entitled “Malleus Maleficarum (aka The Hammer of the Witches/Der Hexenhammer )”, and eventually the idea of trifling and fornicating witches living among the good people of Medieval Germany took hold, and spread to lands near and far. According to Kramer’s guide to witchcraft, and others like it (such as Frencesco Maria Guazzo’s ‘Compendium Maleficarum’, or ‘Book of Witches’, written around 1600) (3), witches are made by a woman being inseminated by a demon, or incubus. “Malleus Maleficarum” is slanted heavily toward the idea that women were usually the villains in incidences of witchcraft, and the book implies guilt in the title itself by employing the feminine Latin form vs. the more grammatically appropriate masculine form. By having a weaker belief system, and a more lascivious libido, Kramer reasoned, women were largely to blame for carnal sin. He stopped “just short” of stating that demons gave women more intense orgasms, and thus were optimal as sexual partners. (1) In the wake of the era of witch trials, the idea of the incubus still played well to a sexually repressed European public during the Romantic Era, and was represented famously in legendary paintings by John Henry Fuseli and William Blake, among others. The pure deviousness of delicious and wrong deviant boning in the dead of night piqued the imagination of artists of the time, and images of helpless maidens being ravaged by awful fanged monsters were projected, flickering and terrifying, at the then-popular phantasmagoria shows. (8) These artists laid groundwork for later gothic horror masterpieces such as Bram Stoker’s “Dracula” (written in 1897).

Today, as outlandish as it may seem to most, there is still a strongly held fascination with the idea of sexual assault via phantom. Incubi (male demons) and succubi (female demons) are not limited, by any means, to Judeo-Christian mythology, and have been described in cultures worldwide to this day – often with the idea of incubus being bisexual. (6) In the modern climate of “Ghost Hunter” television programs, it is not a stretch to see how the idea of the Incubus has given way to “getting fucked by a ghost”. Although modern medicine explains away the phenomenon as an unsavory side effect of Sleep Paralysis, (9) many people still consider these encounters terrifyingly real.

“The Spiritual Science Research Foundation”, a group led by His Holiness Dr. Jayant Balaji Athavale of Mumbai, India (described as, ‘by profession a Consultant Clinical Hypnotherapist’) provides support to those who have suffered “sexual assault by a ghost”. A typical ghost rape is described, and is illustrated by one of the group’s “clairvoyant artists” : “In this case a subtle-sorcerer (māntrik), a higher ghost is sitting astride on the woman and transmitting his black energy on her. He is looking at her breasts with lustful eyes and fondling her. The woman went into a state of deep sleep and then the subtle-sorcerer raped her. The environment was saturated with pressure of black energy and sexual thoughts. This explained the unexplained drained out feeling and that of soreness in the loins experienced by the woman since a long time.” An illustration of a naked male figure, which appears to be covered in soot and surrounded by a cloud of filth, a’la Pig Pen from “Peanuts”, straddles the helpless, possibly unconscious, female victim. A ring of red words that say “Om Hum Hanumate Namahaa” surround the illustration on four sides. “The reason we have employed a protective border is to counteract any harmful subtle-vibrations emitted by the drawings based on subtle-knowledge or the text about negative energies. As a result our readers are protected from these subtle negative vibrations.” (10)

In 2011, a Mennonite community in Bolivia was terrorized with a string of “ghost rapes”. Children as young as 3, up to and including a 65-year-old woman, reported nocturnal violations after waking up with a crushing headache, semen stains on their bedding, bits of rope scattered around/on them, and pelvic pain. Over four years time, 130 women reported being assaulted in their sleep. At first, the leaders of the puritanical old-order Christian community dismissed the stories, deciding the women were just making up fanciful stories (because all women when left unchecked, are prone to being dirty, lying whores, of course). When the assaults continued, the church elders decided that God was putting a scourge on the community, and later amended the explanation to state that demons were systematically raping all the women. For four years the rapes continued, until it was discovered that a group of men in the community had concocted a spray from medicines used to anesthetize cattle, and were fumigating entire families so that they could sneak in and rape the women at night. (11) 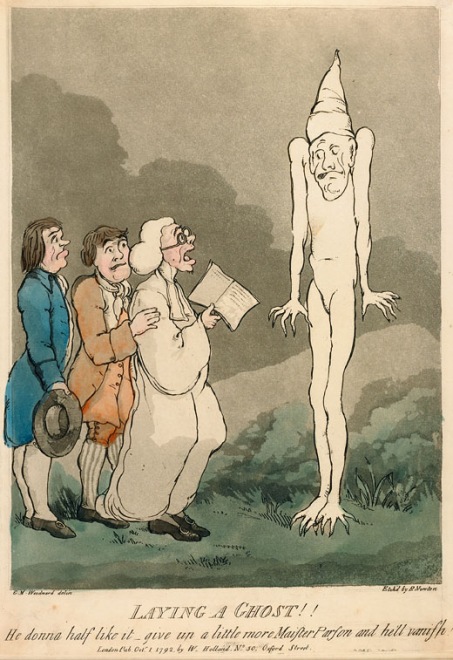 Segueing from horrible tragedy en masse to the laughably theatrical arena of Hollywood: performer Ke$ha claims that her song “Supernatural” is about her erotic experiences with a ghost. (12) Similarly, another attractive young entertainer recently stepped forward with her story. Throwing any thoughts of obviously fishy marketing tactics to the winds, one of the actresses who appeared in “Paranormal Activity 2” came forward to confess her torrid love affair with a spectre. A top expert in “spectrophilia”, Patti Negri, counselled actress Natasha Blasick after her red-hot love affair with a shapeless entity. The Russian born actress described, in detail, the first time she was attacked by a ghost – as what could only be categorized as forcible rape. However, she happened to like it so much, that she said she very much enjoyed the second time it happened, about a month later. She expressed hope that it will happen again. (13)

I’ll wrap up this hormone-fueled walk through the torrid history of ghost sex with the melancholy sentiments of one spectrophilia enthusiast that I found on a forum wall: “We were hoping to get some more specific tips on how to pick up the undead from this new article at ‘Lust Magazine’, but alas, the advice is maddeningly oblique: ‘For those seeking sexual union with a ghost, the only solution is to seek out haunted mansions and hope for the best…'”