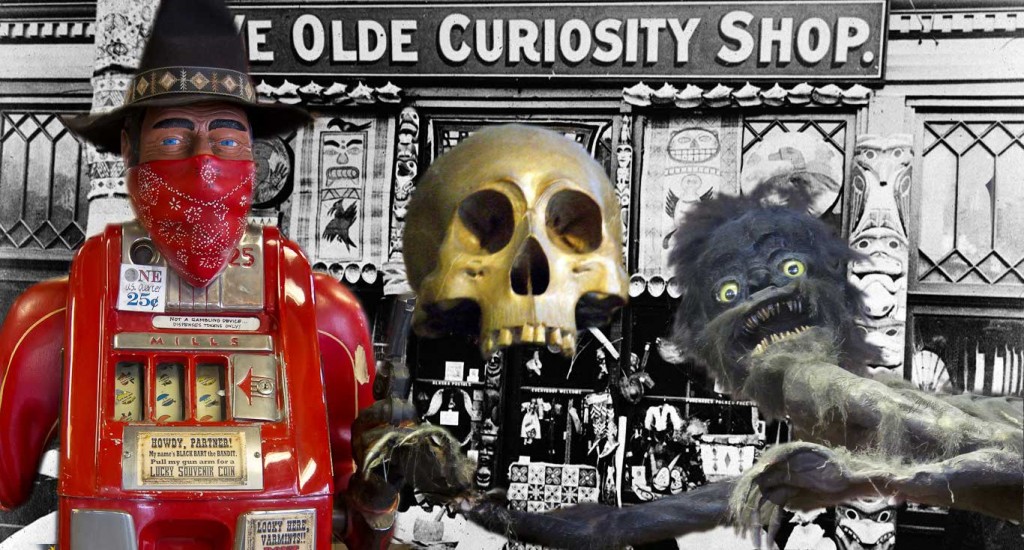 If you ever find yourself in Seattle, leave your umbrella at the hotel. Only tourists think they need an umbrella to withstand a little drizzle in the Emerald City. This is a city for hardy folks, bearded men, and what the rest of the country deems to be too “weird” for their tastes.

And far from the dizzying heights of the Space Needle, standing silently a few blocks down the steep streets from Pike Place Market, you can find a true hidden gem of weirdness. If you love oddities, this is one place you can’t miss out on visiting. But be warned: you never know what you might find inside… and you might need to set aside several hours just to see all the strange, creepy, and mysterious objects that are hung, mounted, and displayed at Ye Olde Curiosity Shop on Pier 54.

From the street, this place looks like any other storefront along the harbor. But from the moment you open those old wooden doors, you realize that this is much more than a unique store; it’s a whole museum of native artifacts, anomalistic animals, mysterious relics, and antiques with fascinating stories to tell. Have you ever seen a taxidermied calf with two heads? How about a real mummified murder victim? Or a penny arcade game that plays a Charlie Chaplin silent film? Imagine someone squeezing the Mütter Museum, Ripley’s Museum, a natural history museum, and an antique shop all into a decent-sized gift shop and you’ll have an idea of what it’s like inside. Some of the wonders inside Ye Olde Curiosity Shop.

Donning my best bowler hat, I strolled inside during the first rainy week of November to explore this must-see attraction. After two whole hours, I barely grazed the surface of the wonders held within its walls. Everywhere you look—the ceiling, walls, isles, counters, and rafters—you will find something truly unique, often with a hand-printed sign next to it telling you its strange tale. Back in the far left corner, greeting me with a slice of melt-in-your-mouth fudge and a warm smile, I met the lovely “curio wrangler”, Peg Boettcher.

I can’t resist a golden opportunity. And thankfully, Peg took some time out of her busy schedule to answer some of my many questions. It’s nice to see a shop full of oddities built by a fellow Ohioan! What can you tell me about the creator?

Joseph Edward Standley was born in Steubenville in 1854, and spent his boyhood picking up arrowheads along the Ohio River. The story goes that he won a book about the wonders of nature for having the cleanest desk in the third grade, and it really sparked his interest in natural oddities.  When he was older, he combed the nearby caves in West Virginia for Native American artifacts. He went west to Denver with his family in the 1870s and opened a small exotic grocery store (canned rare fruits and so forth, sort of like the Trader Joe’s of his day).  After a while his collection of oddities began to crowd out the regular merchandise, so when he moved to the Seattle waterfront in the 1890s to benefit from the Yukon Gold Rush traffic, he had a head start on stocking the shelves of “The Curio.” Everyone called him “Daddy” Standley, and he was quite the character. Part huckster, part businessman, part armchair explorer, he was friends with actual Arctic explorers, fishermen, celebrities (like Robert Ripley and Queen Marie of Rumania) and museum directors. The heart of our collection of shrunken heads was purchased from Professor George Heye, who was closely connected with the Smithsonian Institute, for instance. “Daddy” worked in the shop till his death at the age of 86 in 1940. His familiar smoking cap, black-rimmed glasses and small cigar (“After Eight” brand) were sorely missed.

How long have you worked at the shop? What has changed or been added since you started?

I have worked in the shop for 9 1/2 years. We’ve added a bunch of things to the collection in that time, as you can imagine. The greatest number to come at once was from the world-famous Walter Potter Museum that was auctioned off in Cornwall in 2003. We won a Cape Buffalo mounted head, a village carved from cork, a four-legged chicken, and a giant pair of ophthalmologist’s glasses, etc. Walter Potter was a Victorian taxidermist of some renown. The environment for curios is not at all ideal. The viaduct’s vibration, soot, and carbon monoxide, combined with our location over salt water, our doors always being open to the air, and the primitive preservation techniques (someone stapled a rare Sumatran tiger skin to the wall, for instance) of a bygone day, make for a sort of nightmare for preservationists, actually.

I can imagine! Is keeping a catalog of all these items as difficult as I would think? It’s hard to find a corner—or ceiling space—that isn’t covered in stuff!

There isn’t currently a catalog per se, but I have been working on one with the help of University of Washington Museology Certificate students. I am a graduate of the certificate program myself, so it’s a pleasure to put some of those skills to work for the shop. We are still missing a giant clamshell, and a rare stuffed Hawksbill turtle (both now endangered and unobtainable). We suspect that the thieves were unable to heft the clamshell very far, and we have a witness to the turtle going into the drink [i.e. Puget Sound] when the thieves realized they couldn’t sell it. The fact that someone came into the store with a stolen object in an attempt to sell it to us shows the level of “intelligence” they displayed!

What was the first oddity purchased originally, if it still exists or there’s a record of it?

I think some of the arrowheads we have on display were collected by J.E. Standley in the 1860s, but they aren’t identified as such. We have the little ivory-headed cane that he used as a tiny boy—the height of fashion for a Civil War lad—and the spectacles his grandmother wore. Of the actual oddities, the stuffed shark appears in photos from about 1910, the Mermaid arrived in the 1920s and the shrunken heads in the late 1930s.

Has there been any unusual activity in the shop after acquiring an item? Any cursed objects or haunted relics?

We get asked this question a lot! The answer is no. That said, the building itself, which was built around 1901, has been vetted by AGHOST, a local amateur paranormal research group, and their equipment detected the ghostly presence of a worker who hanged himself in the well of the freight elevator long ago. (I hasten to add that there is no documentation to back up the claim.)  And some of our longtime employees have definitely seen people upstairs who weren’t there, if you know what I mean.

Are you always acquiring new items for display? Where do you find your oddities?

Items come to us not often, but regularly, and by all means imaginable. My favorites are those that arrived in the mail with no return address, which includes one of our shrunken heads, as well as our two-headed lamb mount. Sylvester the mummy came to us from the attic of an elderly local widow who was desperate to get rid of him so she could move to a retirement community. Our most recent arrival was “Sweetums,” a Nubian vulture mount, which was donated to us by a gentleman who had gotten it from his alma mater while a student, and who several decades later had tired of seeing Sweetums glaring at him whenever he wanted to get a coat out of the front closet. What is your favorite item on display?

The four-legged chicken, hands down! Not only was she preserved by the famous Walter Potter, but she lived a long and happy chicken life before she expired. She laid eggs, strutted around the barnyard, and died at the ripe old hen age of seven. So many freak animals die at birth or shortly thereafter, their pathetic little bodies preserved in alcohol as a sort of memento mori, never having had the chance to experience life. But our four-legged hen thrived, despite the challenges presented to her… an inspiration to us all!

If you could add anything at all to the collection, what would it be and why?

Not too long ago, a taxidermist of many years’ standing was selling off his collection of African mounts for a song. We could have picked up a zebra, a gazelle and an elephant’s head, among several other items for next to nothing! I still regret that we didn’t do it… can you imagine a full size African elephant looming over us? A postcard depicting the interior a century ago.

Is there anything else you want future visitors to know about Ye Olde Curiosity Shop?

This business is over 114 years old and has remained in the same family—and in the same location—for all that time. It has occupied a place on the Seattle waterfront since before ferries carried cars, before Pike Place Market opened, before Ivar’s Acres of Clams served its first bowl of chowder, before the art museum opened, before the Space Needle went up. I meet people on a daily basis who tell me they last visited in 1959; and they are bringing in their great-great grandkids to have a look at Sylvester. Know how rare that is?

At least as rare as a painting on the head of a pin.

To learn more about Ye Olde Curiosity Shop, check out their website: www.yeoldecuriosityshop.com. You can view some of the many oddities online or shop the store from the comfort of your own home. But the best way to really get the full experience is to head down to Pier 54 on Alaskan Way and see the place for yourself. If you see Peg, say hello and thank her for her wonderful work putting up signs identifying so many of the things you’ve just seen and uncovering so many forgotten and misidentified items for our enjoyment. But expect to leave with some kind of souvenir, whether it’s a magnet or a shirt or a half pound of pumpkin pie fudge. Or even a stuffed piranha.