Northeast Ohio is rife with urban legends and spooky stories. I already touched briefly on the “CryBaby Bridges” in an article here quite some time ago, but that’s just the tip of the paranormal iceberg. Cults, carnies, and killers live on in nightmarish works of fiction passed along through high school halls. And one of these ghastly tales is all about “The House of Seven Barns”. 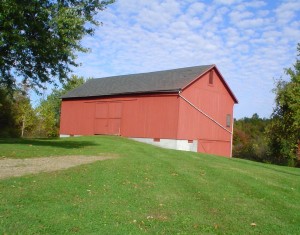 The popular version of the story sounds straight out of a Hollywood horror flick from the Seventies: In a rural farmhouse surrounded by seven barns down in the Cuyahoga Valley, a farmer went crazy and killed his family before going out to the barn where he killed his livestock before killing himself. Naturally, the farmer’s ghost still haunts the site. Some say he reenacts the crime, while others claim he’ll kill you if he finds you lurking around. I grew up hearing the tale, and it was always associated with one particular site known by locals as Top O’ the World.

Located within Hampton Hills Metropark, the house itself was once located at 1285 Bath Road. It was originally built by the Hart family in the first half of the 19th Century. In 1967, it was donated to the Summit County Metroparks by then-owners Rhea and E. Reginald Adam. It was a creepy, dilapidated structure when I used to visit it back in my early ghosthunting days. The farmhouse and adjacent smokehouse were torn down in 2003, much to my disappointment. The lilac bush beside it still blooms every spring, but many people visit it to see the infamous big red barn.

Now, anyone who visits Top O’ the World will notice one slight problem with the story: there is only one barn. People dismiss it by saying the others were razed years ago or they’re spread out across the whole valley. But this mistake in legend meeting reality isn’t caused by a poor telling of a story; the real reason is that the legend itself moved over time. The Hammond-Cranz Homestead found along Ira Road… the real “House of Seven Barns”.

While the story was only shifted a few miles, the older telling of the story was located at the Hammond-Cranz Homestead on Ira Road, just down the street from Hale Farm & Village. There, you will see the missing puzzle piece: seven barns of differing sizes, scattered across what was once the land originally owned by the Hammond Brothers. Their white house still stands empty in the middle of it all, at a bend in the road. Why exactly the story moved about four miles between generations is still unclear, but the Hammond-Cranz House has its own ghostly speculations to it, now separated from the original story. The reason it’s vacant is said to be because no one will rent it out for more than a month or so before packing up and leaving.

But getting back to the Seven Barns legend, I’ve always said that behind every good ghostly legend there’s some true story on which it’s based. So, did Hammond go mad and murder his family? Absolutely not; there haven’t been any murders—or mass murders—at the old homestead. It has a long history, but nothing grizzly. But just as the Legend of the Seven Barns migrated from its original site, so did the bloody story attached to it, it seems. October 29, 1936 newspaper article on the Slabaugh murders in Cuyahoga Falls.

On the night of October 27, 1936, no one in Cuyahoga Falls was aware of a tragedy taking place on the farm of William Slabaugh. A draftsman by trade at a rubber factory and a veteran of World War I, Slabaugh seemed outwardly normal and there was nothing unusual happening at home, aside from William visiting his doctor that week complaining of a persistent, severe headache. But on that particular night, something went horribly wrong. And no one in the house would live to see the sunrise.

The following day, the lights were on in several rooms when relatives arrived, but no one answered the door. A neighbor gave them a spare key and, upon entering the house, a horrible scene revealed itself. Mrs. Slabaugh was in the kitchen with a bullet wound to the head and an unfinished cup of cocoa on the table. Upstairs, the bodies of ten-year-old Marilyn and 12-year-old William, Jr. were still in their beds also shot in their heads. At the foot of his son’s bed was William Slabaugh; after killing his whole family, William had placed a 45 caliber rifle in his mouth and pulled the trigger. Authorities blamed it on “temporary insanity”, but what actually happened will probably never be known.

Is this absolute proof that the Seven Barns legend is based on this quite similar murder-suicide? I can’t say for certain. But the events are eerily similar, even if William didn’t kill himself in a barn. Urban legends and local folklore are often twisted to fit their surroundings. But for me, at least, the story appears to hit on all the important points of the crime. Top O’ the World is, after all, within the city limits of Cuyahoga Falls. A crime like this is likely to haunt the families who remembered it. Though long forgotten by Falls residents, such a gory tale is bound to live on, twisted and changed in each retelling like a game of Telephone.