In November 1868, a 10-foot-tall mummified man crafted out of stone was planted on William Newell’s farm near Cardiff, New York. It was uncovered almost a year later on October 16 by workers digging a new well. This now-infamous hoax known as the Cardiff Giant perpetrated by tobacco dealer George Hull sprang out of his disbelief in scriptural accounts that “there were giants in the earth” thousands of years ago. But belief in ancient giants hasn’t vanished completely in our modern world. Many accounts are still touted as fact, but in reality the evidence is merely the product of modern-day hoaxers and misidentified artifacts.

You can find websites claiming photographic proof of giant skeletons unearthed around the world. One Creationist museum even has an enormous human femur on display. There has been a lot of buzz explaining these objects as proof of a race referred to as the Nephilim Giants as mentioned in the Old Testament, but if you’re looking for concrete evidence, all of these things fall flat when examined closely.

At the Mount Blanco Fossil Museum, a 47” femur bone is on display from an archaeological site in Turkey. Well, not exactly. It’s the handiwork of the museum’s curator, fossil restorationist Joe Taylor, who was “commissioned to this anatomically correct, and to scale, human femur.” That’s right: the real giant femur claimed to have been discovered is just a personal account in a letter. As for photos circulating of a man holding a similar femur bone, you can buy your own exact replica from Taylor for the special price of $450.

But wait, you say, I’ve seen photographs of whole skeletons at archaeological sites! You very well might have, and there are quite a few floating around in cyberspace. But there’s just one problem with them: they’re not real.

Let’s take a look at one of the most popular images. You can find it on many websites mentioning the existence of giants. This photo has been around for almost 10 years now. It was an entry for the 2002 Archaeological Anomalies contest on the website Worth1000. So, what would the photograph look like before it was photoshopped? It was a Cornell University dig site in New York State where the bones of a mastodon were found. 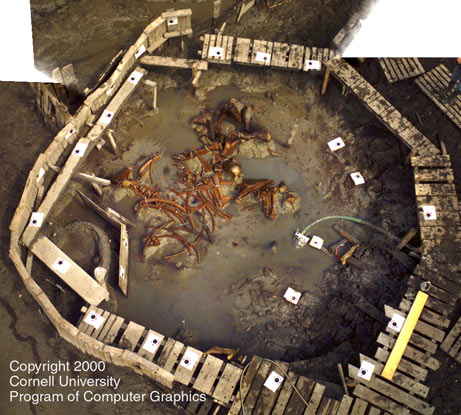 Here is another popular image showing excavation of an enormous human skeleton. Beside it is a 1993 photograph from a dinosaur dig in Niger, Africa, by the University of Chicago. Let’s see if you can spot the difference. So, does this mean that giants of the past are all legends and myths? Not necessarily. A few dozen articles from Ohio do exist, reporting the discovery of “giant” skeletons attributed to ancient Native American cultures, not biblical superhumans. And when they say “giants,” these historical accounts mention skeletons in the range of 7 to 10 feet tall. It’s entirely possible that a tribe of Indians were taller than the average person, but that doesn’t make them giants, unless, of course, we feel like classifying most basketball players in that category.

As much as we might like stories of the Big Friendly Giant, Paul Bunyan, or even Goliath, that doesn’t mean that men and women the height of the Empire State Building ever actually existed. Like many tales, the truth can get stretched out of proportion over time. That doesn’t mean giants didn’t walk the earth in their own right. It just means that we have to be a little less imaginative when we hear the word “giant.”