I like to think that I’m a fairly logical person. It takes a lot for me to even consider the possibility that something might actually be genuinely paranormal in nature. I tend to be suspicious of evidence as I think most people in the paranormal community tend to be as of late. Thanks to paranormal television and it’s capacity to categorize nearly anything as otherworldly, we’ve stopped taking a real interest in people’s personal experiences with the strange and the unexplainable. I like personal accounts and though I’m aware most are understandably clouded by any number of things, I think there’s something more interesting about them than a series of blurry photos taken in a dark building at night or. So, in keeping with this update’s theme, I’m going to tell you about my own personal account with the strange. While I’m certainly not expecting anyone to believe it solely on it’s own merit, I at least hope you’ll find it interesting. Five years ago in the early fall I was filming the last episode of The Girly Ghosthunters, a television series that focused on haunted locations across Canada. The location in question was a place in Ancaster, Ontario, lovingly deemed The Hermitage. Set deep in the surrounding Ancaster woods, the Hermitage is best described as the stone ruins of an enormous mansion, a mansion which burned to the ground on two separate occasions. To date, the site is a national historical monument and can be visited during daylight hours by way of a long snaking pathway through the woods. When I first was informed that the producers had gotten permission for us to film at this location, I was obviously ecstatic. The Hermitage has a very lengthy and blood-soaked history, but it was the grounds that were of particular interest to me seeing as they had been used as sacred ritual soil for the first nation’s people. After spending the previous months visiting many of Ontario’s purportedly “haunted” sites, I had found myself feeling more and more skeptical about the possibility of the paranormal with every location we’d visit. At that point during filming I had seen more than a few things that someone could classify as weird, but when you looked closely enough, they could easily be explained away. Needless to say, I was not prepared for the experience we had the night we filmed at the Hermitage, and even years later, it remains the one paranormal experience I’ve had that I can safely say has kept me guessing. We arrived on location in the afternoon and filmed a series of interviews with local paranormal investigators and Ancaster historians who gave us a better understanding of the actual history of the house and grounds. I still wasn’t convinced that anything unexplainable was happening and chalked most of the hype up to exaggerated campfire stories. The house was secluded in the woods far from the main entrance, clearly an eerie experience for anyone who had visited at night, and my logical brain told me that this was the reason so many people had claimed to have had experienced paranormal encounters.

Once darkness set in, we began to make our way down the large pathway leading into the woods towards the house. It was dark and the woods were loud. I was, reasonably, a little apprehensive, but logic weighed out and I knew the noises were most likely due to animals in the nearby brush. After making it roughly a quarter of the way down the path, I can remember hearing a large branch snap on the trail behind us, but before I had the chance to react I was being dragged the rest of the way by Jen Kieswetter, my fellow cast member, who was screaming incoherently. By the time we made it to the bottom of the path, she was in complete hysterics. In between sobs, Jen described seeing something moving very quickly down the pathway towards us. I hadn’t seen a thing. Though everyone was clearly upset by Jen’s reaction on the path, we decided to make our way around to the inside area of the Hermitage away from the pathway and the grassy front garden. At the bottom of the hill the face of the building lies toward you, and though the sides are collapsed in some places and held up by solid steel beams, the Hermitage still retains much of it’s original foundation. Trees from the woods have swallowed most of what would have been the lawns around the house, in some instances even the inside the area, which would have been the entertaining rooms. It was here where I saw what I’ve never really been able to explain. 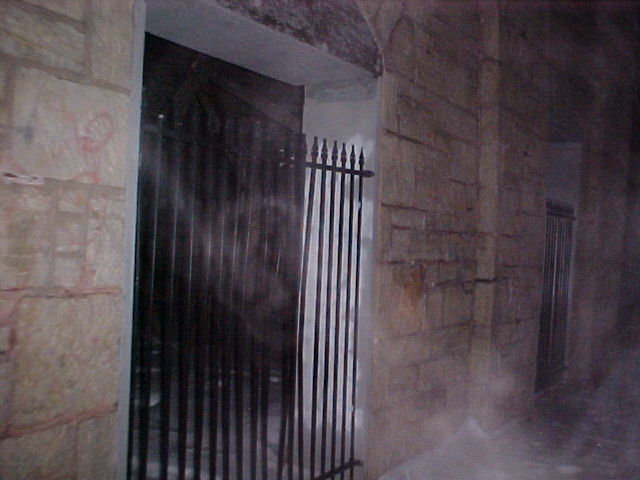 With my flashlight off, I knew that I had three members of the Girly Ghosthunters standing to my right, plus a camera man and audio woman off to our left, roughly 5 feet away. I hardly noticed it at first, only turning to face it when something moving in my peripheral vision caught my eye. It was standing about twenty feet away. It slid out from behind a tree and stood there for a solid minute without moving. It’s body was thin, appearing almost stretched, and had to have been at least 6’6. It had no substance to it at all.. it just fizzled like static on a television set against the dark night. For a moment, I thought I had lost my mind. I remember looking over to guage the reaction of the two-crew members to our left; they were dumbfounded, staring open-mouthed at the exact spot. I’m not proud to admit it, but I freaked out. Oddly enough, it wasn’t until we started to scream that it moved forward a few feet, hunching awkwardly, the kind of stance an animal goes into when it’s unsure about something. Suddenly, a few feet away, there was another smaller one to it’s right. Inside the Hermitage, there are a set of 8 foot tall safety bars to keep visitors away from the crumbling walls, and out of sheer panic, our entire group had unconsciously backed themselves up against the them. Some of us were crying, others staring silently at the two static shadows inching slowly closer to us, almost as if they were curious yet watchful at the same time. Then as quickly as it had started, the two shadows moved towards the woods to the left and disappeared into the trees. No one stuck around to see if they would come back. Everyone was, I believe understandably, in a state of panic. Keep in mind, during this whole experience our crew’s cameras and audio were rolling as the rest of the crew watched from the side of the building. Unfortunately, nothing was captured on film other then our reactions and the obvious commotion that transpired during the 5-minute event itself. In all honestly I’m sure I could find quite a few logical ways to explain what it was that we saw that night. Maybe it was nothing more then a group of people responding to each other’s reactions. Afterwards it seemed as if all the details coincided but then again maybe they didn’t and we were remembering the experience the way we wanted to. I’ve been back to The Hermitage since then and have never seen anything even close to what I saw that night or what I believe I saw. I’ve also, since that time, spoken with quite a few people since who claim to have had similar experiences in different parts of the world with comparable shadowy beings. Most aren’t claiming them to be anything but personal accounts, in which case you can either choose to believe or disbelieve. Either way, you can’t help but admit that it’s interesting.

So I pose this question to you readers of Week in Weird: what are your first hand accounts with the paranormal? I think it’s important not to forget the power of personal story when it comes to this hobby; it may not be what most classify as legitimate evidence, but then again, what evidence do any of us really have? As we all know, we have absolutely no way of proving or disproving anything that falls under the category of paranormal. I’d rather hear about yours and decide for myself.